The left’s strategy to block Kavanaugh from the Supreme Court

It’s been a month since Anthony Kennedy announced he would retire from the Supreme Court. But liberal groups have already launched an all-out campaign to pressure key senators ahead of the confirmation hearings for Brett Kavanaugh, who they say will drastically shift the balance of the court to the right.

“There’s been incredible mobilization across groups and leaders of organizations,” said Neera Tanden, the president and CEO of the left-leaning Center for American Progress. “Kavanaugh is a hard right replacement for a more swing justice.”

Center for American Progress and MoveOn are just a few of the well-established groups that have teamed up with newer liberal organizations like Indivisible, the health care-focused Protect Our Care and the progressive judicial advocacy group Demand Justice to drum up opposition to Kavanaugh.

A broader coalition of groups, including Planned Parenthood and the Sierra Club, are also actively opposing Kavanaugh. Tanden says that’s because people see Kavanaugh “as a threat across the board.”

Conservative groups are using their own tactics to persuade vulnerable senators to vote for Kavanaugh.

Yet it’s unclear how successful they’ll be. Conservative groups are using their own tactics to persuade vulnerable senators to vote for Kavanaugh. And last year liberal groups waged a campaign against Judge Neil Gorsuch, Trump’s first Supreme Court nominee, only to see him be confirmed.

Senate Democrats have few parliamentary moves at their disposal to block Kavanaugh’s confirmation. Ahead of Gorsuch’s confirmation vote, Senate Majority Leader Mitch McConnell, R-Ky., changed the Senate rules so that Supreme Court nominees could be confirmed by a simple majority, a move that eliminated the 60-vote threshold. Democrats remain on the wrong side of the 51-49 split in the Senate. And a handful of Democrats running for re-election in red states that Trump won in 2016 have to weigh whether they’ll vote along party lines against Kavanaugh or buck party leadership and and approve Trump’s nominee.

Sens. Joe Donnelly, D.-Ind., and Heidi Heitkamp, D-N.D., have not indicated how they plan to vote. Sen. Joe Manchin, D-W.Va., has urged his constituents to reach out to him with their thoughts on Kavanaugh; Manchin said in a statement that he is particularly interested in the judge’s views on health care. Donnelly, Heitkamp and Manchin were the only Democrats to vote for Gorsuch last year.

Conservatives are confident Donnelly, Heitkamp and Manchin will succumb to political pressure and vote with Republicans. All three are up for re-election this year in states that overwhelmingly supported Trump in 2016. McConnell is also planning to hold hearings and vote on Kavanaugh just weeks before the midterm elections, forcing vulnerable Democrats to be in Washington, rather than campaigning in their home states.

“Kavanaugh is a popular nominee with voters in those states,” said Carrie Severino, the chief counsel and policy director of the conservative Judicial Crisis Network. “It’s closer to their elections and makes the most sense to vote for constituents rather than lockstep partisan mode.” 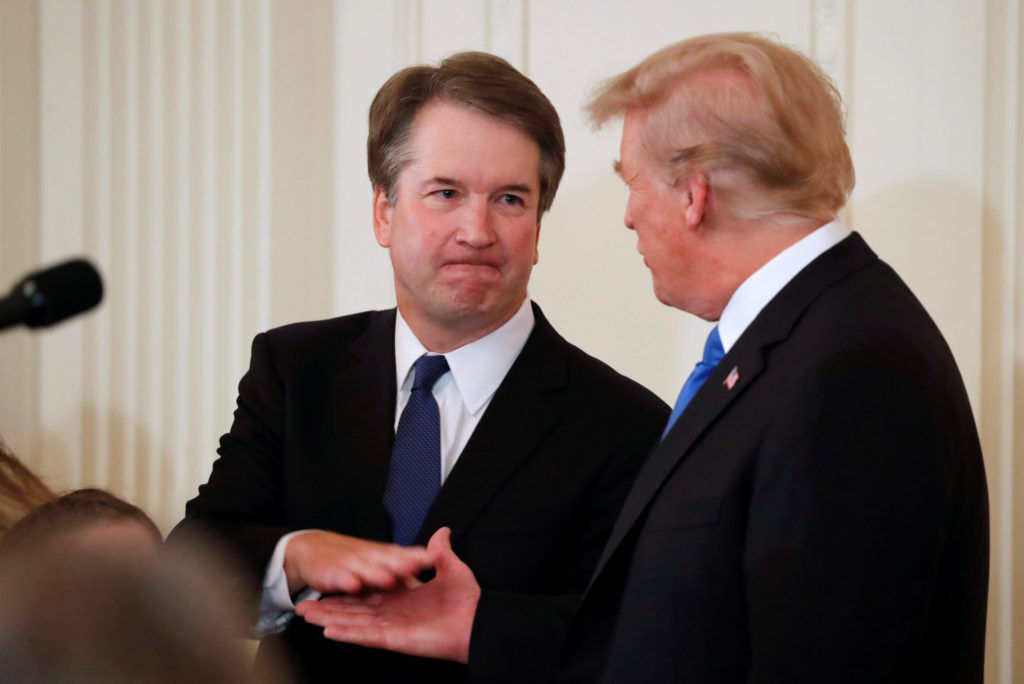 If confirmed, Supreme Court nominee Judge Brett Kavanaugh, left, would replace Supreme Court Justice Anthony Kennedy, who is set to retire at the end of the month. REUTERS/Jim Bourg

Liberal activists counter that the political environment has changed since last March, when Gorsuch was confirmed. Vulnerable red-state Democrats, the argument goes, would gain little in the waning days of their reelection campaigns by voting for Kavanaugh — and could lose support with progressive voters.

Right now, polls show Kavanaugh is a relatively popular figure. According to a July poll from the Wall Street Journal and NBC, 32 percent of voters approved of Kavanaugh and 26 percent opposed his nomination. Forty-one percent said they didn’t have enough information to know how they felt.

Still, Kavanaugh is considerably less popular than Gorsuch was in the lead up to his confirmation hearings, polls show. A CNN poll then showed 49 percent of Americans were in favor of Gorsuch’s confirmation to the Supreme Court.

Liberal activists drew parallels between this confirmation fight and their success in opposing efforts to repeal the Affordable Care Act repeal last year.

Elizabeth Beavers, the associate policy director for Indivisible, said the group learned during the fight over health care that the “baseline needs to be a united Democratic opposition.”

The key is “locally targeting only your member of Congress, and showing up in person and doing actions that actually make members listen,” Beavers said. “That’s the formula we followed in the ACA fight and we continue to follow that formula.”

A July poll from Kaiser Health shows a majority of Americans do not want the Supreme Court to overturn the Affordable Care Act or overturn specific provisions such as protections for individuals with preexisting conditions. Activists are also hoping Obamacare’s popularity and Kavanaugh’s past decisions suggesting he would rule against the health care law as a Supreme Court justice will put pressure on senators to vote “no.”

Kavanaugh is considerably less popular than Gorsuch was in the lead up to his confirmation hearings, polls show

“Red state Democrats are strong on health care and stood strong on repeal,” said Brad Woodhouse, the political director for Protect Our Care. “Democrats have an advantage going into the midterms and an advantage in their states on the issue.”

Severino, from the Judicial Crisis Network, downplayed the left’s strategy.

“Demand Justice launched similar [opposition] with Gorsuch and it fizzled out,” she said. “Democratic opposition is falling into the typical playbook. There’s no major surprises.”

GOP-aligned groups are also spending millions of dollars to pressure Donnelly, Heitkamp and Manchin, along with other red state Democrats like Sen. Claire McCaskill of Missouri and Alabama Sen. Doug Jones, to back Kavanaugh. Judicial Crisis Network alone has put more than $4.5 million towards ad buys in red states with Democratic senators.

And even if they stick together, Democrats alone cannot block Kavanaugh’s confirmation. For example, every Senate Democrat voted against the tax reform bill last year, yet the legislation managed to pass on a razor thin 50-49 vote, with no GOP defectors.

But Tanden says there’s more energy this time around. “I think people have a deep anxiety that the Supreme Court and judiciary will not act as check on Donald Trump for much longer, and that’s really energizing people.”