The legal battle over Trump’s D.C. hotel could be entering uncharted territory

President Donald Trump’s hotel in Washington, D.C., has sparked a running legal debate about conflicts of interest, pitting government lawyers against critics concerned with possible ethics abuses who claim the president’s stake in the property violates a constitutional clause against corruption.

The luxury hotel — which opened in 2016, weeks before the presidential election, at a prime location a few blocks from the White House — has led to three lawsuits over the Emoluments Clause, which prohibits U.S. officials from accepting gifts or payments from foreign governments.

Until now all three cases have been stalled in the courts, leaving open the question of whether the constitutional provision — which had never been tested before Trump took office — applies to a sitting president.

That could change later this month, when a federal judge is expected to decide whether one of the lawsuits can move forward.

The case was filed by the attorneys general of Maryland and the District of Columbia on behalf of local businesses and hotels. They alleged the president’s financial stake in the Trump International Hotel Washington, D.C., hurts competition in the area, because political leaders and government officials, both foreign and domestic, seek to book rooms at the hotel over comparable other hotels nearby, hoping to obtain access to the president.

In March, Judge Peter Messitte of the United States District Court for the District of Maryland ruled that the attorneys general had shown enough evidence of unfair competition for the case to proceed. Now, Messitte will rule on whether it can move to a discovery phase.

The attorneys general for Maryland and Washington, D.C., have said that if the case moves forward, they would seek a broad discovery that would include internal revenue documents from the Trump Organization, emails and depositions from Trump executives. They could also seek the president’s tax returns, though most legal scholars say it is unlikely that the judge would find the returns relevant enough to the case to allow that to happen.

The lawsuit was filed against Trump both as an individual and as president of the United States. Trump’s defense is being handled by lawyers for the Department of Justice.

In January of 2017, shortly before taking office, Trump announced that he would maintain ownership of the Trump Organization while president but hand the management of the company over to his two adult sons. Trump also said at the time he would place his assets in a blind trust to eliminate potential conflicts of interest. Critics have argued the arrangement hasn’t gone far enough to stop Trump from profiting from his business empire while in the White House. 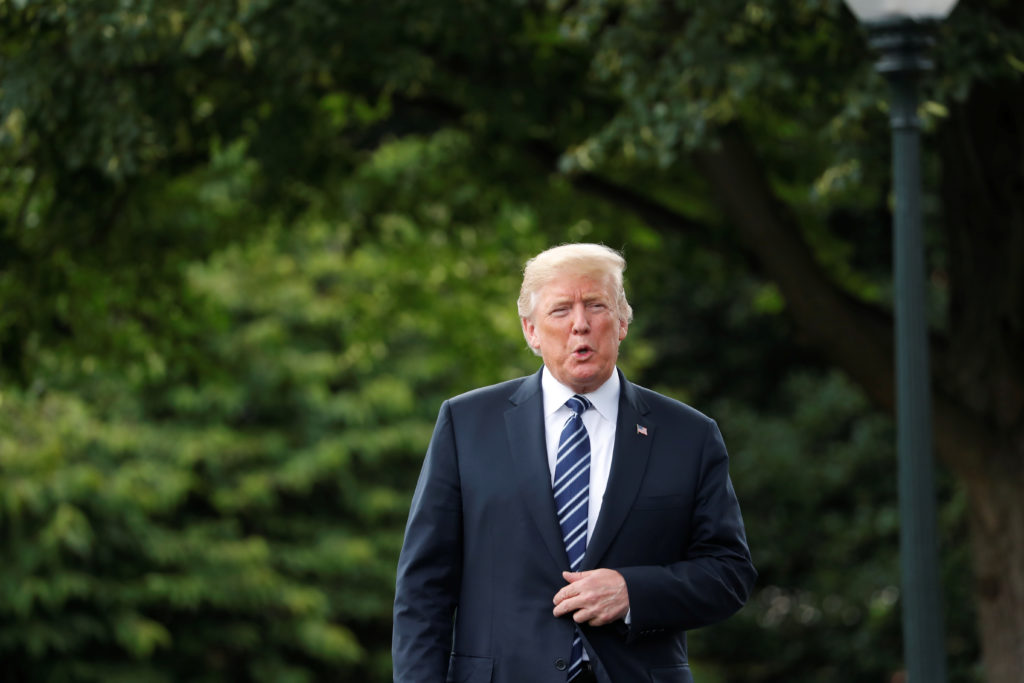 A federal judge is expected to issue a ruling later this month that could allow one of the lawsuits over President Donald Trump’s hotel near the White House to move forward. REUTERS/Carlos Barria

The administration could win this next round in the lawsuit if the judge blocks the case from advancing to the discovery phase. But if the case moves forward it would shift the legal debate into uncharted territory, both for Trump and for states pursuing an unprecedented legal challenge to a sitting president, said Andy Grewal, a law professor at the University of Iowa.

“President Trump’s own norms-breaking seems to have inspired norms-breaking by the states,” he said. “If this lawsuit proceeds, it could fundamentally change how alleged presidential misconduct is being addressed.”

The upcoming decision by Messitte could provide the clearest answer yet about whether an emolument under the Constitution can be defined broadly as any payment from a foreign government or state, or if an emolument only applies to situations in which a specific service is exchanged.

Deputy Attorney General Brett Shumate, who is representing the Trump administration in the case, argued in court that the president cannot control, and thus should not be held accountable for, a foreign agent’s “unilateral attempt to sow favor.” Shumate said the president should only be prosecuted when there is proof of corrupt intent.

If the case moves forward it would shift the legal debate into uncharted territory.

The attorneys general have argued that no direct influence or fulfilled promise is necessary for a gift to incentivize corruption.

Judge Messitte’s previous opinions in the case have been sympathetic to the plaintiffs’ interpretation of the Emoluments Clause, a sign that he could allow the case to move forward.

In his March ruling, Messitte accepted the plaintiff’s argument that the president’s stake in the Trump International Hotel in Washington gives the property an unfair advantage against other local competitors. The hotel “has had and almost certainly will continue to have an unlawful effect on competition,” Messitte wrote.

Messitte cited statements by foreign officials that Trump’s link to the hotel was why they booked it. The judge also cited Maine Republican Gov. Paul LePage’s various stays at the hotel as proof that Maryland and D.C. taxpayers and competitors are disadvantaged by Trump’s business ties.

Messitte did, however, limit the scope of the case to include only the Trump Organization’s Washington hotel, ruling out other properties such as the president’s Mar-a-Lago estate in Florida. 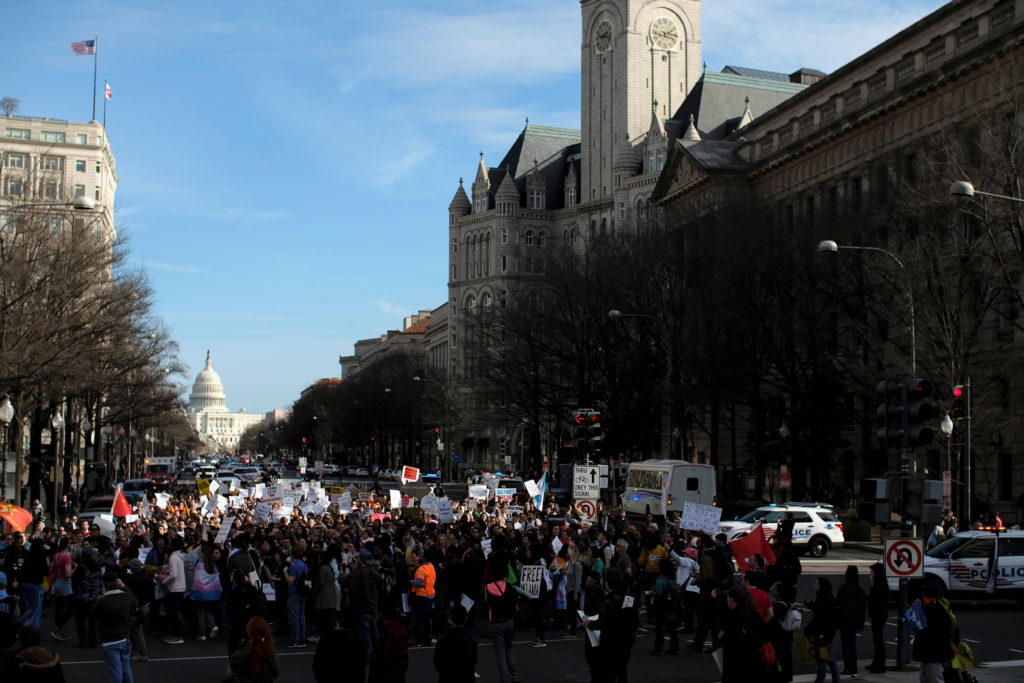 The Trump hotel in Washington, right, has become a popular gathering place for Republican power brokers. It has also become the scene of frequent anti-Trump protests. REUTERS/James Lawler Duggan

The Trump hotel in Washington officially opened for guests in October 2016, but already has surpassed other Trump properties to become one of the president’s most profitable holdings.

The hotel generated $40.4 million in revenue last year, according to Trump’s latest financial disclosure report, which was published in May. The report did not reveal what percentage of the hotel’s income came from foreign governments, but the its guest list has reportedly included lobbyists and representatives for many countries, including Malaysia, Kuwait and Saudi Arabia.

“How can the public be confident that the president is not being unduly influenced by foreign interests when he is making substantial profits from foreign spending at his hotel?” said Bies, who served as the deputy assistant attorney general in the Office of Legal Counsel under former President Barack Obama. The Emoluments Clause “is intended to avoid circumstances that raise this sort of suspicion,” he added.

Last year, the Trump Organization pledged to donate its profits from foreign governments to the U.S. Treasury at the end of every calendar year, and in February the company reported donating more than $150,000. But the company did not confirm what percentage of its total earnings from foreign governments the $150,000 represented. The judge’s ruling this month could force the Trump Organization to release records that would help clarify the numbers.

‘How can the public be confident that the president is not being unduly influenced by foreign interests when he is making substantial profits from foreign spending at his hotel?’

If the case moves forward, the donation will come under closer scrutiny, said Scott Amey, the legal council for the watchdog group Project on Government Oversight.

Questions remain about how the Trump Organization “came up with that total and whether it was a genuine figure,” Amey said.

The case could also inspire similar suits by competitors near other Trump hotels internationally, and reveal that Trump’s profits are much higher than the donations imply, Amey said.

If, on the other hand, the lawsuit is tossed out later this month, there are still two other active cases surrounding the Emoluments Clause that could impact the president.

One of the other lawsuits, filed by 200 congressional Democrats, claims Trump’s business ties are illegal unless approved by Congress. Grewal said the lawsuit is an attempt by Democrats “to convince their [Republican] colleagues to take action” and pass legislation addressing Trump’s businesses and potential conflicts of interest.

Administration lawyers have also argued that disputes over Trump’s businesses should be settled by Congress and not by the courts. Others have disagreed, arguing that congressional action on the issue would still be up for judicial review.

The third lawsuit accusing Trump of violating the Emoluments Clause was filed by Citizens for Responsibility and Ethics in Washington in January 2017. The case was dismissed in December by a Manhattan judge who ruled the case lacked legal standing. The group filed for appeal in February, and the appeal is still pending.

Left: The Trump International Hotel in downtown Washington, D.C., has sparked a legal debate, and several lawsuits, over the Emoluments Clause of the Constitution. Photo by Carlos Barria/Reuters