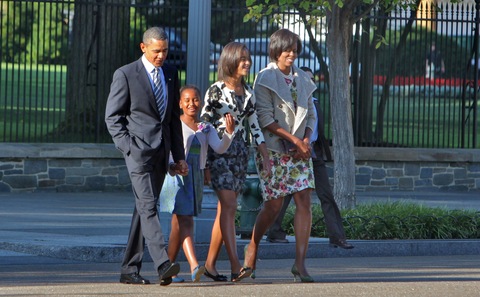 President Obama kicks off his week with a live, one-hour town hall on CNBC focused on jobs and the economy. This is as close as it gets to talking directly to Wall Street without halting trading and using a megaphone on the floor of the stock exchange. It’s also a media-dominating event that will drive news coverage for the White House for the first half of the week.

Later this week, President Obama tends to foreign affairs at the United Nations General Assembly and the Clinton Global Initiative in New York. With only six weeks to go before Election Day, the White House scheduled the town hall as insurance that the president’s agenda on jobs and the economy would not be lost amid all those foreign heads of state causing traffic jams in Manhattan.

After the town hall, which begins at noon EDT, he heads to Philadelphia to help fill the campaign coffers of Rep. Joe Sestak, D-Penn., who is struggling in his Senate bid. (He’ll also raise some coin for the Democratic National Committee.)

The president has two clearly defined missions for the next 42 days: He’s going to raise as much money as he can to help build firewalls for Democrats across the country; and he’s going to try to shake the apathy that seems to be pervasive in the base of the Democratic Party this election season.

Just for fun, you may want to count how many times President Obama and Vice President Biden have been to Pennsylvania and Ohio just over the course of last six weeks. These two critical general election states for President Obama in 2012 also provide the key to this year’s midterm elections.

The Democratic majority in the House will likely either survive or fall based on the results in these two states. Both Democratic governorships appear poised to go to the Republicans this year in advance of next year’s redistricting process, with its decade-long impact on the national political landscape. And with a failed attempt by the Democrats to turn Ohio into a pickup opportunity in the Senate combined with Sestak’s current poll position behind Pat Toomey, these states have scrambled the map for Democrats.

With the midterm elections still six weeks away, jockeying for the Republican presidential nomination in 2012 has already begun.

Indiana Congressman Mike Pence sparked a boomlet of attention over the weekend. The third-ranking Republican in the House won a straw poll of social conservatives at the Values Voter Summit in Washington, D.C.

On ABC’s Good Morning America Monday, Pence downplayed his straw poll victory and said his focus was on winning a Republican majority in the House this fall. “We’ll let the future take care of itself,” said Pence.

The five-term Indiana lawmaker addressed the crowd Friday, urging the country not to lose sight of social concerns while solving its fiscal problems. “We will not restore this nation with public policy alone. It will require public virtue. And that emanates from the traditional institutions of our nation: life and family and religion,” said Pence.

Palin was the only top-five finisher not to address the summit, speaking instead to a different gathering of Republicans Friday at Iowa’s Ronald Reagan Dinner in Des Moines.

“It is the season when candidates — and their events — are everywhere, but Ms. Palin spent little of her time with them. She did not appear at a rally, impromptu campaign stop or closed-door one-on-one meetings with party activists. The few Republicans who did get a moment of private time with her had to wait in a photo line at a small reception.
When politicians accept speech invitations at party occasions, particularly outings like the annual Ronald Reagan Dinner, they often do a host of behind-the-scenes events. It is a mutually beneficial arrangement. But Ms. Palin declined to do any additional appearances. Instead, she went for a run.”

Ben Smith of POLITICO also looks at whether the former vice presidential nominee and her political operation in Iowa are prepared for a 2012 run.

“Palin made clear she is considering running for president but showed no sign that she plans to engage in the painstaking, humbling contest that will begin here in Iowa later this year,” writes Smith.

You only need to get to the fifth paragraph of Monday’s lead story in the New York Times to find the full-throated White House denial of the main premise of the story.

“President Obama’s political advisers, looking for ways to help Democrats and alter the course of the midterm elections in the final weeks, are considering a range of ideas, including national advertisements, to cast the Republican Party as all but taken over by Tea Party extremists, people involved in the discussion said.”

“White House and Congressional Democratic strategists are trying to energize dispirited Democratic voters over the coming six weeks, in hopes of limiting the party’s losses and keeping control of the House and Senate. The strategists see openings to exploit after a string of Tea Party successes split Republicans in a number of states, culminating last week with developments that scrambled Senate races in Delaware and Alaska.”

“‘We need to get out the message that it’s now really dangerous to re-empower the Republican Party,’ said one Democratic strategist who has spoken with White House advisers but requested anonymity to discuss private strategy talks.”

Though the White House is firm that there are no plans for a national advertising strategy, it’s not as if Democrats trying to tie the Republican Party as closely as possible to the Tea Party is a new idea.

It was less than two months ago when President Obama’s handpicked chairman of the Democratic National Committee, Tim Kaine, called a news conference to declare the Republican Party and Tea Party one and the same.