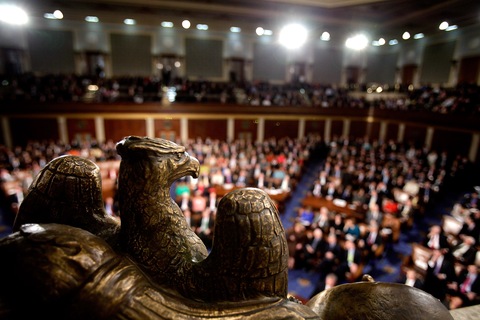 Candidates, political parties and outside interest groups have spent an estimated $198 million on advertising for U.S. House and Senate races in the past five weeks, according to a study released Wednesday by the Wesleyan Media Project.

The total represents a 75 percent increase from the same period just two years ago, with spending on Senate races up 84 percent while House races have seen an increase of 65 percent. It’s worth noting that 2008 was a presidential election year, so most of the money was directed towards that year’s big prize.

On the Senate side of the ledger, candidate spending grew by nearly 146 percent and that of interest groups by 92 percent between Sept. 1 and Oct. 7. But, party spending on Senate ads dropped by almost 61 percent.

When it came to House races, all three saw increases – 57 percent by candidates, 9 percent by political parties and a whopping 192 percent by interest groups.

Michael Franz, associate professor of government at Bowdoin College and co-director of the Wesleyan Media Project, offers this analysis: “Breaking down the air war by party reveals big advantages to Republicans in both party and interest group investment in federal races. Combining party and coordinated totals, Republicans are outspending Democrats by almost 3 to 2.”

Co-director Erika Franklin Fowler of Wesleyan University suggests the money trail indicates House races are at the center of the midterm struggle. “The evidence is clear: the focus right now is on control of the House. Both parties and interest groups are taking aim at key House district races, flooding the airwaves in hopes of gaining at the margin,” said Fowler.

The study also estimates that $367 million has been spent on House and Senate advertising since the beginning of the year.

Can a freshman Democrat running in a Republican leaning seat who voted for the big ticket Pelosi-Obama agenda items (stimulus, cap and trade, health care reform) get reelected in this 2010 political environment?

Welcome to the laboratory that is Virginia’s fifth congressional district, where Rep. Tom Perriello, D-Va., is running for a second term without the Obama surge of support that flipped the commonwealth from Red to Blue on the election night map in 2008 for the first time since 1964.

One Democratic Party leader once referred to Perriello as “the great experiment.” At a time when party leadership and their allied outside liberal groups are deciding which races are no longer winnable, Rep. Perriello’s uphill battle in his Charlottesville area district has not yet fallen off the map.

With less than two weeks to go before Election Day, the politically potent labor union SEIU is launching a new ad in the district going after Perriello’s Republican opponent Robert Hurt for his opposition to an extension of unemployment benefits.

The total cost of the ad buy is $293,000 and will run for one week beginning today on broadcast and cable television in Roanoke and Richmond and on cable in Charlottesville.

The 54 percent to 43 percent likely voter lead is far greater than the three point lead Blumenthal had in the last Quinnipiac poll at the end of September.

Even in this election year with all the wind at the backs of Republicans, a heavily Democratic state like Connecticut was bound to be a tough slog for McMahon. But it appears the progress she (and her pledged $50 million for her campaign) was making over the summer has been halted and reversed.

The New York Times takes a look today at McMahon’s woman problem. Women voters tell the Times that the barrage of ads and her wrestling pedigree are turning them off to McMahon’s pitch.

The Quinnipiac poll backs up the Times reporting. Blumenthal has a significant lead among women voters. Women back Blumenthal 63 percent to 32 percent while men back McMahon 52 percent to 46 percent in the poll out this morning.

Already having shattered the record for personal spending in a U.S. political campaign, Meg Whitman opened up her checkbook yet again this week to the tune of $20 million. The infusion of cash, revealed in a financial disclosure report Tuesday, brings to $141.5 million the total spent by the former eBay CEO in her bid to become California’s next governor.

Whitman has pledged to spend upwards of $150 million on the race, a target within her reach with a little less than three weeks left until Election Day.

The $20 million contribution leaves Whitman with about the same amount in the bank as her Democratic opponent, Jerry Brown, California’s attorney general. Brown has $22.5 million in the bank for the stretch run but has spent only about $11 million on the race so far.