The Morning Line: Back in the Saddle 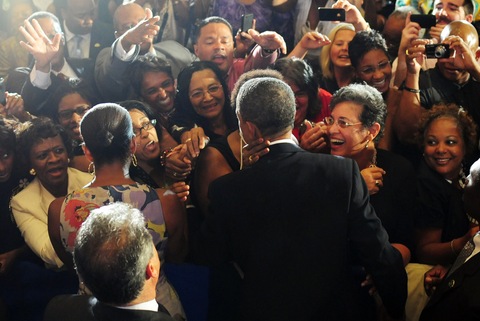 President Obama and first lady Michelle Obama greet the crowd Sunday at Xavier University in New Orleans for a ceremony on the fifth anniversary of Hurricane Katrina. Photo by Jewel Samad/AFP/Getty Images.

We’ll catch only one glimpse of President Obama on his first day back at the White House after what must have been a welcome vacation on Martha’s Vineyard with his family.

That glimpse will be some quick video and photos of the president receiving his daily economic briefing. The White House clearly wants to show President Obama on top of the most pressing issue on the minds of Americans. But some fleeting video of a meeting with his economic team might have a tough time breaking through the other items on his plate.

In New Orleans on Sunday, President Obama marked the fifth anniversary of Hurricane Katrina coming ashore and promised the federal government’s continued assistance in rebuilding that city. He also sat down for an interview with NBC’s Brian Williams, which created more headlines about the mistaken belief that he’s not Christian or that he wasn’t born in the United States than about Katrina or the economy.

On Tuesday, President Obama will head to Ft. Bliss, Texas, to mark the complete withdrawal of combat forces from Iraq before returning to Washington, D.C., to address the nation from the Oval Office in a primetime address on that subject.

(Be sure to check out the New York Times’ Peter Baker’s masterful look at President Obama’s handling of his duties as commander in chief.)

And that’s all before the president caps off the week by hosting the Israelis and the Palestinians for the first direct peace talks between the parties in 20 months.

President Obama is indeed back in the saddle following his vacation, but it’s unclear if he’s riding the right horse this week.

By most accounts, Saturday’s “Restoring Honor” event at the Lincoln Memorial was more spiritual revival than political rally.

Standing where Martin Luther King Jr. delivered his “I Have a Dream” speech 47 years earlier, conservative commentator and organizer Glenn Beck said, “America today begins to turn back to God.”

Former Republican vice presidential nominee Sarah Palin played off the name of the rally, urging those in the crowd to “restore America and restore her honor.”

A group of civil rights activists led by Rev. Al Sharpton held a counter-rally at a Washington, D.C., high school, followed by a three-mile march to the site of a planned King memorial near where the Beck event took place hours earlier.

For more on the NewsHour’s coverage of Saturday’s dueling rallies, click here.

Saturday’s primaries in Louisiana delivered little in the way of surprises, except possibly the margin of victory.

The results in West Virginia turned out as expected, with Democratic Gov. Joe Manchin and Republican businessman John Raese each scoring convincing victories in their primaries, setting up a special election matchup in November for the remaining two years of the late Sen. Robert Byrd’s term.