The Morning Line: Desert Debate: Reid and Angle Do Little to Alter the Race 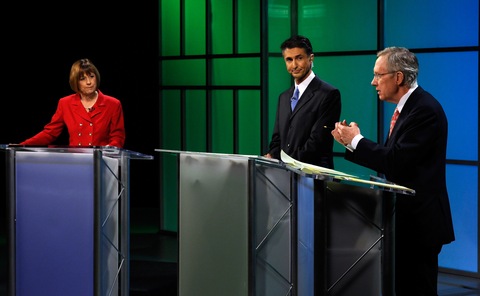 The one and only debate in the marquee Senate race of they 2010 cycle won’t likely prove to be a game changer in the contest.

But it did have a little bit of everything for Nevada voters. “Man up, Harry Reid,” Sharron Angle said in one of her prepared zingers of the evening in response to a question about Social Security.

Senate Majority Leader Reid attempted to paint former Nevada Assemblywoman Angle as an “extreme” right wing candidate. This is the message behind the avalanche of negative TV advertising that Reid has up on the air in the Silver State too.

For her part, Angle used every chance she could to tie Reid to “Obamacare” and a broken Washington.

Adam Nagourney of the New York Times writes up their exchange over the upper most issue on voters minds:

“My job is to create jobs,” he said, looking into the camera as he addressed a state burdened with the highest unemployment rate in the nation. “What she is talking about is extreme: We have to do it.”

And that may prove to be the biggest problem for Reid. The polls show the race extraordinarily close. Nobody should be surprised if this goes into overtime with a recount.

Angle did not implode on the debate stage last night and that was pretty much all she had to accomplish. She did not appear to be the caricature that the Reid campaign has worked incredibly hard to draw for the last four months.

Though that clearly won’t stop the Reid campaign from drawing it. Immediately following the debate the campaign launched a new television ad using Angle’s response to a question about whether insurance companies should be mandated to cover any types of exams or procedures.

The final numbers are in and for the first time in 70 years Republican turnout in statewide midterm primaries exceeded that of Democrats. But, overall turnout this cycle was the second lowest ever.

The findings were part of a study released Thursday by Curtis Gans of American University.

In the 42 states that held statewide primaries for both parties turnout was 33.8 million, or 17.8 percent of age-eligible voters, lower than any midterm season with the exception of 2006, when 16.1 percent of eligible voters cast primary ballots.

Republican turnout in the 46 states with GOP primaries was 19.3 million, or 9.8 percent of eligible voters, the highest since 1974 when 10.4 percent cast their ballots.

In the 42 states with Democratic primaries, turnout by Democrats was 15.5 million, or 8.2 percent of eligible voters. That performance was a new record low for Democrats, trumping the 9 percent who voted in 2006.

The GOP’s 3.8 million vote advantage was the first such victory for the party since the 1930 midterms.

For all the talk about the enthusiasm on the political right this year, Gans notes: “Turnout for winning Tea Party endorsed candidates averaged only six percent of the eligible electorate, indicating that in least some states those candidates might reduce the chances for Republicans to take both Houses of Congress.”

Gans goes on to say:

“The Tea Party may prove a double-edged sword for the GOP. Those who identify themselves as part of the Tea Party surely provided some of the energy that propelled Republican turnout upward. But their position at the edge of the political spectrum and the relatively low turnout for most of their statewide candidates may make it difficult for the GOP to garner sufficient votes in some states to overcome potential Tea Party aversion.”

President Obama and Vice President Biden will be in Wilmington, Del., Friday in an effort to shore up the party’s chances of holding onto the U.S. Senate seat once held by Mr. Biden.

The two top Democrats will appear together at a 1:30 p.m. ET campaign event for the party’s Senate nominee Chris Coons, who is running against Christine O’Donnell. The Tea Party insurgent knocked off moderate GOP Rep. Mike Castle in last month’s Republican primary.

Several recent polls have Coons leading O’Donnell by anywhere from 16 to 21 points.

At Thursday’s daily briefing, White House Press Secretary Robert Gibbs was asked why the president and vice president were devoting their time to a race that seemed well in hand. Gibbs responded, “[I]t’s an important race that we certainly hope and expect to win.”

Mr. Obama will be joined on the trail by First Lady Michelle Obama at two Ohio events this Sunday. The first couple will help Gov. Ted Strickland raise some coin at an afternoon fundraiser in the Cleveland area. Later they will attend a rally, organized by the Democratic National Committee, on the campus of The Ohio State University in Columbus.