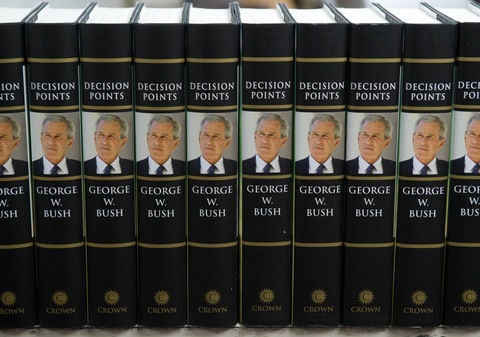 Tuesday marks the official release of former President George W. Bush’s memoir, “Decision Points,” in which he reflects on the most significant decisions he made as president, as well as in his personal life.

Mr. Bush’s media blitz to promote the book began Monday night in a taped interview with Matt Lauer of NBC News that saw the former president accept blame for some controversial decisions while giving a forceful defense of others.

“No question it was a mistake,” Mr. Bush told Lauer about standing under a “Mission Accomplished” banner in 2003 to announce the end of major combat operations in Iraq.

On his decision to fly over New Orleans in Air Force One to view the destruction left by Hurricane Katrina but not touch down to meet with local and state officials, Mr. Bush said it was a “huge mistake” that made him look “detached and uncaring.”

But Mr. Bush also stood by some of his other actions that have drawn criticism, such as his approval of waterboarding to interrogate Khalid Sheikh Mohammed, plotter of the Sept. 11 terror attacks.

“Use them,” he ordered, when told the technique, which simulates drowning, was legal. Asked by Lauer why he thought the method was legal, Mr. Bush responded: “Because a lawyer said it was legal. He said it did not fall within the anti-torture act. I’m not a lawyer, and — but you’ve got to trust the judgment of people around you, and I do.”

Lauer also pressed Mr. Bush on not finding weapons of mass destruction in Iraq, which the administration used as the main rationale for going to war. Lauer asked whether the former president considered apologizing to the American people for the intelligence failure.

In his first newspaper interview since leaving office in January 2009, Mr. Bush told USA Today he was “blindsided” by the financial crisis but said Congress should have supported his administration’s proposal to regulate mortgage lenders Fannie Mae and Freddie Mac more closely.

The former president has also taped an interview with Oprah Winfrey that will air Tuesday and has a handful of other media appearances scheduled in the coming days.

The Peter G. Peterson Foundation plans to launch a national campaign Tuesday aimed at getting the public more engaged and invested in controlling America’s debt and long term deficits.

The foundation is attempting to hit a news vacuum between the end of a campaign season that focused more than most on debt and deficits and the release of the Bowles/Simpson presidential commission report with suggestions on how to address a growing debt and deficit crisis.

A fictional 2012 presidential candidate named “Hugh Jidette” (get it?) seems to be at the heart of the advertising campaign to be unveiled Tuesday.

Be sure to check out this clever teaser video complete with the “I’m Hugh Jidette and I approve this message” tag line and recent appearances by the crop of non-fictional 2012 contenders.

With the upcoming release of the president’s debt commission report and congressional debate over raising the debt limit, it’s unlikely that the political rhetoric surrounding America’s deficit problems will recede anytime soon.

All of the 2012 Republican presidential hopefuls who are carefully plotting out their campaigns plans will no doubt dedicate a significant piece of their platforms to putting forth solutions to rein in the debt and deficits. These issues were at the core of the Tea Party movement over the last two years, and every Republican contender will try to find a way to woo some of that Tea Party energy into their campaigns.

Today, the president finds his approval ratings upside down in the Democratic-leaning Garden State, while the Republican governor, Chris Christie, finds himself getting good marks.

According to a Quinnipiac University poll out Tuesday, Gov. Christie has a 51 percent approval rating and a 38 percent disapproval rating. When poll respondents were asked to give him a letter grade, 48 percent gave him an A or B on his first year in office.

President Obama’s approval rating stands at 46 percent compared to 50 percent who disapprove of the way he is handling his job.

Christie was a hot commodity on the campaign trail this season. Before there was Scott Brown, there was Chris Christie, a Republican who won in a Blue State just 10 months after Mr. Obama was sworn into office. He was the first glimpse of the wave yet to come.

No matter how much Christie categorically denies interest in running for president in 2012, his name still crops up in the presidential parlor game. The poll shows New Jerseyans agree with Christie that he’s not quite ready for the White House.

Per Quinnipiac: “New Jersey voters say 61 – 24 percent that Christie would not make a good president. Even Republicans say only 45 – 36 percent that their governor is ready for the White House.