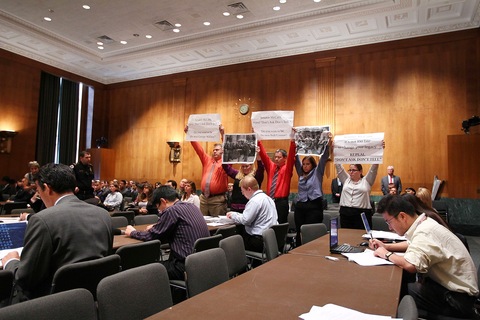 A bill authorizing defense spending next year may once again need the muscle of two moderate Maine Republicans just to start debate on it. Susan Collins and Olympia Snowe are the target votes that Senate Majority Leader Harry Reid needs to reach 60 votes to proceed. Even if he gets their votes, however, there may not be time to finish and pass the legislation before the midterm elections, according to Reid.

The measure would authorize $725.7 billion for security programs in the Defense and Energy departments in fiscal year 2011. Reid is trying to cobble together votes with Republicans who want to add amendments and Democrats who are undecided about whether to support the bill in its current form.

Attached to the bill is a repeal of “Don’t Ask, Don’t Tell,” the ban on openly-gay people serving in the military, as as well as an amendment called the DREAM Act that would set a pathway to citizenship for children of illegal immigrants who maintain high academic achievement. Both amendments appeal to the liberal wing of the Democratic Party.

The strategy may be a heavy lift for Reid in this election-driven climate, because it appears he would prefer to keep Republican amendments to a minimum while still lobbying for GOP support and rallying the Democratic base.

Republicans John McCain of Arizona and Lindsey Graham of South Carolina described the strategy “as politics at its worst.”

Collins and Snowe are uncommitted on whether or not they will vote to proceed on the bill, a position that has worked to their advantage in other high-profile pieces of legislation, most notably health care reform.

Two Democrats, conservatives Jim Webb of Virginia and Ben Nelson of Nebraska, have not yet said if they will vote to proceed to debate. The procedural vote is scheduled for this afternoon at 2:15 p.m. EDT.

It was a fundraising sweep by Democrats in August, with all three of the party’s campaign committees outperforming their Republican counterparts.

The Democratic Senatorial Campaign Committee brought in $7.4 million, while the National Republican Senatorial Committee took in a little over $6 million.

In dueling statements, both campaign committees sought to lay claim to having the momentum on their side as the cycle enters the home stretch.

Still, the NRSC holds a slight advantage when it comes to cash-on-hand, with $24.5 million versus $22.9 for the DSCC.

“[T]he NRSC is well-prepared to go on offense in battleground states around the country as we work to hold the Democrats accountable for their reckless spending agenda and fight to restore checks-and-balances in Washington,” said NRSC executive director Ron
Jesmer.

On the House side, the Democratic Congressional Campaign Committee raised $8.3 million last month compared to $6.6 million for the National Republican Congressional Committee.

The DCCC entered September with a little more than $39 million in the bank, while the NRCC had $25.6 million.

Both committees spent heavily on independent expenditures such as television ads, while members were in their home districts for the August recess. The DSCC dropped nearly $5.1 million last month, while the NRCC spent $3.1 million.

While polls show Republicans hold an advantage when it comes to enthusiasm among likely voters this fall, August’s fundraising totals should allow Democrats to flood competitive states and districts in the closing weeks in hopes of fighting off a Republican takeover of one or both houses of Congress.

You can read the reports below:

WHAT HAPPENED TO HOPE AND CHANGE?

President Obama’s 2008 election was marked by near record voter turnout and increased participation among minorities and young people. But now it’s 2010, and the Democrats who so benefited from this wave seem destined to suffer a significant backlash from voters.

A study out Tuesday from Project Vote attempts to answer that question by asking 2008 voters what they think about the country. The study focuses on identifying the groups with increased turnout in 2008 — blacks, low-income voters and young people — and comparing their concerns to that of survey respondents who said they identify with the Tea Party movement.

Project Vote estimates that 29 percent of the 2008 electorate identifies with the Tea Party, while 32 percent was black, young or low-income.

The study found that blacks, youths and low-income voters in 2008 are both less well-off and more satisfied about the direction of the country than Tea Party sympathizers. While 93 percent of Tea Party was dissatisfied with the direction of the country, that figure for low-income voters was 64 percent. Just 52 percent of blacks reported being dissatisfied.

The poll also asked if respondents in the past year have not had enough money to eat. While 5.2 percent of Tea Party respondents said yes, that figure was 39 percent for low-income people. Project Vote also found that, unsurprisingly, that black, young and low-income voters has much higher levels of support for government action to improve the economy that Tea Party voters did.

Lorraine C. Minnite, the author of the study, argues that the poll shows that the media is paying too much attention to the concerns of the mostly white and better-off Tea Party.

“‘Tea Party’ voters do not speak for all Americans, and they are severely disconnected from the experiences and views of lower-income, black, and young Americans. The fascination with the Tea Party on the part of reporters, pundits, and politicians does a
disservice to our nation; it buries any discussion of the needs and concerns of the average American, and almost completely overlooks the views of younger, lower-income, and black voters who cast ballots in 2008,” Minnite writes.

This nugget of information in the poll doesn’t bode well for Democrats in 2010. Among young voters, three in five approve of President Obama’s job performance, but only 52 percent say they will vote for a Democrat in 2010.

Linda Scott contributed to this report