More than a year after U.S. government workers in Cuba reported hearing a series of strange sounds that made them ill, investigators still aren’t sure what caused the “sonic attacks,” or who is responsible, State Department officials told a Senate hearing on Tuesday.

Part of the issue: There remains little proof of these attacks. In a draft FBI report obtained by the Associated Press, the agency says it has no evidence that sonic waves caused damage to Americans’ health in Cuba.

Secretary of State Rex Tillerson and other State Department officials disagree with that assessment. They announced at the Senate Foreign Relations Subcommittee on Western Hemisphere’s hearing that Tillerson would form an Accountability Review Board to investigate the incidents. It will convene sometime next week, they said.

Here’s what we know, and what questions remain.

U.S. personnel first reported hearing strange sounds in their homes on Dec. 30, 2016. (You can hear a recording of the high-pitched chirping sound some diplomats were hearing here.)

At least 24 U.S. Embassy personnel reported hearing the sounds. The Canadian government has also identified workers in their embassy in Havana who were affected. Individuals reported symptoms including sharp ear pain or hearing loss, nausea, vertigo, and trouble focusing or walking.

Dr. Charles Rosenfarb, medical director at the Bureau of Medical Services at the State Department, said all 24 victims identified suffered a pattern of injuries “most likely related to trauma from a non-natural source,” and something a patient with a “mild traumatic brain injury” would experience.

Embassy personnel said they continued to hear the sounds through August 2017.

While many have described the incidents as “sonic attacks,” the FBI has said it has no evidence of sound waves being deployed in the area. Todd Brown, diplomatic security assistant director for international programs at the state department, said Tuesday that it’s too early to rule out another cause for these symptoms, such as a viral attack.

Cuban officials have also suggested that the sounds are sounds are similar to the cicada insect common on Cuba’s north coast.

“It’s the same bandwidth and it’s audibly very similar,” Lt. Col. Juan Carlos Molina, an official with the Cuban Interior Ministry, said on a televised broadcast on state media in October. “We compared the spectrums of the sounds and evidently this common sound is very similar to the sound of a cicada.” 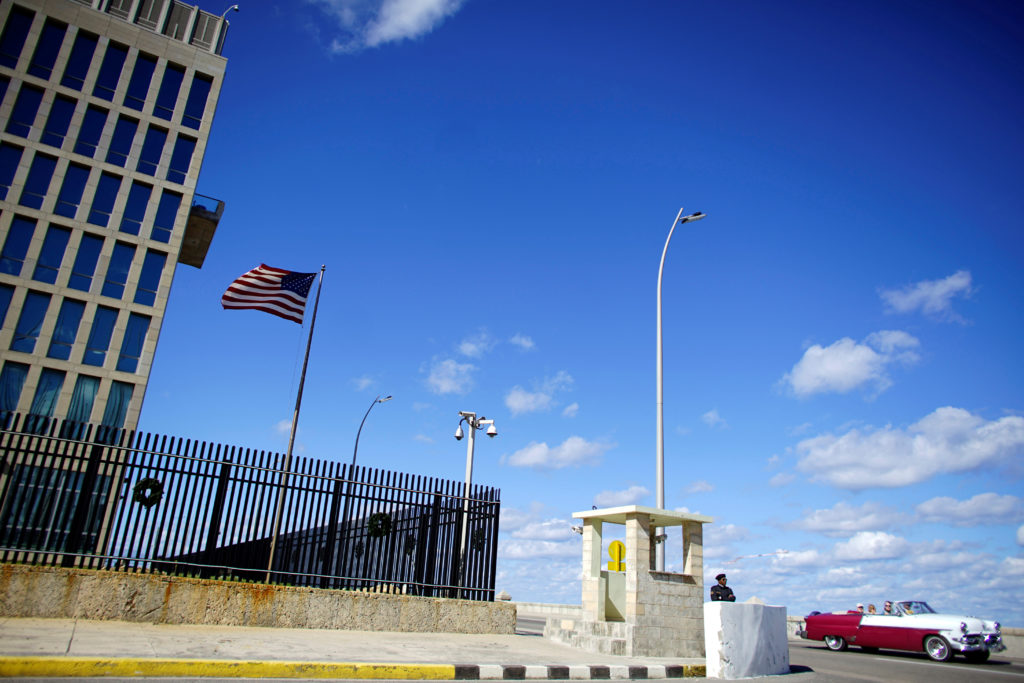 A vintage car passes the U.S. Embassy in Havana, Cuba on Dec. 12. Photo by Alexandre Meneghini/Reuters

The State Department says they cannot say categorically that staffers would be safe from another attack if they returned to the country.

The FBI opened an investigation into the sound attacks in May. It’s not clear whether the classified report obtained by the AP will be released.

Tillerson was made aware of the attacks in late February 2017, but had contradicting information until August, officials said Tuesday, when, with additional reports of these attacks, “it became apparent that we should begin process of looking at board.”

Under Secretary of State for Public Diplomacy and Public Affairs Steve Goldstein told reporters Tuesday that the state department expects to have the announcements of the chair and members of the accountability review board within the next week.

Subcommittee Chairman Marco Rubio, R-Fla., asked why it had taken so long for Tillerson to form the board, saying Tillerson is required by law to launch a review within a 120-day period of initial reports of serious injury to U.S. personnel overseas.

Goldstein said it took time to set up the board because “we were hopeful that we would be able to know what occured.” Rubio argued that wasn’t the process the law requires.

The Cubans are conducting their own investigation. Palmieri said at the hearing that the Cuban government shared their initial findings, and Brown testified that he was not aware of any new information that came from it. He also noted that the U.S. Embassy has reported an increased Cuban security presence in their residential areas.

In a tweet on Tuesday, Johana Tablada, deputy director for North America at the Cuban Ministry of Foreign Affairs, said it was “regrettable to see officials of the State Department using the word attacks with ZERO evidence to prove it happened. Ignoring the essential aspects of the topic, including the #USA and #Cuba specialized professional agencies opinions, it is not the right way to go.” 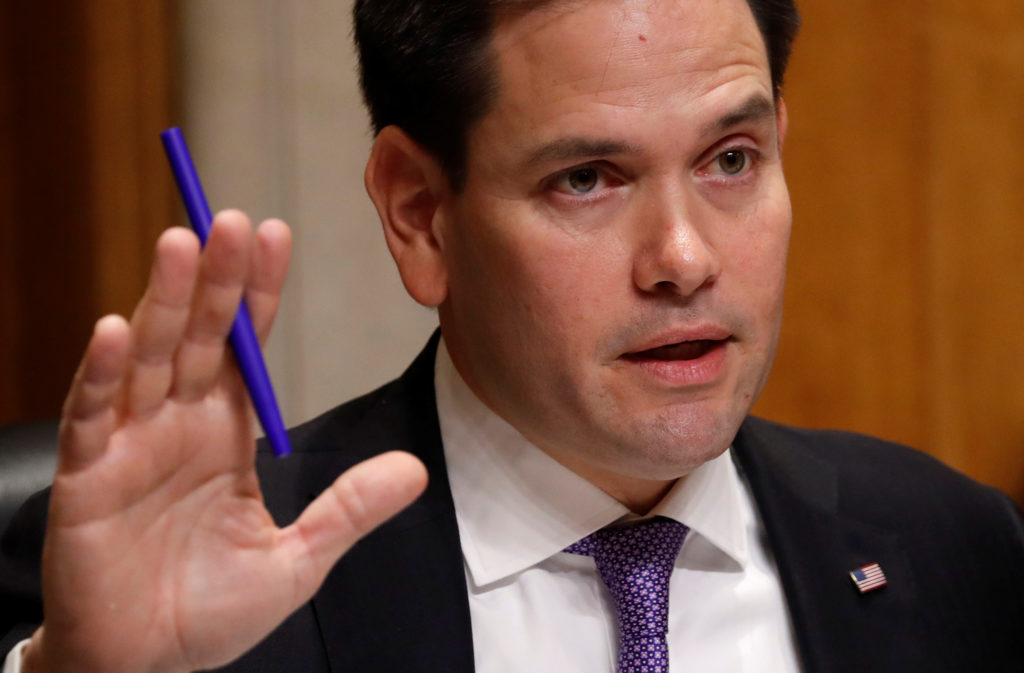 President Donald Trump said in October that he believed the Cuban government is responsible for the attacks. The same day, the State Department sent a cable to all overseas U.S. posts noting that it has “not assigned blame to the Government of Cuba.”

“The Cuban government either did this or knows who did it,” Rubio said Tuesday, saying it’s hard to believe an attack would escape the country’s massive security infrastructure. He also suggested the attacks could have come from a third country.

“The Cuban government either did this or knows who did it.” – Sen. Marco Rubio.

Sen. Bob Menendez, D-N.J., mentioned a defense agreement Cuba and Russia signed in 2016 and asked if the State Department had raised the issue with Russia.

Palmieri said he would have to address that issue in a classified hearing.

The interim FBI report obtained by the AP indicated the agency “will keep investigating until it can show there’s been no intentional harm.”

Secretary of State Rex Tillerson told the AP on Jan. 5 that he wasn’t convinced the “deliberate attacks” were over and said he was right to remove the personnel. If he sent diplomats back to Cuba, “I’d be intentionally putting them back in harm’s way. Why in the world would I do that when I have no means whatsoever to protect them?” he said.

Brown said he cannot say categorically that staffers would be safe from another attack if they returned to the country.

Goldstein echoed the sentiment Tuesday, telling reporters the state department is not considering restoring staff at the embassy and “we have also made it clear that if people do not want to serve in that particular embassy, they do not have to,” he said.

U.S. personnel heading to Cuba are now required to undergo a pre-deployment health screening, Rosenfarb said. Rosenfarb said because the cause of the sounds was unclear, the only mitigation is to limit exposure, and to move away as quickly as possible if workers begin to hear the abnormal sounds again.

Palmieri agreed to another hearing on the issue Tuesday, but asked that future hearings be classified. All of the department’s investigations are “ongoing,” he said.

Left: More than a year after U.S. government workers in Cuba reported hearing a series of strange sounds that made them ill, investigators still aren't sure what caused the “sonic attacks,” or who is responsible, State Department officials told a Senate hearing on Tuesday. REUTERS/Alexandre Meneghini.