The reason more young voters aren’t connecting with Clinton is obvious, and we’re missing it

When Hillary Clinton mounted her first presidential campaign 12 years later, Egan was in the sixth grade, and too preoccupied by school, friends and student council to pay attention to national politics.

Older Democrats still revere the Clintons. The couple’s energy, charisma and unusual political partnership has captivated supporters and critics alike since Bill Clinton was elected president a quarter-century ago.

But for Egan, a Manchester native who is supporting Vermont Senator Bernie Sanders in tonight’s primary, and part of the newest generation of Democratic voters, the lion’s share of the Clintons’ many triumphs and failures took place in the distant past. That includes the Arkansas years, the health care and impeachment battles of the 1990s, even Hillary Clinton’s more recent post-White House career, including her presidential run in 2008.

“Hillary is like our parents’ Bernie,” Egan said, talking loudly over the indie rock group Edward Sharpe and the Magnetic Zeroes yesterday at a concert-cum-rally for Sanders. She views Clinton, who is 68, as the liberal champion of an earlier era.

READ MORE: 5 things to know about the New Hampshire primary

Egan was waiting with two friends for Sanders, who is 74, to take the stage, as the band played before a packed arena at the University of New Hampshire in Durham. She added that her decision to back Sanders has nothing to do with gender.

“I’m a feminist. I want a woman in the White House, but I don’t think we should elect Hillary just because she’s a woman,” Egan said.

One of her friends, Lauren Cavanaugh, jumped in. “I feel like Clinton lies a lot,” said Cavanaugh, an 18-year-old college freshman who grew up in the city of Nashua, N.H. “She changes her views for every group she speaks to. I can’t trust her.”

Both women said they started following Clinton when she began running for president last year; Clinton had already completed her Senate career and tenure as secretary of state by the time they graduated high school.

“People who are 18 or 20 didn’t live through the Clinton era. To them, Hillary is just another public figure,” said Hank Sheinkopf, a Democratic strategist who worked on Bill Clinton’s 1996 presidential campaign. “There is a generational shift going on.”

Watch the PBS NewsHour Democratic Primary Debate, 9 p.m. EST Feb. 11, on your local PBS station, and in our live stream, which will begin at 8:30 p.m.

The Iowa caucuses seemed to offer up concrete proof that times are changing.

Sanders beat Clinton 84 to 14 percent among Democratic caucus goers age 18 to 29, fueling the perception that young voters are at the forefront of a progressive movement to nominate the first far-left presidential candidate since George McGovern won the party’s nomination in 1972.

Clinton, who narrowly beat Sanders in Iowa, becoming the first female candidate in history to win the caucuses, admitted at a town hall-style debate two days later that the overwhelming support for Sanders among young voters was “amazing.”

“I accept the fact that I have work to do to convey what I stand for, what I’ve accomplished [and] what I want to do for young people,” Clinton said, before adding, “They don’t have to be for me. I’m going to be for them.”

That said, there are plenty of young people who support Clinton’s campaign who don’t remember the 1990s, or her time as a senator. 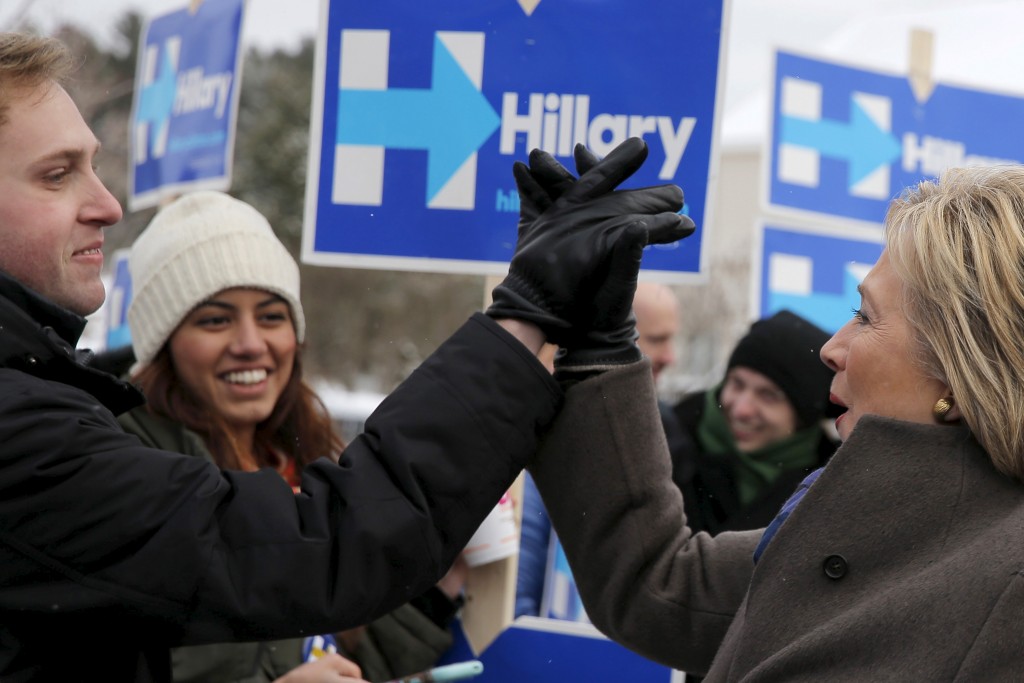 Hillary Clinton high-fives a supporter outside a polling place in Derry, New Hampshire on February 9, 2016, the day of New Hampshire’s first-in-the-nation primary. Photo by Brian Snyder/Reuters

“If we had grown up with her like our parents did, [this election] might be” different, Clare Kernie, 17, said after seeing Clinton speak at an event in Manchester yesterday. “But I still think we can appreciate the moment.”

In the past week, as the primary race has shifted to New Hampshire, Clinton supporters have argued that the media-driven narrative of a surging youth vote for Sanders is both overblown and a self-fulfilling prophecy that has motivated more young people to turn out for Sanders.

“There is an age gap” between Clinton and Sanders’ supporters, said Mike Stratton, a former political consultant to Bill Clinton who has raised money for Hillary Clinton’s 2016 campaign.

“But it’s more reflective of society in general,” rather than a genuine split within the Democratic Party along ideological lines, or an accurate reflection of Clinton and Sanders’ personal appeal, Stratton said. For most voters, especially younger ones, Stratton said, “it’s not a matter of what you did for me yesterday. It’s, what are you doing for me today?”

“People who are 18 or 20 didn’t live through the Clinton era. To them, Hillary is just another public figure. There is a generational shift going on.”

Clinton has adopted a patient approach with young voters. In her stump speech, Clinton notes that she shares Sanders’ commitment to reducing income inequality and making college and healthcare more affordable, before launching into a fluid, point-by-point argument about why her plans are more realistic.

If Clinton is frustrated by the fact that so many young voters identify with Sanders, despite her lifetime of work on progressive issues, she does not let it show.

The same cannot be said for her husband, who has escalated his attacks against Sanders in recent days. At a campaign stop on Sunday, Bill Clinton rebuked Sanders supporters for using sexist rhetoric in criticizing his wife online.

The former president made a direct plea to younger voters yesterday, saying their lives would be “way better” off under Hillary Clinton’s policies than if Sanders tried to enact a series of expensive proposals like free college tuition that stand little chance of passing through Congress.

“Follow the adage your momma taught you,” Clinton told a small crowd of supporters gathered at The Governor’s Inn in the town of Rochester. “If it’s too good to be true, it may be.”

In a brief interview as he worked the rope line after his speech, Clinton said he wasn’t surprised that young voters at this stage of the primary race find Sanders appealing. But he cautioned that public opinion might shift as the nomination process continues.

“I think they’re trying to figure out what the differences are” between the two candidates, Clinton said. “This is just the beginning of the skirmish.”

“We gotta have a debate,” he added.

The debate isn’t new, as both Clintons know. In the modern presidential era, young voters have consistently backed candidates who claim to represent the outsider, anti-establishment wing of their party, regardless of the candidates’ age. (If elected, Sanders would be the oldest president in history).

In the 1968 Democratic primaries, young voters flocked to Eugene McCarthy — an older, white, relatively unknown U.S. senator from Minnesota who built his entire campaign around his opposition to the Vietnam War and support for civil rights. Four years later, the same group supported McGovern, only to see him get crushed by Richard Nixon in the general election.

“Whether it’s accurate or not, the contrast with Clinton is about authenticity versus ambition. And young people are always attracted to authenticity.”

Rick Ridder, a Democratic strategist who went on to serve as an adviser on Bill Clinton’s 1992 campaign, recalled volunteering for McGovern as a 19-year-old. At the time, he said, McGovern seemed like the end-all-be-all of liberal politics.

“I had no concept” of history, Ridder said. “Adlai Stevenson [the Democratic Party’s nominee in 1952 and 1956], was ancient news. That guy’s picture was in black and white.”

More recently, candidates like President Obama on the left and Ron Paul on the right attracted large followings of young voters who wanted a shakeup in Washington, D.C.

For young Sanders supporters in 2016, “whether it’s accurate or not, the contrast with Clinton is about authenticity versus ambition. And young people are always attracted to authenticity,” said Dennis Goldford, a political science professor at Drake University in Iowa. “It doesn’t matter if it’s true. In politics, appearance is reality.” 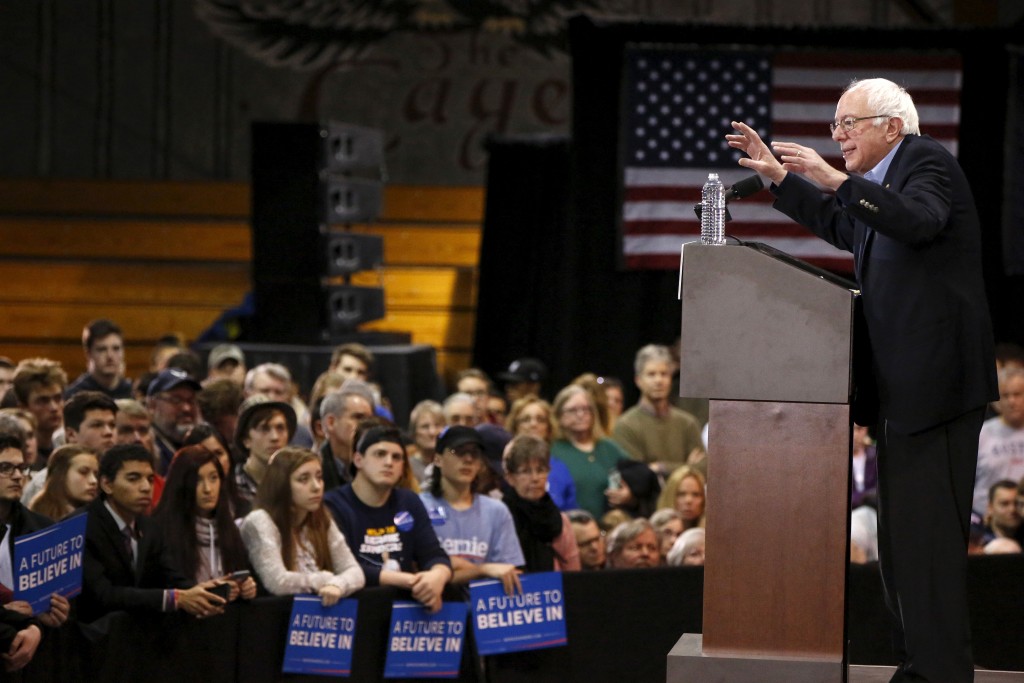 At the concert-rally for Sanders last night, Alex Ebert, the lead singer of Edward Sharpe and the Magnetic Zeroes, paused between songs to ask members of the audience why they were there.

“I’m here for campaign finance reform!” one student shouted. “I drove through a snowstorm with my best friend for this reason, and I couldn’t be happier!” another student yelled, drawing cheers from the crowd, though it was unclear if “this reason” was a reference to Ebert’s band or Sanders.

Egan and Cavanaugh looked on, eager to hear the senator speak. “I’ve never been to a Bernie event. It has a lot of good energy. Good vibes,” Cavanaugh said.

Egan agreed. She wanted to see Sanders in person, even if it meant disrupting her regular Monday night routine. “I have some homework, but I’m happy to be here,” Egan said. “I’m ready to stay up until whenever.”

Correction: An earlier version of this post incorrectly stated Eugene McCarthy’s home state. He was from Minnesota.