The view from inside Florida’s biggest swing county

ST. PETERSBURG, Fla. — With just one week left in the midterm elections, Democrats and Republicans are scrambling to drive up turnout in tight U.S. Senate and governor’s races in Florida, with one swing county on the state’s west coast emerging as a key battleground.

Pinellas County, a region of beach towns and suburbs near Tampa with a largely white, older electorate, was one of just four Florida counties (out of 67) that voted for Barack Obama in 2012 and Donald Trump in 2016.

The county remains just as unpredictable today as it was two years ago, said Susan McGrath, the chair of the county’s Democratic Party. “Pinellas is the swing county in the swing state,” McGrath said.

And as the largest of Florida’s four counties that flipped from blue to red, Pinellas County in 2018 could once again signal how the rest of the state will vote, said Steve Schale, a veteran Florida Democratic strategist. “The candidate that wins Pinellas is probably the candidate that wins Florida,” he said.

The competitive U.S. Senate contest and governor’s race have put Florida in the national spotlight in the final week of the election. Trump will hold two rallies in the state in the coming days, and Obama is scheduled to make an appearance here this week as well.

Neither Trump or Obama are slated to visit Pinellas County. But Democratic and Republican candidates have been scrambling to shore up support in the region and other key parts of the state ahead of Election Day.

In the 2014 midterms, 57 percent of registered voters in Pinellas County voted, according to county election data, significantly higher than the national turnout of 36 percent. Democratic and Republican officials said they expected this year’s turnout in Pinellas County to surpass the last midterm cycle, driven largely by enthusiasm surrounding the governor’s race. 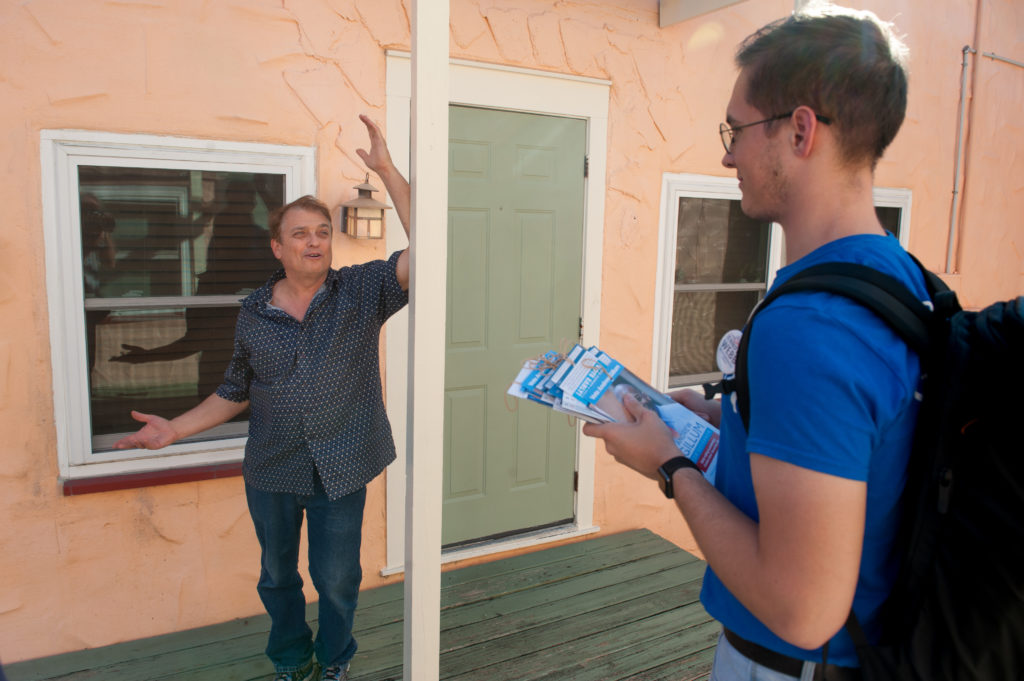 “Have you voted?” a field organizer asked. “I’m going to,” Raymond Solomon, answered, prompting the Gillum campaign volunteer to respond: “You promise?” Photo by Jay Nolan for PBS NewsHour

Democrat Andrew Gillum has led Republican Ron DeSantis by an average of 3.5 points in polls taken over the past two weeks, according to RealClearPolitics. Gillum is the mayor of Tallahassee; DeSantis, whom Trump endorsed in the GOP primary, represented Florida in Congress before stepping down last month to concentrate on his race for governor.

The Senate election is even closer. Democratic Sen. Bill Nelson has an average lead in recent weeks of 2.6 points over outgoing Republican Gov. Rick Scott, who is term limited from running for governor again. Scott, a wealthy former health care executive, has been an outspoken conservative governor since winning election as part of the Tea Party wave in 2010.

There were 661,843 people registered to vote in Pinellas County through the end of September, according to official statistics. Registered Democrats held a small lead — 2,258 — over Republicans. But roughly 25 percent of the county’s voters are also independent, a group both sides are hoping to win over.

DeSantis and Gillum have both made visits to the area, and their teams are still canvassing neighborhoods, part of a blitz that includes mailers and a flood of campaign ads on the radio and television.

Both racesoffer stark choices for voters. Gillum has joined other progressive Democrats in calling for a Medicare for all program, and has said he would abolish the U.S. Immigration and Customs Enforcement agency in its “current form,” another popular stance on the left. DeSantis is a staunch Trump supporter and critic of illegal immigration. Nelson and Scott also hold opposing views on some of the leading issues of the 2018 midterms, including health care; Nelson supports the Affordable Care Act, while Scott, as governor, chose not to expand Medicaid in Florida under the law after that provision took effect in 2014. 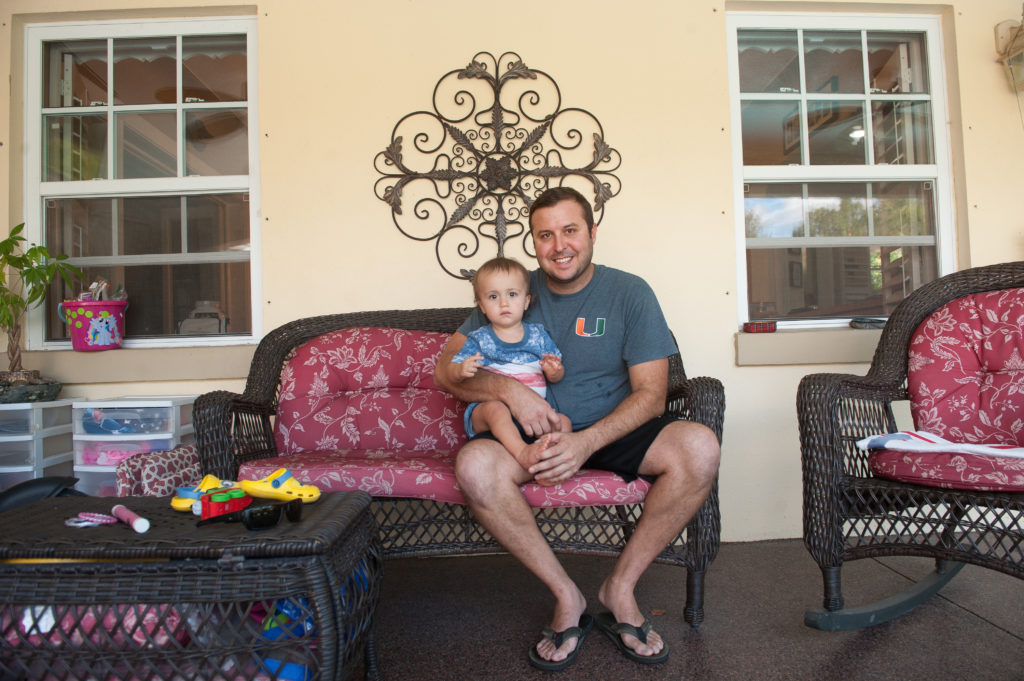 Carl Joyner, a firefighter from St. Petersburg, said he opposed Gillum’s policies. He also cited the FBI investigation into corruption in Tallahassee under Gillum’s watch as mayor, something DeSantis has used to attack Gillum throughout the election. When Trump backed DeSantis in the GOP primaries, that “basically sealed the deal,” Joyner said.

Other Republicans, including Steve Dante, a retired salesman who moved to Pinellas County from New Jersey, agreed that the midterms represented a referendum on Trump’s economic policies. The country is doing better with Trump in office, Dante said, adding that the president did not get as much credit as he deserved. “He’s not getting a very fair shake in the media,” Dante said. 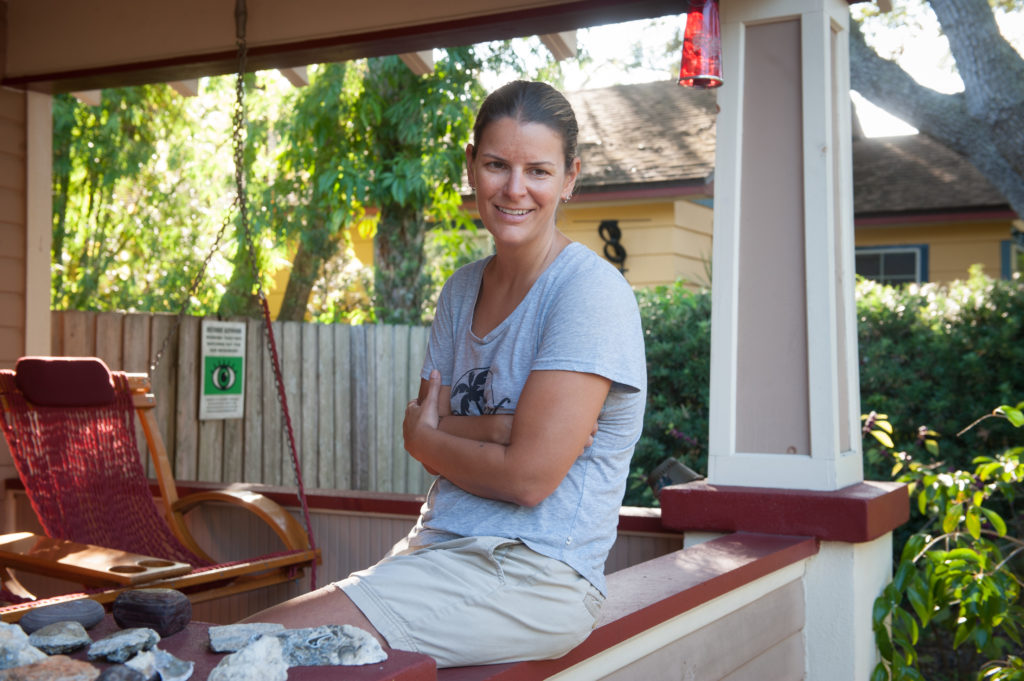 “I would love the midterms to shift power to the Democrats. Anything to turn the tide of how things are going right now,” said Kate Ciembronowicz, an independent voter who backed Gillum over DeSantis. Photo by Jay Nolan for PBS NewsHour

On Monday afternoon, some Democrats who live in the leafy, tree-lined Historic Kenwood section of St. Petersburg, and who answered their doors to speak with a Gillum campaign field organizer, insisted their opposition to DeSantis and Scott had nothing to do with the president. “This is not about Trump,” Raymond Solomon, a retired IT worker, told the PBS NewsHour afterwards, before reeling off a list of policy differences on climate change, the environment and other issues.

Solomon, 65, had answered his door by insisting he would back Gillum.

“Have you voted?” the field organizer had asked. “I’m going to,” Solomon answered, prompting the Gillum campaign volunteer to respond: “You promise? When is that going to be?”

But other left-leaning voters did not seem to need motivation. They said they wanted to send Trump and Republicans a message. “I would love the midterms to shift power to the Democrats. Anything to turn the tide of how things are going right now,” said Kate Ciembronowicz, an independent voter who backed Gillum over DeSantis.

With early voting already underway across the state, the campaigns are running out of time to change voters’ minds. The Miami Herald reported Sunday that Republicans in Florida had an initial lead in early voting turnout, 42 to 40 percent, but that Democrats had pulled ahead among voters turning in ballots ahead of Nov. 6.

A spokesman for the DeSantis campaign declined to comment on strategy in the final days of the election. Geoff Burgan, the Gillum campaign spokesman, said the campaign was “highly engaged” in Pinellas County. “It’s an area where we can and are competing,” Burgan said. 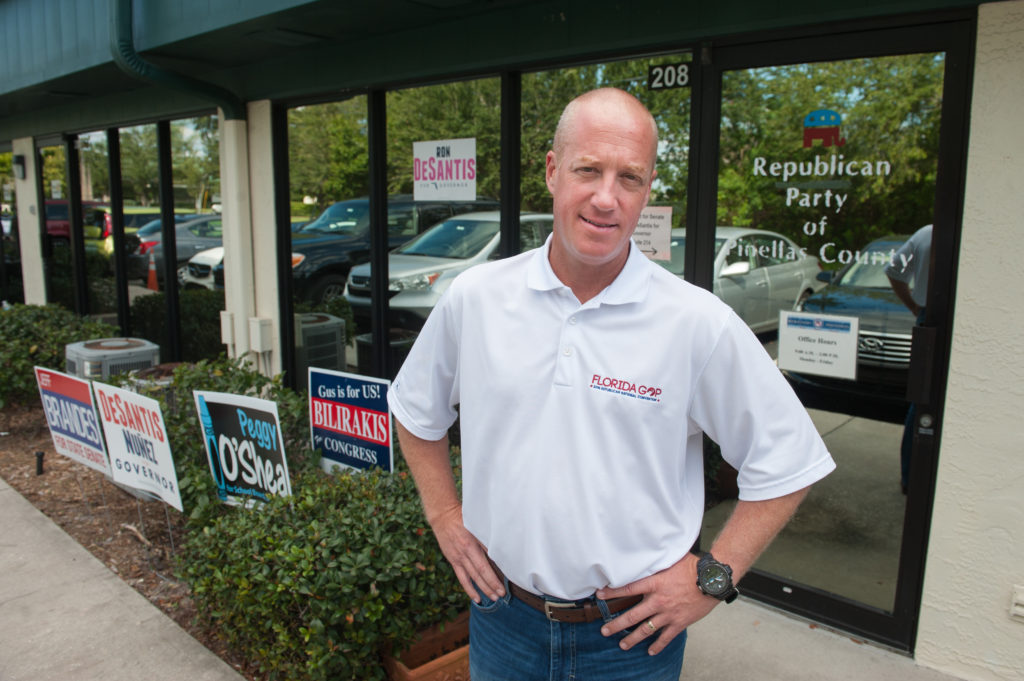 Nick DeCeglie, chairman of the Pinellas County Republican Party, said he’s seeing the same energy among GOP voters in the midterm as he saw in 2016 when Trump won the county. Photo by Jay Nolan for PBS NewsHour

Nick DeCeglie, the chairman of the Pinellas County Republican Party, said Republican voters in the state were unusually energized for a midterm election. He compared it to the enthusiasm on the right in 2016, when Trump upended predictions by winning Florida.

“We had people coming into our headquarters and Donald Trump’s headquarters in Pinellas County every day, all day [in 2016]. You could feel it on the ground,” said DeCeglie, who is running for a seat in the state legislature. “We’re seeing very similar energy in 2018.”