LONDON — U.S. Secretary of State Rex Tillerson said Monday that he sees progress in getting European support for tough new penalties against Iran that could prevent a U.S. withdrawal from the Iran nuclear deal.

After meeting with British Prime Minister Theresa May, national security adviser Mark Sedwill and Foreign Secretary Boris Johnson, Tillerson said they had agreed to set up a working group of experts on fixing flaws in the landmark 2015 agreement that President Donald Trump has warned he will walk away from this spring unless fixes are made to his liking.

“I think there’s a common view among the E3 that there are some areas of the (nuclear deal) or some areas of Iran’s behavior that should be addressed,” Tillerson told reporters after talks with Johnson. The E3 are Britain, France and Germany, which are all parties to the deal.

Tillerson specifically highlighted concerns about Iran’s ballistic missile program, which is not covered by the nuclear deal, and provisions in the agreement that allow Iran to gradually resume advanced atomic work.

The working group will begin to meet as early as next week to discuss how to address the flaws “through some type of another side agreement perhaps or a mechanism that would address our concerns,” Tillerson said.

But, he stressed, “it is important that we do that in parallel and don’t vitiate the fundamentals of the Iran nuclear deal.”

Tillerson will be carrying a similar message to Paris, his next stop in Europe on Tuesday. 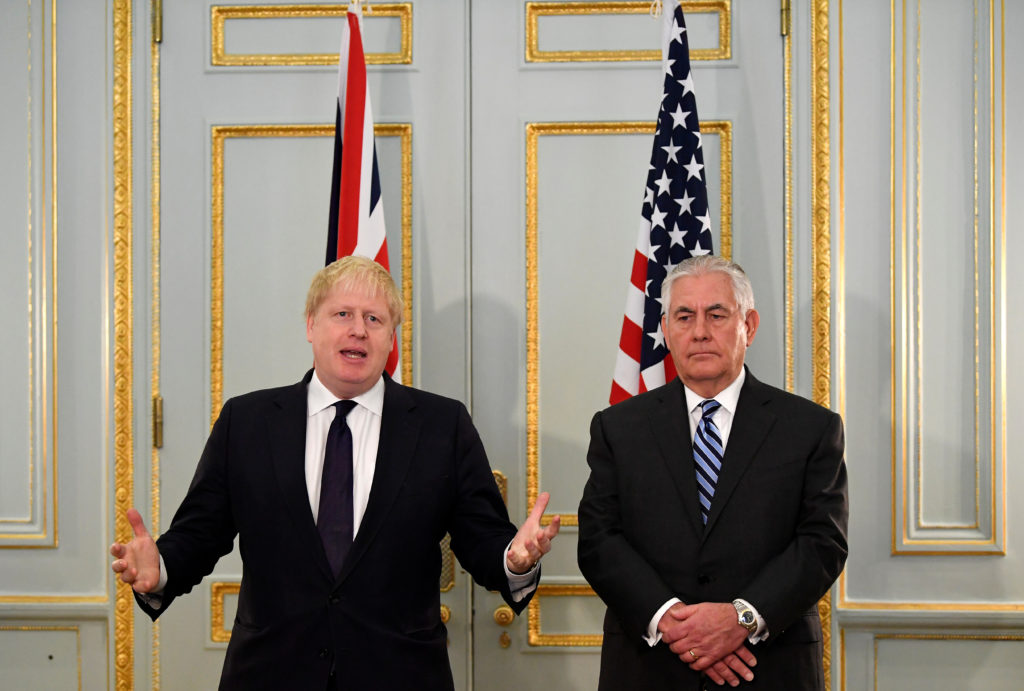 The nuclear deal gave Iran billions in sanctions relief in return for curbs on its atomic program.

But earlier this month, Trump vowed to stop waiving U.S. sanctions unless the Europeans agreed to strengthen its terms by consenting to a side deal that would effectively eliminate provisions that allow Iran to gradually resume some advanced atomic work. Trump also wants tighter restrictions on Iran’s ballistic missile program.

Iran has rejected any renegotiation. Britain, France and Germany have expressed some willingness to work with the U.S. to prevent the deal from collapsing.

Earlier Monday, Tillerson became the highest-ranking U.S. official to visit the new American embassy in London, a building that Trump has derided for its cost and location.

Opening his nearly weeklong trip to Europe amid the government shutdown back home, Tillerson greeted U.S. ambassador to Britain Robert Wood Johnson but was forced to cancel a planned meeting with embassy staffers because o.

The new embassy became a point of strain in U.S.-British relations earlier this month when Trump said he had cancelled plans to visit Britain and formally open the billion-dollar London facility in February because it cost too much and was in a less desirable location than the old embassy.

In a tweet that reverberated across the Atlantic, Trump lambasted the Obama administration for moving the embassy from London’s posh Mayfair district. His explanation was met by skepticism from many who noted Trump’s possible visit was a source of controversy in Britain with some politicians saying he was not welcome and should not come.

The decision to move the embassy was made by President George W. Bush’s administration in 2008 after it determined the old facility in Grosvenor Square had uncorrectable security issues. The new embassy was constructed with the proceeds from sales of U.S. government properties and leases in London. The new embassy, in the former industrial area of Nine Elms on the south side of the River Thames, opened its doors on Jan. 16.

Left: U.S. Secretary of State Rex Tillerson talks to the media before his meeting with Jordanian Foreign Minister Ayman Safadi at the State Department in Washington, D.C. Photo by Yuri Gripas/Reuters