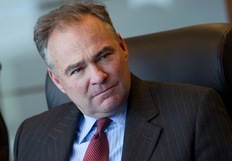 Former Democratic National Committee Chairman Tim Kaine inched toward an endorsement of gay marriage Tuesday and said his party should take a stance on the issue.

The Democratic Senate candidate and former Virginia governor told reporters he believes that gay couples deserve the same “legal rights and responsibilities” as straight couples. He also said he hopes the party would “affirm that principle” and establish a platform on the issue, Kaine said at a breakfast hosted by the Democratic think tank Third Way.

The topic of gay marriage has commanded Democrats’ focus this week, since Vice President Joe Biden remarked on “Meet the Press” on Sunday that he supported marriage for gay couples. The White House said in response that his comments were consistent with the president’s views on equality. Spokesman Jay Carney stopped short of giving President Obama’s full view on gay marriage, and instead said his stance has been “evolving.” The issue again makes the news on Tuesday when residents of North Carolina vote on a constitutional amendment banning gay marriage and civil unions.

Brian Brown of the National Organization for Marriage and gay rights advocate Richard Socarides debated the matter on Monday’s NewsHour:

President Obama and the Democratic Party have not taken a unified stand on same-sex marriage, despite party leaders including Nancy Pelosi urging support for marriage equality be part of the convention platform. Last week, 11 state party chairmen endorsed that idea as well.

When asked by reporters if the media would be wrong to say he is for gay marriage, Kaine responded, “Just say I’m for relationship equality.”

“The labels get in the way of the issue,” Kaine said.

Kaine faces George Allen, former Virginia governor and U.S senator, in one of the nation’s most-watched Senate battles. (In fact, it’s one of the NewsHour Senate Six races we’ll be watching.)

Kaine and Allen have been deadlocked in the race for the past year. On Tuesday, a new Washington Post poll measured each with 46 percent support among Virginia voters.

At the breakfast, Kaine acknowledged that Virginia remains a top swing state for the presidency. Enthusiasm for the president would prompt voters to cast ballots in November and could help his ticket, Kaine said.

“People know me very well and they know George Allen very well,” he said. “The presidential race will have the center of gravity.”