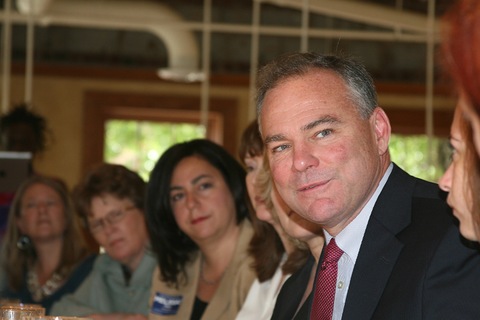 ALEXANDRIA, Va. | Just days after a new poll showed Virginia’s U.S. Senate race in a near dead heat, Democrat Tim Kaine was on the campaign trail, talking about his plan to strengthen the economy.

On Friday afternoon, Kaine met with about 20 women at a bakery in Alexandria to talk about his economic strategy. Seated at the middle of the table, Kaine listened as each woman introduced herself before offering his ideas.

“I think that Virginia has a lot of lessons for the national economy,” Kaine said, listing three strategies from the commonwealth’s playbook that he hopes to apply on the national level: growth, talent strategy and balancing issues.

Citing his experience serving as governor for four years, he said he learned a very important economic lesson: You can’t cut your way to prosperity. “If you are only cutting, you are making a big mistake,” Kaine said, “The all cut approach is a weakening approach, not a strengthening approach. So, what you have to do is find the balance of cuts, but also investment.”

After his comments, Kaine fielded questions about government regulations, immigration and decreasing the cost of education. Offering up his email address, Kaine encouraged the women to send him suggestions.

The NewsHour spoke with him briefly after the event.

In addition to hosting a competitive Senate race, Virginia is a key battleground state for the presidential election. In 2008, President Obama beat John McCain in the state — the first time Virginia had backed a Democrat since Lyndon Johnson in 1964.

Virginia’s 13 electoral votes could make all the difference in November. The NewsHour spoke with a Democrat at the event about the state’s importance in the presidential election. Watch that conversation below: 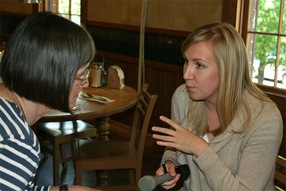 In the next few weeks the NewsHour will catch up with Allen, poised to formally cement the GOP nomination in Tuesday’s primary. Stay tuned.

Virginia’s Senate race is one of the NewsHour Senate Six races to watch. We’ll also be tracking how Virginia Gov. Bob McDonnell is doing in our “Divided by D.C.” series examining his record compared with Maryland Gov. Martin O’Malley.