5 takeaways from the Democratic debate

Despite three hours of talk, some moving moments and heated disagreements, the third Democratic presidential primary debate did little to change the dynamics of the race or provide much daylight between the top three candidates.

Former Vice President Joe Biden and Senators Bernie Sanders of Vermont and Elizabeth Warren of Massachusetts mostly avoided attacking each other, taking some of the fizz out of what had been billed as the first major showdown of the primary season. Yet it was a substantive debate on the issues, and there were some fireworks between Biden and second-tier candidates, notably former Obama cabinet official Julian Castro.

Here are key early takeaways on who made gains and who missed out in the third Democratic debate.

Voters hoping for a glimpse of what Biden, Sanders and Warren really think of each other likely came away disappointed. So far, none of the top three candidates are showing their cards. It’s still relatively early in the primary cycle; there is plenty of time for the top-polling candidates to go after each other in earnest, either in future debates or on the campaign trail. But if Thursday was any indication, Biden, Warren and Sanders seem content to avoid in-person attacks as long as they can.

There were moments when they took swipes at each other. Biden went after Warren and Sanders on health care, and Sanders criticized Biden’s record on trade and his Iraq War vote. But the attacks were quick and never got personal, and the tone remained civil overall. There were no major confrontations, despite the fact that this debate was the first to feature all three candidates on the same stage.

Interestingly, of the three, Warren seemed the least interested in engaging her top rivals. Unlike Sanders, she avoided criticizing Biden. The strategy could help her for now. Other, lower-polling candidates on stage who went after Biden, most notably Castro, received immediate blowback on social media. In contrast, Warren appeared above the fray.

Three debates in, Biden has still not found his rhythm

Biden has had decades of experience in political debates, including a pair of vice presidential debates in 2008 and 2012. Biden performed fairly well in both of those appearances (though he did draw some criticism for overzealously mocking his opponent Paul Ryan’s plans in the 2012 debate). But that Biden has not shown up in the Democratic primary debates this year, including on Thursday.

Biden was energetic from the start and had a few strong moments. But those were undermined by his tendency to give long, rambling answers. He also notably sidestepped questions on his record on immigration, race relations and other issues.

Yet, his lead in national polls has held. It may be that voters are willing to accept that Biden is not at his best sharing a debate stage with so many other candidates. But as the field narrows, it may be harder for Biden to get a pass. 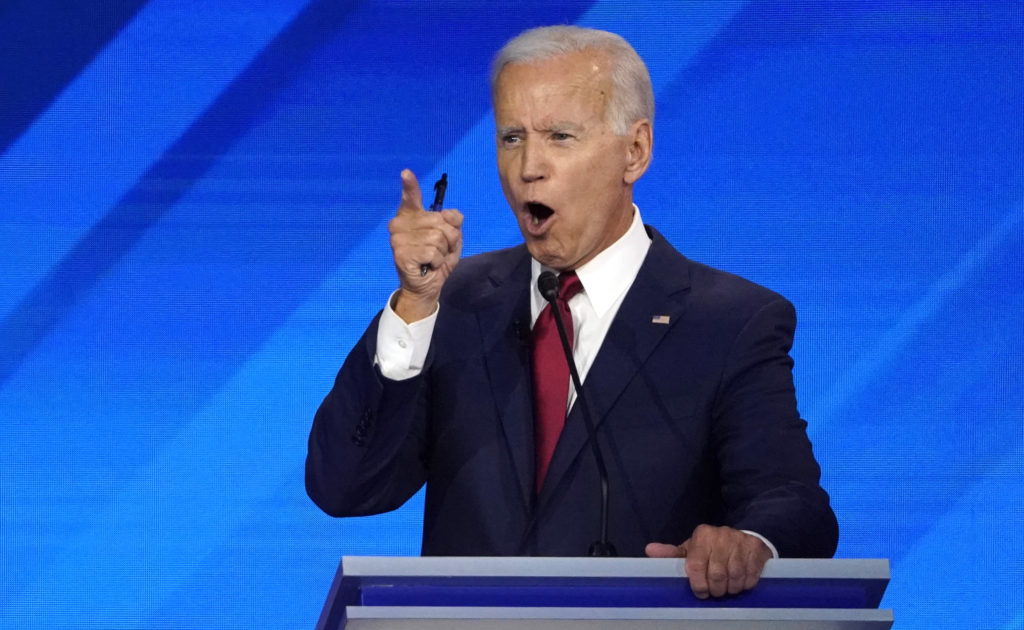 Arguably Biden’s strongest moment came early, as he defended his moderate position on health care in the face of attacks from progressive rivals who support a Medicare for All plan. Biden doubled down on his support for the Affordable Care Act, as he did in the previous two debates. But for the first time he also went after Sanders and Warren on the issue, questioning how they planned to pay for their plans to provide health care to every American.

“Nobody’s yet said how much it’s going to cost the taxpayers,” Biden said at one point, after both Sanders and Warren dodged questions about whether their plans would raise taxes on the middle class.

Biden’s attack landed, and underscored his broader political strategy on the issue. But it’s a gamble. Running as an opponent of Sanders’ Medicare for All plan may be unpopular with the Democratic Party’s progressive wing in the primaries, and his centrism could cause him to lose the nomination.

But of all the candidates on the debate stage Thursday, Biden’s health care plan, which would not abolish private insurance or require people to be enrolled in Medicare, is likely the most palatable to voters in a general election. He showed again that he is running as the Democratic frontrunner, with an eye toward a matchup with President Donald Trump.

One debate can’t change the field

With the sole exception of Sen. Kamala Harris of California, who experienced a brief bump in the polls after the first debate, the debates so far have not moved voters’ opinions of the crowded primary field. Nobody besides Biden, Warren and Sanders has cracked the top three in polls. And Harris and South Bend Mayor Pete Buttigieg are the only other candidates to consistently poll above 5 percent.

The dynamic has stymied second-tier candidates like Sen. Cory Booker of New Jersey and former Texas congressman Beto O’Rourke. Booker spoke eloquently about healing the nation’s divisions, was fluent on a wide range of issues, and has appeared increasingly comfortable in the debate format. But his success on stage with other rivals hasn’t translated to growth in national polls, and it’s unlikely Thursday will change that.

The same goes for O’Rourke, who rebounded from two subpar debate performances with a stronger showing Thursday. O’Rourke drew large applause for his plan to ban and buy back assault weapons, especially for the line, “Hell yes, we’re going to take your AR-15, your AK-47.” O’Rourke has pushed the issue after the mass shooting last month in his home city of El Paso, Texas.

But O’Rourke, like Booker and Buttigieg, who also had some memorable moments Thursday, has struggled to make a breakthrough among such a crowded primary field. It may be that, in voters minds, there’s just not enough room at the very top for more than a small handful of candidates.

Democrats don’t have a cohesive message on immigration

Univision anchor Jorge Ramos started the immigration portion of the debate by asking Biden if he believed the Obama administration had made a mistake in deporting hundreds of thousands of immigrants. Then he was even more blunt: “Why should Latinos trust you?”

Biden, who had dodged the question on deportations, did not have a good answer. Ramos then asked Castro why voters should trust Democrats at all on the issue, after years of promising to pass comprehensive immigration reform without any results. Castro pivoted to an attack on Trump. “Donald Trump has a dark heart when it comes to immigrants,” Castro said. The rest of the Democrats on stage took the same tack. Warren and others took turns criticizing the Trump administration’s approach to immigration, highlighting policies that separated families at the border and made it harder to apply for asylum in the United States.

Yet none offered a simple, easy to understand plan with concrete policies that could plausibly be passed in Congress. Democrats are relying on Latino voters in the primaries, and the nominee will need high Latino turnout to win the general election. But for a party ostensibly focused on immigration reform, the 2020 candidates showed little new thinking on how to solve one of the country’s most intractable political problems.