Commandant of the U.S. Marine Corps Robert B. Neller spoke from the Pentagon on Friday to address the recent nude photo scandal. Video by PBS NewsHour

WASHINGTON — The top Marine general said Friday that an investigation into reports that nude photos of female service members are being secretly posted online without their permission has an effect on the entire Marine Corps and must be done carefully.

“We don’t want to be in a hurry. We want to make sure we’re thorough and we’re within the law,” Gen. Robert Neller told a Pentagon news conference.

“This affects our entire organization,” the general said.

“The purported actions of civilian and military personnel on social media websites, including some associated with the Marines United group and possibly others, represent egregious violations of the fundamental values we uphold at the Department of Defense,” Mattis said in a written statement.

Former and current female Marines have said their photographs were shared on social media without their consent. The Naval Criminal Investigative Service launched an investigation into the matter and is urging victims of the photo-sharing to come forward.

NCIS says it has received numerous tips. The other services are looking into the matter, but say they aren’t aware of other victims. 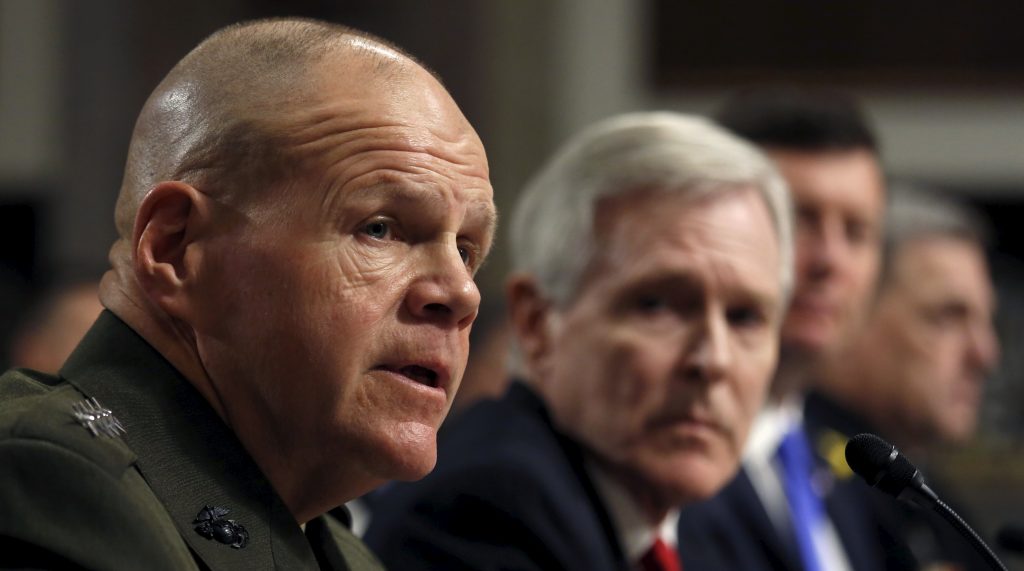 Commandant of the U.S. Marine Corps Gen. Robert Neller (L) testifies during a Senate Armed Services Committee hearing on the implementation of the decision to open all ground combat units to women in 2016. Photo by Kevin Lamarque/Reuters

Active-duty Marine Marisa Woytek and former Marine Erika Butner appeared at a news conference in Los Angeles on Wednesday to applaud the investigation.

Butner, 23, who served for four years before leaving the Marines in 2016, said she contacted investigators in January and told them there was an online storage drive that contained “indecent photos of women from all military services, organized by name, rank and even where they were stationed.”

The women’s lawyer, Gloria Allred, said there may be hundreds of such postings and that they prompted pornographic and violent replies, including some recommending that female Marines be raped or shot.

In a video message released Tuesday, Neller said Marines should be focused on preparing to fight, “not hiding on social media participating in or being aware of actions that are disrespectful and harmful to other Marines. It’s embarrassing to our Corps, to our families and to the nation.”

The nearly four-minute video, distributed on various Marine websites and social media pages, were the first expansive comments Neller made about the reports.