WASHINGTON — Despite its bumpy relationship with the Palestinians, the Trump administration is siding with the Palestine Liberation Organization in urging the Supreme Court to reject an appeal from American victims of terrorist attacks in the Middle East more than a decade ago.

The victims are asking the high court to reinstate a $654 million verdict against the PLO and Palestinian Authority in connection with attacks in Israel in 2002 and 2004 that killed 33 people and wounded hundreds more.

The case was scheduled to be considered at the justices’ private conference on Thursday. A decision to reject the appeal could come as early as Monday. If the court decides to hear the case, it could say so by the middle of this month.

READ NEXT: Four videos that explain the Israeli-Palestinian conflict

The federal appeals court in New York tossed out the verdict in 2016. It said U.S. courts can’t consider lawsuits against foreign-based groups over random attacks that were not aimed at the United States.

The victims sued under the Anti-Terrorism Act, signed into law in 1992. The law was passed to open U.S. courts to victims of international terrorism, spurred by the killing of American Leon Klinghoffer during a 1985 terrorist attack aboard the Achille Lauro cruise ship.

The victims argued that offices the Palestinians maintain in the nation’s capital to promote their cause in speeches and media appearances and to retain lobbyists were sufficient to allow the lawsuit in an American court. The appeals court disagreed.

In late June, the justices asked the administration to weigh in on the case, as they often do in cases with foreign policy implications. The Justice Department filed its brief eight months later, saying there was nothing in the appeals court ruling to “warrant this court’s intervention at this time.”

In unusually strong language for a Supreme Court filing, Theodore Olson, the lawyer for the victims, wrote, “The government is not being square with the court.” Olson said the administration was being cagey about its view of the law, even after the lower court cut back on its use by attack victims to try to hold groups financially liable.

If the appeals court decision is left in place, it would close the courthouse door to U.S. victims of “many acts of terrorism overseas in which terrorists maim and kill indiscriminately, without regard to nationality,” Olson said. He pointed to recent attacks in Belgium, Britain, France and Spain as examples. Even Klinghoffer’s relatives would have no case, unless they could prove he was killed because he was American, rather than Jewish, he said.

The administration said it is “far from clear” that so many claims would be kept out of court.

Democrats and Republicans in both houses of Congress also are calling on the court to take up the victims’ case. “The Trump administration had the opportunity to stand with American victims of terrorism by defending and restoring the law. But it failed to do so. The Supreme Court should not,” Sen. Chuck Grassley, R-Iowa, a sponsor of the law, wrote in an essay on medium.com. 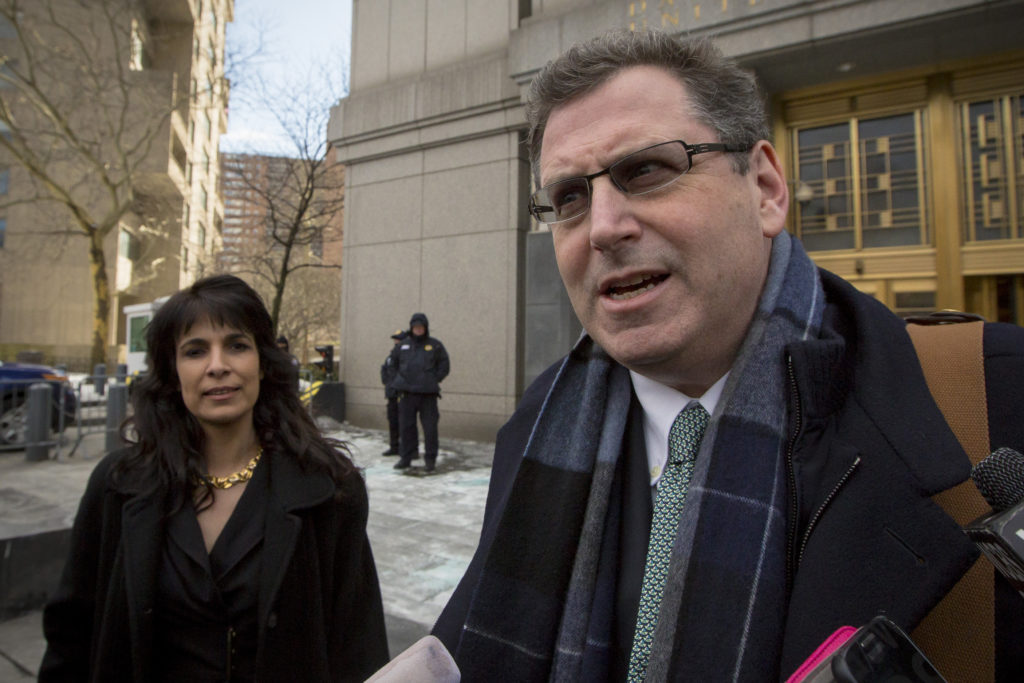 Kent Yalowitz (R) and Nitsana Darshan-Leitner, lawyers for families suing over attacks attributed to the al-Aqsa Martyrs Brigades and Hamas, speak to the media outside the Manhattan Federal Courthouse following a jury’s decision in New York February 23, 2015. A U.S. jury on Monday ordered the Palestine Liberation Organization (PLO) and the Palestinian Authority to pay more than $218 million for providing material support to terrorists, a victory for Americans suing over attacks in the Jerusalem area more than a decade ago. Photo By Brendan McDermid/Reuters

The jury award in February 2015 came during President Barack Obama’s administration. The Justice Department at that point took no position, but urged the judge to take into account the financial implications for the Palestinian Authority, which could be hurt by enforcement of the judgment against it. A U.S. official wrote in court papers that the United States has provided billions of dollars to strengthen Palestinian institutions, promote security in the West Bank, expand Palestinian economic growth and help create conditions for peace.

Since taking office, President Donald Trump has infuriated the Palestinians by recognizing Jerusalem as Israel’s capital and announcing plans to move the U.S. Embassy to Jerusalem from Tel Aviv.

The Palestinians also have called on the court to reject the appeal.

The attacks occurred in and around Jerusalem during a wave of violence known as the second, or Al-Aqsa, intifada. The jury found the PLO and Palestinian Authority liable for six attacks and awarded $218 million in damages. The award was automatically tripled under the law.