When Trump is confronted by his political rivals, the Republican front-runner’s company attorney threatens lawsuits on corporate letterhead.

The political novice’s use of corporate resources – his own and others – is just one more campaign tool. But it has drawn the attention of federal regulators, as well as campaign-law experts who say some of what he’s doing could be illegal.

“The entanglements with his business and his campaign are certainly unusual, and maybe unprecedented,” said Kenneth Gross, a lawyer who previously led the Federal Election Commission’s enforcement division. “Use of a candidate’s own corporate resources is highly, highly regulated activity.”

At the FEC’s demand, Trump’s campaign on Thursday provided regulators with the names of employees at his real estate and entertainment company who are doing work for his campaign – mostly security and communications aides.

Trump’s personal brand is fused with his business, making his campaign’s navigation of election law a particular challenge. He’s not the first candidate in this position. Former New York Mayor Michael Bloomberg and past presidential contender Steve Forbes both run companies bearing their name.

“From day one, there was no use of any corporate assets in any way, shape or form,” said Bill Dal Col, who ran Forbes’ unsuccessful 1996 and 2000 White House campaigns. “That way you don’t have to walk the maze of campaign law, and you don’t expose business or campaign to any liability.”

Bloomberg also took “enormous care” not to commingle his business and campaign, said Gross, who was his campaign attorney.

Trump is taking a different path, testing an area of election law as no other candidate has before.

Reports filed by Trump’s campaign covering its activities through Sept. 30 show hundreds of thousands of dollars in payments to cover reimbursements for campaign space at Trump’s Manhattan office tower, political use of the corporate jet and the salaries of Trump Organization employees.

Trump himself appears to be personally paying for the jet and salaries, and candidates are allowed to spend as much of their own money seeking election as they wish.

But none of the Trump Organization lawyers, including general counsel Alan Garten, is being paid through the campaign. Garten has sent angry letters when a rival candidate or group attacks Trump.

Garten warned him and the treasurer of an unrelated pro-Bush group that if the “ads contain any false, misleading, defamatory, inaccurate or otherwise tortious statements or representations concerning Mr. Trump, his business or his brand, we will not hesitate to seek immediate legal action to prevent such distribution and hold you jointly and severally liable to the fullest extent of the law for any damages resulting therefrom … and will look forward to doing it.”

Recipients of similar letters from Garten include a group backing the candidacy of Ohio Gov. John Kasich and the conservative group Club for Growth, which spent about $1 million on TV ads calling Trump “the worst kind of politician.”

Political candidates rarely respond to attacks by threatening legal action, because the law gives wide protection to speech made against political figures, a group that now includes Trump. The Trump Organization argues it has a right to protect its brand, which means protecting Trump.

“Those rights are not forfeited by virtue of Mr. Trump’s candidacy,” said Hope Hicks, a Trump campaign spokeswoman (and Trump Organization employee). The defense of his brand, she said, “is in no way any form of campaign activity and does not run afoul of federal election laws.”

Bob Biersack, who worked for the FEC for 30 years and is now a senior fellow at the Center for Responsive Politics, called such reasoning “kind of silly.” He said he had never heard of a business person invoking brand protection as a guard against public policy arguments.

Some of those who have received Trump Organization warnings have in turn slammed him for what they contend is his illegal use of corporate resources.

“Trump and his agents have explicitly directed his corporate attorneys at the Organization to do the dirty work for the campaign,” wrote Charlie Spies, the attorney for groups backing Bush, in a reply to Garten. “Just as your client is attempting to quickly learn the basics of foreign policy, we wish you personally the best in your attempts to learn election law.”

Spies has filed an FEC complaint along those lines.

Gross said Trump’s use of his own company resources, if properly documented and reimbursed at a fair market rate, could be permissible, if unusual. What’s murkier is his campaign’s use of the resources of other companies. 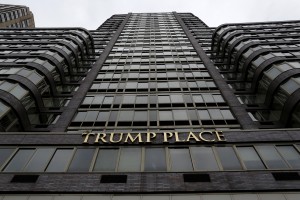 A Trump Place building, an apartment complex on the Upper West Side of Manhattan, is seen in New York. Photo By Brendan McDermid/Reuters

On Wednesday, Trump held a rally held at an airport hangar owned by International Air Response, a specialty aerial services provider run by Travis and Bill Grantham in Arizona.

“They gave us a very good deal,” Trump bragged at the event. “You know what it is? Nothing. Thank you, fellas.”

That might come as a disappointment to former Texas Gov. Rick Perry, whose campaign in June paid $40,000 to lease an aircraft from the same company to use as a dramatic backdrop as he launched his ill-fated presidential bid.

Bill Grantham said fees for the 67,000-square-foot space that Trump used run from “free to tens of thousands of dollars,” depending upon the circumstance. He declined to give more details or discuss his arrangement with the Trump campaign.

The free space for Trump appears to be an illegal corporate contribution, said Larry Noble, a former FEC commissioner and senior counsel for the Campaign Legal Center, a nonprofit that supports strong enforcement of election law.

That’s because corporations are barred from giving anything – whether it is a cash donation or a valuable gift such as an arena space – to a candidate’s official campaign.

Asked about the legality of his company’s arrangement with Trump, Grantham declined to comment. Hicks, the Trump campaign spokeswoman, responded by saying the campaign’s next financial report will be filed with the FEC in January.