Donald Trump’s presidential campaign steadily increased spending on private security after he received Secret Service protection as a candidate in 2015, and it has continued paying private security firms since Election Day, an analysis of federal records shows.

Donald J. Trump For President, INC., the president-elect’s campaign committee, spent $262,074 for “security services” for the period between Oct. 20 and Nov. 28, according to the campaign’s post-general election filing with the Federal Election Commission.

Overall, XMark, a firm that features pictures of private guards surrounding Mr. Trump on its website, received $164,121,50 from the Trump campaign between Oct. 20 and the end of November. The spending was up from the first three weeks of October, when the campaign paid the firm $29,506.

XMark is one of several private security firms on which the Trump campaign continued spending money after the president-elect was granted Secret Service protection.

Arrow Security, whose services include providing bodyguards and advanced security teams, also saw an uptick in spending from the Trump campaign in the days after the election. The firm received $2,774 from the campaign for the period covering Oct. 1-19, and $2,910 for the 20 days after Election Day, records show.

The campaign also paid Black Tie Protection Services, Inc. a total of $15,566 for the pre-general filing period in early October, and $30,338 for the month-long stretch from Oct. 20 to Nov. 28. That month, covered in the post-general report filed with the FEC on Dec. 8, is the Trump campaign’s latest campaign finance filing.

Trump was granted Secret Service protection in November 2015, after he publicly pleaded for increased protection, arguing that he didn’t have it because he was a Republican.

Before Trump received Secret Service protection, the private security guards his campaign had hired were repeatedly thrust in the spotlight.

“Before Trump received Secret Service protection, the private security guards his campaign had hired were repeatedly thrust in the spotlight.”

In August 2015, Keith Schiller, Trump’s head bodyguard, made headlines by kicking a Univision anchor out of a press conference. The next month, Schiller was caught on video punching a protester outside of Trump Tower in New York.

Schiller was back in the spotlight last week after President-elect Trump announced that the brawny former New York City police detective would serve as a deputy assistant and director of Oval Office operations. 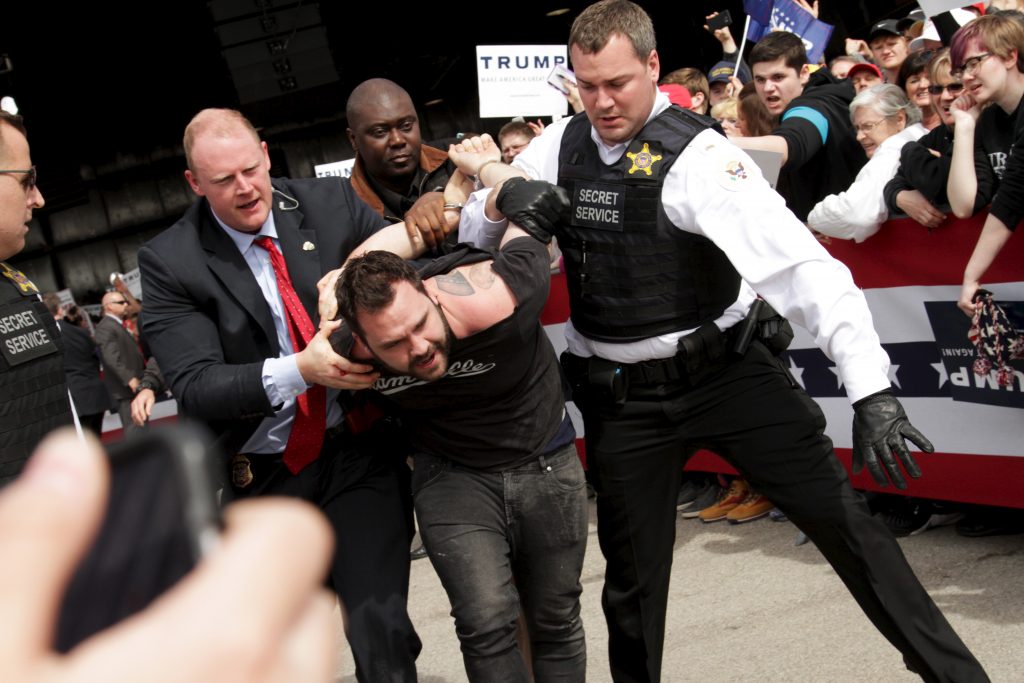 U.S. Secret Service agents detain a man at a Trump rally in Dayton, Ohio on March 12, 2016. Photo by William Philpott/REUTERS

Schiller’s appointment as a key White House aide focused attention on the relationship between private security guards and the Secret Service — and on the possibility that Trump could continue employing a private security force as president.

The arrangement would be unconventional and has stirred a debate among security experts, though there has long been an overlap between private and public security officials.

However, there are no federal standards for training private security officers. As a result, the training, enforcement, and use-of-force guidelines for private security guards are left up to the states.

Jonathan Wackrow, a former Secret Service agent under President Obama and the executive director of Risk Assistance Network + Exchange, a risk management firm, said that the business of merging private and public security is complex.

“When you go through the Secret Service academy, you’re focused on honing the trade craft of protection,” Wackrow said. “It’s a methodology which is proactive in nature, [and designed] to identify vulnerabilities in advance, and then mitigate those vulnerabilities.”

Private security “don’t have the ability to necessarily act in a comprehensive, proactive manner,” Wackrow added. “They have to rely on being more reactive, especially around executive protection.”

Trump drew criticism for using his private security force during his state-by-state “USA Thank You Tour” after winning the election, raising the possibility that he wouldn’t give up private security after entering office.

A Secret Service spokesperson said the agency is the only agency with a mandate to “provide for the protection of the president, vice-president, and their families as well as presidential candidates.”

The spokesperson added that the Secret Service “respects the First Amendment rights of individuals, and our personnel only become involved when a person makes a movement or threat toward one of our protectees.”

The official, who said that the agency is planning to announce more details on its protection plan for Trump in the near future, referred further questions to Trump transition officials.

The Trump transition team did not return several requests for comment. After the election, a Trump transition spokesperson pushed back on a POLITICO report that Trump planned to continue using private security guards as president.

But the official did not provide a detailed plan on Trump’s potential security arrangements in the White House. And the campaign finance reports show that the president-elect’s team — at least through the end of November — continued paying for private security.

“The business of merging private and public security is complex.”

If Trump continues using a combination of Secret Service protection and private security firms, several sources said it could add a layer of confusion and potential conflicts once he begins traveling around the country.

Most states follow some of the same basic guidelines for regulating private security companies. In all 42 states, including the District of Columbia, issue licenses for private security officers. But 15 of those states have no training requirements for private armed guards, though most are expected to have previous law enforcement training.

And the security regulations for private firms vary widely from state to state, meaning that if Trump continues using private guards to supplement his Secret Service protection, they could be subject to different laws regarding use of force depending on the president’s whereabouts.

In California, for example, a private employee may not use a loaded or unloaded firearm, “unless such employee possesses a firearms qualification card.”

In Texas, private security guards are allowed to have a firearm on duty as long as they wear identifiable uniforms, and carry the weapon openly, though the terms of a contract between a business enterprise and a security service can limit private security officers’ authority.

And in Virginia, a private security guard can be appointed as an “arresting officer,” which gives them more power than citizens making a citizen’s arrest but stops short of full police authority. 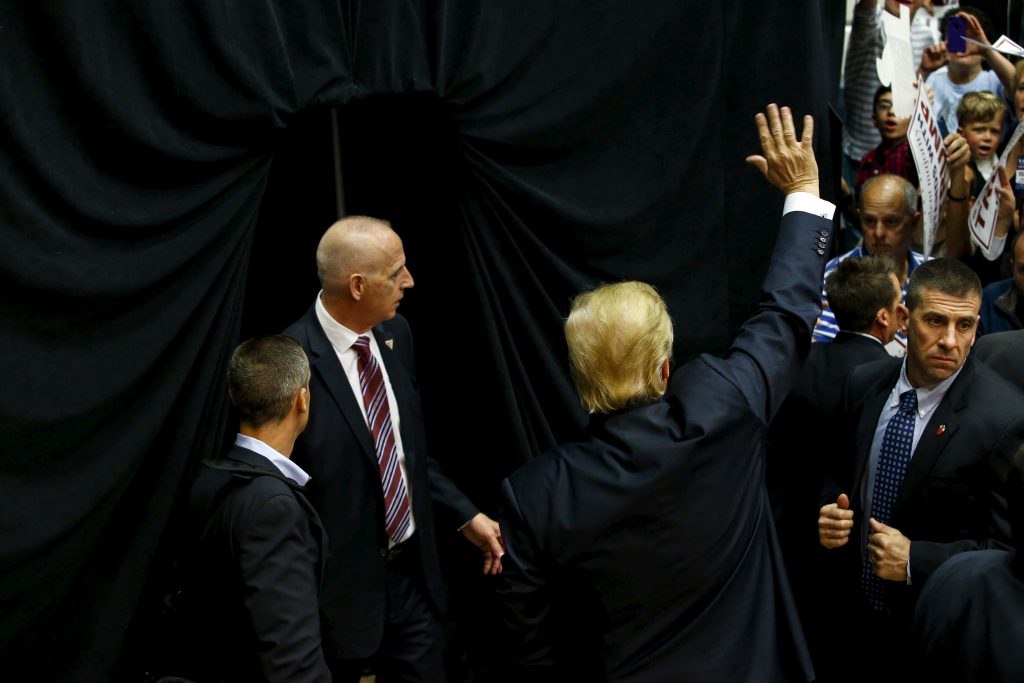 Trump waves to supporters as he is escorted by security members, including Schiller (center) after speaking at a campaign rally in Connecticut on April 23, 2016. Photo by Eduardo Munoz/REUTERS

Some experts dismissed the criticism of President-elect Trump’s private security force. Ronald Kessler, the author of the 2009 book In the President’s Secret Service, called the concerns “a little overblown.”

“Historically, presidents who stir up passions have been the ones who have been most targeted by potential assassins,” Kessler said. “Donald Trump fits that profile as someone who stirs up passion, so there is that increased risk.”

The Secret Service does have a long history of working with private security firms and local law enforcement.

In private venues, like the MetroPlex arena in Michigan that Trump visited on his post-election tour, citizens can be forced to leave by private security. Private venues hosting presidential events often hire extra security officers.

Byrne recalled working an Ohio rally in the Clinton years where the arena’s security guards wore uniforms that were nearly identical to the Secret Service’s. To tell them apart, a Secret Service “agent came out with duct tape and made private security company tape over their similar badges.”

Secret Service agents wear an identification pin when working on protective details. Private security teams working with the Secret Service typically identify themselves with other uniforms.

Still, questions about security will linger on Inauguration Day today. More than 28,000 law enforcement and security personnel are involved in the inauguration, which includes dealing with a high volume of demonstrators and Trump supporters.

Trump spoke to the security debate at a dinner event in Washington, D.C. earlier this week.

“I saw the Bikers for Trump,” he said, referring to a controversial pro-Trump group that is planning to attend the inauguration. “That’s like additional security with those guys, and they’re rough.”