The Trump campaign has a ground-game problem

As the presidential election marathon breaks into a final sprint, the Trump campaign faces a jaw-dropping gap in the ground game: Hillary Clinton currently has more than three times the number of campaign offices in critical states than does Donald Trump. Those figures include both Trump offices and Republican National Committee victory offices, as confirmed by the Trump campaign.

The contrast is a test for the conventional campaign model and points to the candidates’ stark differences in methods. Clinton is cleaving to the data-driven, on-the-ground machine that won two elections for Barack Obama. Trump, on the other hand, insists he does not need traditional campaign tactics to win the election, pointing to his overwhelming nomination victory achieved with a relatively small team and little spending.

Nevertheless, the ground game is poised to be critical in 2016. Undecided voters are becoming scarce, and targeted turnout may be the deciding factor on Nov. 8. That usually requires field offices with phone banks, organized volunteers and a coordinated effort to knock on doors and get people to the polls. 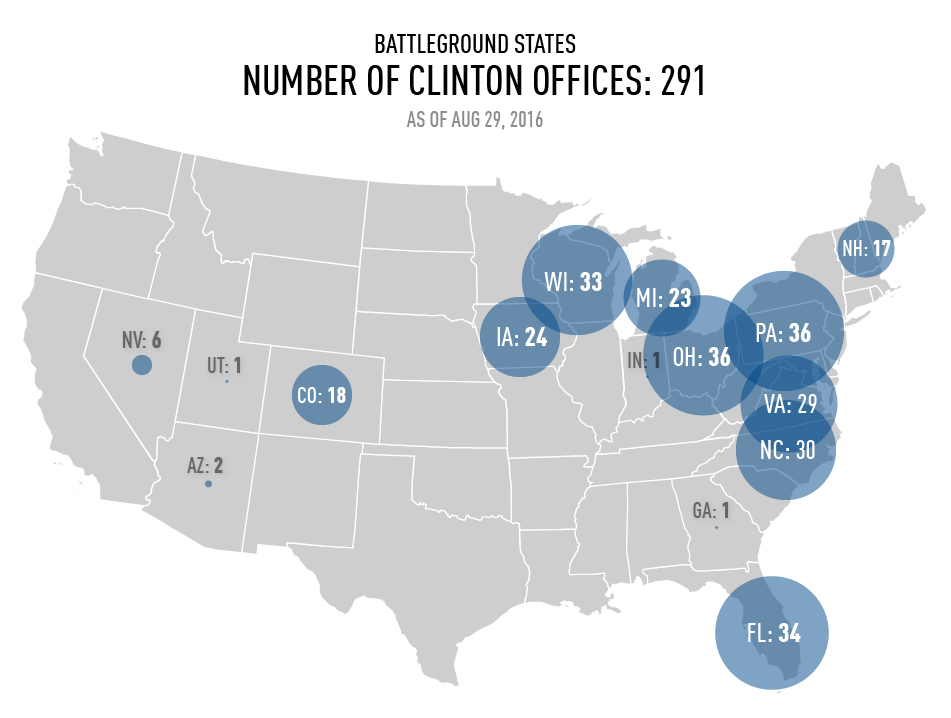 As of Aug. 30, Hillary Clinton has 291 offices in those 15 battlegrounds. Donald Trump has 88. (Those figures include joint presidential and party offices.)  Both campaigns pledge that more offices are coming. 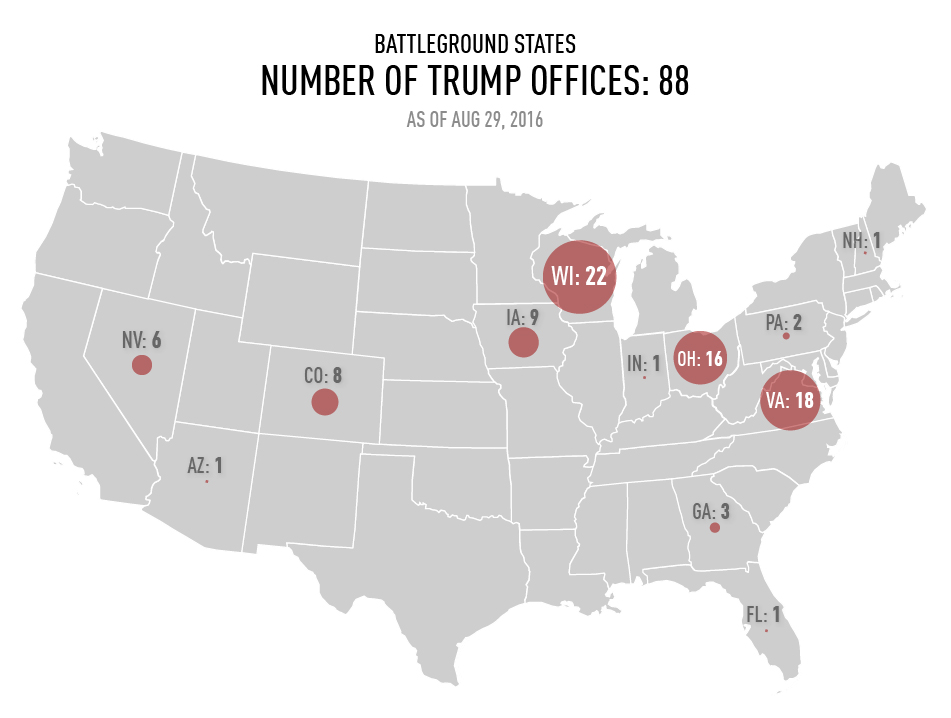 The Trump campaign says its number will more than double — adding another 132 offices — in coming days and weeks.

Lagging so far behind in infrastructure as the campaigns enter the post-Labor Day blitz is unprecedented.

But lagging so far behind in infrastructure as the campaigns enter the post-Labor Day blitz is unprecedented. To win, the Trump team hopes that their candidate can rewrite the laws of the ground game.

Donald Trump’s suite of offices in Alexandria, Virginia, is not a campaign field office, we are told when we visit.

That makes sense, given the lack of Trump posters or photos and the absence of any identifying sign outside the large glass doors. The solitary entryway campaign token is a Trump bobblehead doll, standing on the side of a long, brown and otherwise unadorned reception desk.

The sparsely-furnished space is devoted to national strategy and liaison work with Congress, an important function.

But it sits in Virginia, which was a key battleground state but lately is moving away from the Trump campaign’s grasp. It is a state where Hillary Clinton has 29 field offices open. Trump has 18, one of his largest totals at the moment, but the campaign clarified that all 18 are Republican Party offices. Trump is set to open 25 of his own Virginia offices soon, the campaign says.  But until he does, the strategy hub was the closest thing we could find to a local Trump-staffed office.

In contrast, Clinton’s nearby Alexandria office is smaller, but full of signs of on-the-ground campaign life: A giant calendar of community outreach events, a room set aside as a phone bank, and posters swirling local flavor into national mantras. One says “Hillary Ya’ll!” Another, “Virginia is Stronger Together.”

For the Trump campaign, the deeper issue may be time, not space.

No matter how many staffers get on the ground, the Trump campaign faces a question of timing in many swing counties.

That is just right now. The Trump campaign plans to open 57 Trump offices in those three states in the next few weeks, according to Susie Wiles, a communications strategist for the campaign.

But no matter how many staffers get on the ground, the Trump campaign faces a question of timing in many swing counties.

“There’s an element of time required to get operational,” said Steve Schale, Obama’s campaign manager in Florida in 2008. “Little things like getting leases signed for offices, getting cell phones for organization, getting volunteers trained, these are not turnkey operations.”

And even if Trump eventually closes the field office gap in Florida, the offices will be playing catch up compared to Clinton staffers who have been on the ground in the state for months, said Schale, who also served as a senior advisor to Obama’s Florida operation in 2012.

The Trump campaign says it is reinventing the ground game. Its critics say the campaign simply doesn’t have one.

“I haven’t seen a successful candidate with less infrastructure, particularly in a presidential campaign, than this one,” said one longtime Florida political insider who asked not to give his name to speak candidly about Trump’s operation.

In response, Trump’s chief strategist in Florida points to an unconventional tactic just launched in the Sunshine State: three campaign RV’s on the road.

The mobile offices, a way to stretch resources and miles, launched in the past week. Two were scheduled to move out Tuesday.

Trump “wants to go after every voter,” said Karen Giorno, the chief strategist for Trump in Florida. “Politicians take voters for granted, and the idea [of campaign offices] is the old guard, which Hillary represents. That the voter comes to them. We are not the old guard, Mr. Trump wants to go to the voters.”

Giorno said one of the RV’s will focus on voters in the central I-4 corridor, between Tampa and Daytona. Another will tour farther north, from Pensacola to Jacksonville, along the I-10.  And the third will rove everywhere else as needed.

The Trump campaign says it is reinventing the ground game. Its critics say the campaign does not have a ground game.

Moreover, Giorno stresses, the campaign is focusing on an unquestionably important ground game component that does not require offices: registering voters.

“We are not unaware of the fact that the ground game is important,” she said, “But we haven’t stopped registering voters.”

In contrast to Trump, the Clinton campaign has invested in hundreds of field offices in places across the political map, including in several traditionally conservative states like Virginia and North Carolina that have become toss-ups in recent elections.

In Virginia, several of Clinton’s 29 offices are located in the rapidly expanding — and increasingly Democratic – suburbs of Northern Virginia, just outside of Washington, D.C. But she has also opened up offices in more conservative counties farther south in the state, like Chesterfield and Henrico, a sign the campaign is confident voters in those areas are receptive to her message. 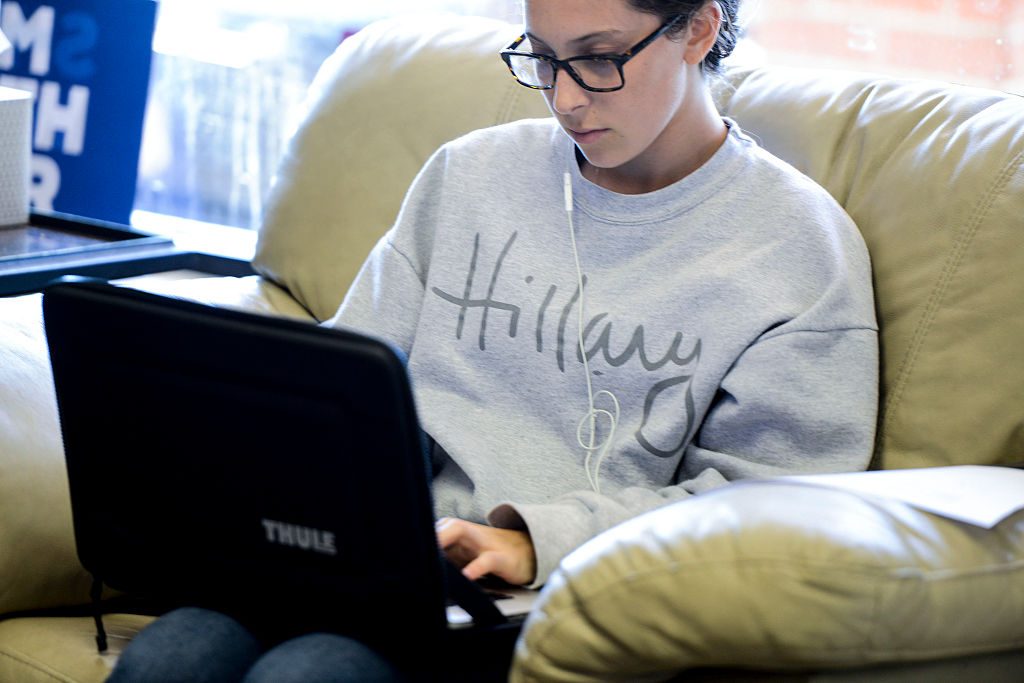 A Hillary Clinton supporter works on a laptop at the Virginia Victory Coordinated Campaign Field Office on Aug. 27 in Arlington, Virginia. Photo by Leigh Vogel/Getty Images

In North Carolina, which Obama won in 2008 and narrowly lost four years later, the Clinton campaign has opened 26 offices, most of them in the past month. Trump has just one field office in the state.

Clinton has 34 field offices open in Florida, for example, a state Trump likely needs to carry in order to win the election. A similar contrast exists in Pennsylvania, where Clinton has 36 field offices. Trump has just two offices open right now, though the campaign told the NewsHour it plans to open more than 20 in the near future.

Since 2012, Republicans in Florida have registered some 300,000 more voters than Democrats.

Trump needs a large turnout among white, mostly working-class voters in western Pennsylvania to win the state. But Clinton has opened several offices in that part of the state, including nine on one day in mid-August alone, in an effort to make inroads with moderate blue-collar voters who may be hesitant to vote for Trump.

To all that, add a profound and polished data game. The Clinton campaign has been working for nearly two years on a digital package that takes the renowned Obama data model and adds to it, allowing the campaign to tailor messages, volunteer requests and specific ads to individuals. Trump has said that data is “overrated” in presidential campaigns.

The Trump strategy, like Clinton’s, targets a range of states.

North Carolina, with 12 offices planned, is the red state with the largest presence expected.

And Trump officials insist they are building up large infrastructure in traditionally blue states like Wisconsin and Michigan, where the campaign says it plans to open 26 and 25 field offices, respectively. And, Trump officials point out, even without the majority of their offices in place, their campaign has begun to close in on Clinton in the polls in a few battleground states.

The Trump team is also counting on something that is harder to measure: voter passion.

In Michigan, Trump state director Scott Hagerstrom said he has never seen the response he has witnessed over the past few weeks.  “We are used to having to beg people to volunteer but now we’re seeing huge demand,” he said. Several other Trump state directors echoed the thought and insisted they are running out of yard signs.

But what Team Trump calls passion, others called a campaign still looking for a foothold with 70 days until Election Day.

“Offices are bricks and mortar,” said Trump Florida strategist Giorno. “That doesn’t make a campaign. What makes a campaign is the people. And we have an army of people we have not deployed yet.”