The party’s presidential front-runner told supporters on Saturday that he’s out to bring independents and Democrats behind his cause even though “right now I’m catering to the Republicans.”

Contenders in both parties bid for an edge ahead of Wisconsin’s primaries Tuesday, none more actively than Trump, who’s had a rough week and faces a likely struggle against Texas Sen. Ted Cruz in the state.

The Republican race is overshadowed by a persistent effort by Trump’s rivals in the campaign and the party to force the nomination fight into the July convention – and by his equivocations on whether he will be loyal to the GOP or bolt for an independent candidacy if he feels mistreated.

In Racine, in the first of his three rallies Saturday, Trump said little to suggest his allegiance with the GOP is cast in stone. He offered the critique that the Republican Party had a “falling-asleep reputation” until his campaign caught fire and brought millions of new voters out to primaries and caucuses.

And he sharply challenged Cruz, who appears to have the advantage in the Wisconsin race. “There’s such deception and lying,” he said of his rival.

Cruz sought favor in North Dakota, which is not holding a primary or caucuses in the 2016 Republican race. He addressed Republicans at a state convention that is selecting delegates who will go to the national convention unbound to any of the presidential candidates.

Trump and Ohio Gov. John Kasich sent supporters on their behalf to make the case that they should be backed by North Dakota’s delegates at the Cleveland convention in July.

The outcome in Wisconsin will help determine whether Trump can seize the Republican nomination without a fight at the convention.

The Democratic race has grown increasingly bitter, too, though it’s not matched the GOP contest for raw hostility. Hillary Clinton and Bernie Sanders were set to attend a Wisconsin Democratic Party dinner. Their attention will quickly turn to an even more consequential contest, in New York on April 19, where the Democratic front-runner dearly hopes to avoid an upset in the state she served as senator.

Sanders urged rally-goers to come out in droves Tuesday.

“Here is the political reality,” he told a young and pumped-up crowd on the University of Wisconsin’s Eau Claire campus. “If there is a large voter turnout, if working people, many of whom have given up on the political process, if young people come, perhaps for the first time … we will win on Tuesday.”

“But, if there is a low voter turnout, we will probably lose. So, I am here to ask you all, not just to come out to vote, but to bring your friends, your aunts and your uncles – let us have the largest voter turnout in Wisconsin primary history.” 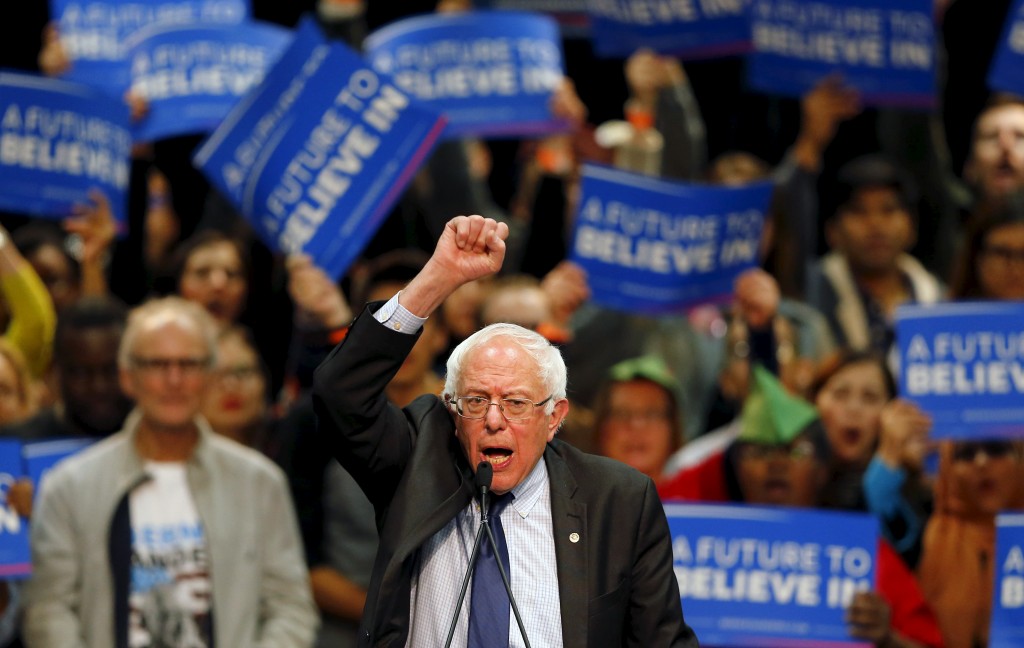 Bundled up in winter jackets and gloves, Sanders supporters waited for hours to hear him.

Sophomore Joseph Lehto said he probably will vote for an independent if Sanders doesn’t get the nomination. “Hillary Clinton is a conservative disguised by mildly social policies” he said. “She is a more of warmonger than just about anyone.”

At Trump’s second rally, in Wausau, five young men wearing T-shirts emblazoned with “Trump’s wall” positioned themselves behind the candidate and drew cheers from the crowd. Some had walked in after visiting the adjacent bar hosting a meeting of the Wisconsin Bear Hunters Association.

Many in the crowd seemed unfazed by Trump’s recent troubles, even after his shifting stance on abortion indicated anew that he may struggle to draw female voters.

Trump supporter Brian Reif, 43, said “Reagan changed his mind on the issue, too” and he wasn’t bothered by Trump’s occasional harsh statements about women.

“I don’t believe Mr. Trump is meaning to obliterate women with his words,” said Reif, who works in manufacturing in nearby Stratford. “But he will hit back. Mr. Trump is like a porcupine: If you mess with him, he shoots the quills.”

Also in the crowd was Sue Staab, who printed custom signs calling Trump “a guardian angel from heaven.”

Wisconsin has emerged as a proving ground for anti-Trump forces as the front-runner’s campaign hit a rough patch. Trump defended his campaign manager after he was charged with battery against a reporter, backtracked from comments that women should be punished for having abortions, encountered a buzz saw of hostile interviews by conservative Wisconsin talk radio hosts and watched Cruz rise in some preference polls in the state.

In an interview Friday, to be broadcast on “Fox News Sunday,” Trump left open the question of an independent candidacy when asked about it. “I want to run as a Republican,” Trump said. But if he doesn’t get the nomination? “I’m going to have to see how I was treated. Very simple.”

Virus relief bill remains up in air as negotiations resume

Nuclear bailout tied to bribery scandal was years in making

With loan money gone, restaurants are at mercy of virus