CAMBRIDGE, MA — Would a fourth presidential debate between Donald Trump and Hillary Clinton closer to Election Day have changed the outcome?

Clinton communications director Jennifer Palmieri thinks so — and she regrets not asking for one. Palmieri said Clinton did best directly comparing herself with now President-elect Trump. “It was Hillary unfiltered and the clarity of the choice,” she said.

If she had asked, the Trump campaign would have agreed — and it wouldn’t have changed anything, said Trump’s deputy campaign manager David Bossie. After a shaky first debate, he said, Mr. Trump only got better and needed less preparation. In the days following the last two debates, Bossie added, “we had to find bigger and bigger arenas” for rallies.

Palmieri and Bossie were among the top officials of all the major 2016 Republican and Democratic presidential campaigns — except John Kasich’s — who gathered at the Institute of Politics of Harvard University’s John F. Kennedy School of Government for a two-day review of the campaign just finished by the managers who ran the campaigns.

It was clear at the conference that the three weeks since Election Day have done little to diminish the bitterness and rancor between the Trump and Clinton camps. The two sides clashed angrily over whether Mr. Trump played on racial fears and resentments, which side got the worse media coverage, and which side ran the more negative campaign. 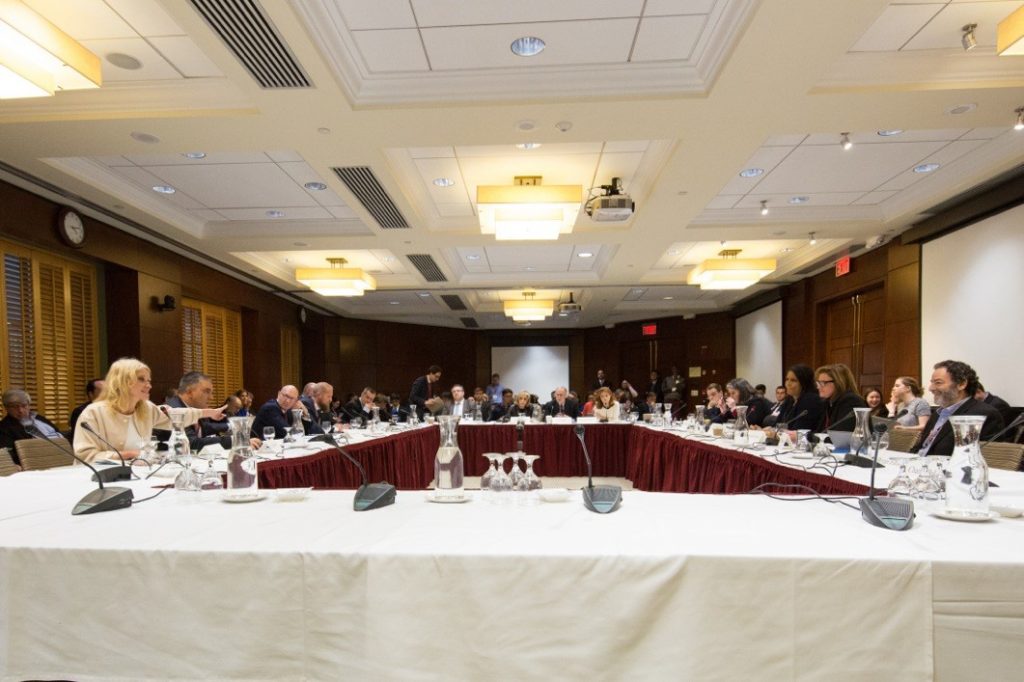 It was clear that the three weeks since Election Day have done little to diminish the bitterness and rancor between the Trump and Clinton camps as the top officials of all the major 2016 Republican and Democratic presidential campaigns — except John Kasich’s — gathered at the Institute of Politics of Harvard University’s John F. Kennedy School of Government for a two-day review of the campaign. Photo by Martha Stewart

There were hard feelings, too, among those who ran the campaigns of the Republican candidates Mr. Trump defeated in the primaries. They were particularly bitter over what they saw as an imbalance in news coverage of their own candidates’ campaigns versus Trump’s.

That sentiment boiled over at an after-dinner panel that included Jeff Zucker, head of CNN. His claim that other campaigns turned down invitations to appear on his cable network was met by shouts of rival campaign officials from the audience, who said they weren’t allowed to call in, as Mr. Trump did, and were only invited to talk about the frontrunner.

The big question moderators wanted to know: What happened in the last 10 days leading up to Mr. Trump’s stunning victory?

Clinton campaign officials blamed the two letters from FBI Director James Comey — the first, which raised new questions about Clinton’s handling of classified information on a private email server, and then the second, just days before the election, clearing her.

Clinton campaign manager Robby Mook said that in the closing days, their private polls showed voters who had been supporting third-party candidates “returning home.” In other words, self-identified Republicans shifted to Mr. Trump and self-identified Democrats to Clinton. After the Comey letters, though, the movement to Clinton stopped while Mr. Trump continued to gain support.

Mook added that the first Comey letter, saying that new Clinton emails had been discovered and needed to be evaluated, stripped away her support among college-educated voters. The second letter, clearing Clinton, he said,energized the Trump base.

Trump campaign manager Kellyanne Conway said the shift to her candidate began before that. “Donald Trump turned over 200 counties that voted for President Obama twice,” she said several times.

Both camps complained about the media. But the Trump campaign said they succeeded in finding ways to bypass the mainstream media on Facebook and Twitter.

“The media had no idea what we did until we told them — and that’s the beauty of it,” said Trump digital director Brad Parscale.

Former campaign manager Corey Lewandowski hailed Mr. Trump for his ability to “monopolize the media. … He has an ability the change the environment with 140 characters.” Deputy campaign manager Michael Glassner quoted the candidate as saying that Twitter “was like owning the New York Times without the overhead.”

Mook said that the widespread perception that Clinton was a lock to be the 45th President of the United States hurt their campaign. He noted that she did not do as well among young voters as the campaign had projected and suggested that many voted for third-party candidates, believing that she would win no matter what. That sense of inevitability also hurt the Clinton campaign’s ability to recruit volunteers, according to chief digital strategist Teddy Goff.

Goff also noted that on social media, Clinton supporters faced blowback when declaring their support. That was in direct contrast to the experience of Barack Obama followers in 2012, when Goff ran that campaign’s digital strategy.

The leaders of Mr. Trump’s campaign repeatedly dismissed his controversial statements — about Mexican immigrants, banning Muslims immigrants and an Indiana-born judge of Mexican descent presiding over a lawsuit against him — as irrelevant.

“People didn’t vote on what offended them, they voted on what affected them,” Conway said.

When did the two campaigns realize that Donald Trump would be President?

Lewandowski said the candidate would routinely ask: “What do you think my odds are today?” Parscale said what he saw in the data from early and absentees votes in Florida and other states by the Friday before Election Day gave him the confidence to tell the candidate that he believed Mr. Trump win.

“He looked at me like I was crazy,” Parscale said with a laugh.

Conway added that Mr. Trump, ever the businessman who believes no deal is done until it’s final, refused to believe it until 1:36 a.m. ET Wednesday when he was projected to go over the 270 electoral votes he needed.

For Mook, the realization came on election night as results came in from Florida and North Carolina. Turnout among African-Americans wasn’t as high as what they had projected, and Trump support in rural, predominantly white counties was stronger.

As Mook thought back to that night, he paused and sighed.

“You’re making me relive a wonderful moment in my life,” he said with a sardonic chuckle.