The order, which also affects non-profits, promises “regulatory relief” for groups with religious objections to the preventive services requirement in the Affordable Care Act, according to a White House official. Those requirements include covering birth control and the move could apply to religious groups like the Little Sisters of the Poor, who have moral objections to paying for contraception.

Trump will sign the order as he marks the National Day of Prayer at the White House Thursday.

Trump will sign the order as he marks the National Day of Prayer at the White House Thursday. He was hosting members of his evangelical advisory board and planned to meet Roman Catholic leaders in the Oval Office before signing the order.

The White House did not release the full text of the order, and it was not clear just how the pledges stated within the order would be carried out. The order, which essentially would make it even less likely that a religious organization would lose its tax-exempt status because of a political endorsement, fall short of what religious conservatives expected from Trump, who won overwhelming support from evangelicals by promising to “protect Christianity” and religious freedom.

Ralph Reed, a longtime evangelical leader and founder of the Faith & Freedom Coalition, said he was briefed by White House officials about the text of the executive order. Reed called the provisions an excellent first step in the Trump administration’s plans for protecting religious freedom.

“This administratively removes the threat of harassment.”

Reed said he was “thrilled” by the language on the IRS restrictions on partisan political activity. “This administratively removes the threat of harassment,” Reed said in a phone interview. “That is a really big deal.” He said the language in the order related to the preventive care mandate will “ensure that as long as Donald Trump is president, that something like the Little Sisters of the Poor case will never happen again.” 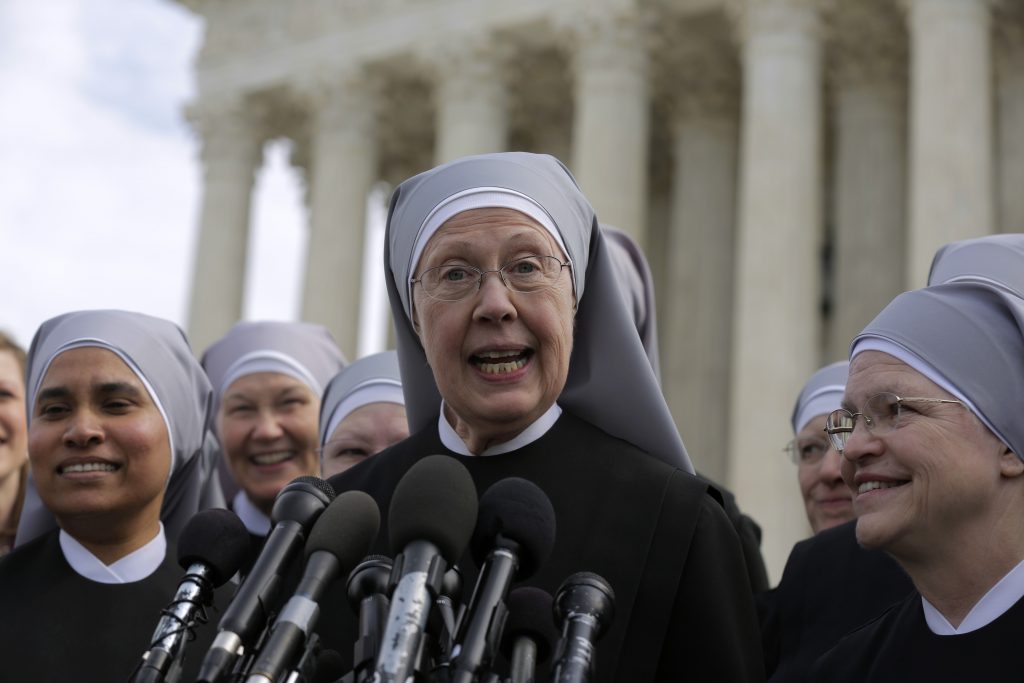 Sister Loraine McGuire with Little Sisters of the Poor speaks to the media after Zubik v. Burwell, an appeal brought by Christian groups demanding full exemption from the requirement to provide insurance covering contraception under the Affordable Care Act, was heard by the U.S. Supreme Court in Washington March 23, 2016. REUTERS/Joshua Roberts

Still, Mark Silk, a professor at Trinity College in Connecticut who writes extensively on religious freedom, called the planned actions as described by the White House as “very weak tea,” especially compared to the draft religious freedom executive order that leaked earlier this year, That document contained sweeping provisions on conscience protection for faith-based ministries, schools and federal workers across an array of agencies. “It’s gestural as far as I can tell,” Silk said. “It seems like a whimper.”

Trump has long pledged to protect religious freedom. He promised to “totally destroy” the law prohibiting the political activities, known as the Johnson Amendment, when he spoke in February at the National Prayer Breakfast, a high-profile Washington event with faith leaders, politicians and dignitaries. Fully abolishing the regulation would take an act of Congress, but Trump can direct the IRS not to enforce the prohibitions.

The White House official, who sought anonymity to speak despite the president’s criticism of anonymous sources, told reporters Wednesday night that the order will direct the IRS to use “maximum enforcement discretion” over the rule.

Fully abolishing the regulation would take an act of Congress, but Trump can direct the IRS not to enforce the prohibitions.

The regulation, named for then-Sen. Lyndon Johnson, was put into force in 1954 and prohibited partisan political activity for churches and other tax-exempt organizations. The policy still allows a wide range of advocacy on political issues, but in the case of houses of worship, it bars electioneering and outright political endorsements from the pulpit. The rule has rarely been enforced.

The IRS does not make public its investigations in such cases, but only one church is known to have lost its tax-exempt status as a result of the prohibition. The Church at Pierce Creek in Conklin, New York, was penalized for taking out newspaper ads telling Christians they could not vote for Bill Clinton in the 1992 presidential election. Even so, some religious leaders have argued the rule has a chilling effect on free speech, and have advocated for years for repeal.

While Trump’s action on the Johnson Amendment aims to please religious conservatives, some oppose any action that would weaken the policy.

In a February survey of evangelical leaders conducted by the National Association of Evangelicals, which represents churches from about 40 denominations, 89 percent said pastors should not endorse political candidates from the pulpit. Nearly 100 clergy and faith leaders from across a range of denominations sent a letter last month to congressional leaders urging them to uphold the regulation. They said the IRS rule protects houses of worship and religious groups from political pressure.

Easing political activity rules for churches also raises questions about whether churches could be pulled into the campaign finance sphere and effectively become “dark money” committees that play partisan politics without disclosing donors.

The order’s health care provision could apply to groups like the Little Sisters of the Poor, who run more than two dozen nursing homes for impoverished seniors, and have moral objections to paying the birth control costs of women in their health plans. The Obama administration created a buffer meant to shield those groups, but they said it didn’t go far enough. They continued to press their case in the courts. Last year, the Supreme Court asked lower courts to take another look at the issue.