Donald Trump boasted this week that his campaign has inspired “millions of additional people” to vote in the Republican primaries.

Compared to the last presidential election, Republican turnout this year is up “72 percent, and it looks like even much more than that,” Trump said at a press conference in Washington, D.C. In case anyone was wondering, he added, “That’s because of me.”

Trump’s claim was characteristically exaggerated, but numbers do point to a remarkable surge of enthusiasm among Republican voters. Through the latest round of voting on Tuesday, Republican turnout was 58 percent higher than at this point in the 2012 primaries, according to Public Opinion Strategies, a leading Republican research firm.

The trend has been seen throughout the country, from left-leaning states in New England to conservative states in the South. Maine’s Republican primary turnout shot up by an eye-opening 234 percent from 2012 to 2016; Texas drew 2.8 million GOP primary voters, doubling the total from four years ago.

Maine’s Republican primary turnout shot up by an eye-opening 234 percent from 2012 to 2016; Texas drew 2.8 million GOP primary voters, doubling the total from four years ago.
“It’s beyond anything we’ve seen before,” Tom Mechler, the chairman of the Texas Republican Party, said of the record turnout. Officials had prepared for an above-average turnout in the state, but the final “number was even higher than we expected.”

The turnout is being driven in large part by Trump, who entered the race with solid national name recognition thanks to his years in the spotlight as a real estate developer and reality television star.

“Obviously, there’s a huge amount of interest” in Trump, said William Kristol, the conservative strategist and editor of The Weekly Standard.

But party insiders, strategists and political scientists identified several other factors contributing to the rise in primary GOP turnout that have little to do with Trump — and that could help determine the level of support he might receive in a general election match-up against Hillary Clinton.

Consider North Carolina. In 2012, North Carolina held its Republican presidential primary in May. Mitt Romney had all-but secured the party’s nomination by then, which decreased the incentive for voting in a contest that had already been decided.

This year, the Republican National Committee allowed North Carolina to move its primary up to March 15, the same day as the critical winner-take-all states of Florida and Ohio. It was a pivotal moment in the race, which gave voters a greater say in determining the outcome.

Trump’s success that night — he won North Carolina, Illinois and Florida by comfortable margins — knocked Senator Marco Rubio of Florida out of the race, and cemented his position as the GOP front-runner.

“Moving the primary date up made us more relevant to the national debate,” said a conservative leader in the state, who requested to speak on the condition of anonymity.

The state’s recent population boom also might have played a role in driving up Republican turnout. North Carolina had the fifth largest population growth of any state in the nation between 2010 and 2015, and added roughly 300,000 residents between the 2012 presidential election and the end of last year, census records show. “We just have more people voting,” the source said.

Democratic turnout in North Carolina increased 63 percent this year, compared to 2008, the last time the party held competitive primaries. But the state was a rare bright spot as turnout goes this cycle. Overall, Democratic primary turnout is down 19 percent, the Public Opinion Strategies analysis found. 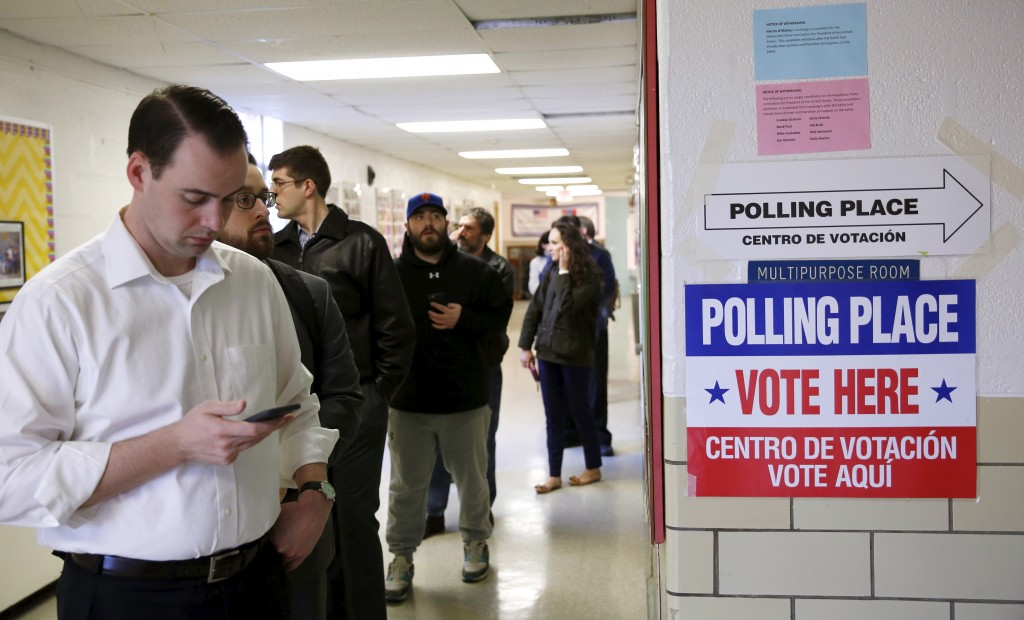 Voters in Arlington, Virginia, line up early to cast their ballots in Super Tuesday elections March 1, 2016. Photo by Gary Cameron/Reuters

Mechler said that Texas’s decision to move its primary up to March 1 also increased voter turnout, as did the fact that a popular home state senator, Ted Cruz, was on the ballot and competing hard to win the state (Cruz beat Trump there by 17 points).

Others argued that the record turnout has more to do with a strong initial primary field, compared to 2012, than it does with any changes in the primary calendar or state-by-state population shifts.

Romney’s record as the governor of a liberal state and his reputation for flip-flopping on issues like healthcare reform, coupled with his seemingly inevitable march to the nomination, was a turn-off for many conservative primary voters, said Roy Fletcher, a Republican strategist.

“It may well be that Romney was a blasé candidate,” said Fletcher, who served as John McCain’s deputy campaign manager in 2008. “This is different. Like him or hate him, Donald Trump lets you know where he stands.”

Trump has certainly taken clear positions on immigration and national security. Earlier this week, in response to the terrorist attacks in Brussels, he said that as president he would support the use of waterboarding and other forms of torture to interrogate terrorist suspects.

The comments drew heavy criticism from Clinton, who has sought to portray Trump as a divisive, unhinged candidate who is unprepared for a position as serious as the presidency.

Polls show that moderate Republicans — not Democrats and independents, as Trump often claims — have also helped boost turnout numbers in 2016.
But turnout is rarely driven by policy differences alone. In recent decades, the party vying to take back the White House has had an easier time rallying its base than the party seeking to hold onto the presidency.

After eight years of a Democrat in the White House, most Republican voters are simply eager for a change, said Steve Schale, a Democratic consultant.

“We benefited from this in 2008,” said Schale, who ran President Obama’s campaign in Florida. “There’s always more voter energy about taking [the White House] back than keeping someone in there.”

Trump has capitalized on that energy more effectively than his Republican rivals, in part by making a direct appeal to white, working class voters on issues like immigration and trade. But Trump has also refused to portray himself as a traditional ideological conservative, which has left the door open for moderate Republicans to support his campaign.

Chandler Hazen, a mechanic from Phenix, Alabama, said he was convinced that Trump would be able to grow the economy and protect the country from terrorist attacks.

“Trump is the man,” said Hazen, 19, who described himself as a moderate conservative. “He’s the one that’s going to take care of this nation and bring us back.”

Polls show that moderate Republicans — not Democrats and independents, as Trump often claims — have also helped boost turnout numbers in 2016.

According to the analysis by Public Opinion Strategies, which included the most recent round of voting on Tuesday in Utah, Arizona, and Idaho, 42 percent of Republican primary voters so far this year identify themselves as “somewhat conservative,” up from 33 percent at this stage in the 2012 race.

The share of the GOP primary electorate that identified as Democrat stayed steady at 5 percent, while the percentage of independents grew one point, from 26 to 27 percent.

“He doesn’t fit neatly in the Republican party,” said Danielle Vinson, a political science professor at Furman University in South Carolina. Trump is seeking out voters “who may think of themselves as Republican, but aren’t ideologically conservative.”

That approach has produced victories in key swing states like Florida, which Trump carried by 18 points earlier this month. Turnout in Florida’s Republican primary was 2.3 million — up 42 percent from 2012.

Still, he only captured 45 percent of the vote, a stark reminder that in Florida and elsewhere much of the turnout on the Republican side has been driven by voters who don’t support Trump, or are actively trying to block him from winning the nomination.

“It’s too soon to tell” if Republican enthusiasm in the primaries will carry over into the general election, said Geoff Garin, a leading Democratic pollster.

“But I think the phenomenon that has operated in the nominating contest will operate in a similar way in the general election,” Garin said. “People will turn out both to vote for and against Donald Trump.”

Sybil Ammons, a coroner from Lumpkin, Georgia, said she supported Cruz in the state’s primary because she did not want Trump to become the party’s standard bearer.

“I’m concerned. I think a lot of people are,” Ammons said. “But if he’s the Republican candidate, then he has my vote.”

Left: Donald Trump claims he's inspiring "millions" of new voters. Whether or not he's the reason, the numbers are clear: Republican turnout is up 58 percent so far this year compared to this point in the 2012 primaries. Photo by Sam Mircovich/Reuters