Trump is unblocking more Twitter users. What about the rest?

Several people who have been blocked by President Donald Trump on Twitter were unblocked Tuesday, the latest reaction from the White House to a federal ruling that said restricting access to his social media account is a violation of the First Amendment.

On Tuesday, Trump’s Twitter account unblocked the account belonging to The Party for Reason and Progress, according to David McAfee, the group’s chief executive officer. McAfee said in an interview that the group was blocked from following Trump on Twitter last year after criticizing the president for failing to push more legislation through a Republican-controlled Congress.

It’s the latest development in a legal battle over free speech and how presidents use social media, a part of the internet where many laws and regulations are still being set. Trump is only the second president to tweet, and his use of a personal Twitter account in office has tested political and legal conventions, forcing a new debate over presidential communication.

The legal fight in question started in July 2017, when seven plaintiffs represented by the Knight First Amendment Institute at Columbia University sued the president, claiming that he violated their right to free-speech by blocking them on Twitter.

Trump has used his personal account, rather than the official @POTUS and @WhiteHouse handles, to comment on matters of national security and other policy issues, engage in international diplomacy, endorse candidates and announce cabinet appointments. He has also continued to use social media the way he did during his presidential campaign, attacking critics and apparently blocking Twitter users from following his account.

But once Trump took an oath, experts argued his Twitter feed became a digital town hall and therefore had to be open to everyone.

In May, a federal court agreed, saying that blocking Twitter users violated First Amendment protections under the Constitution. But the judge stopped short of ordering the president to unblock accounts, allowing other users to pursue legal action, too.

In June, the Justice Department notified seven users that their accounts were being unblocked.

That Trump’s account has started unblocking more users indicates the Justice Department doesn’t “want to have further litigation about whether the court could take a further step” in forcing a president to unblock followers on Twitter, said Katie Fallow, staff attorney with the Knight Institute who represented the original seven plaintiffs in the lawsuit.

It’s unclear whether Trump, who sometimes receives assistance in crafting his tweets, unblocked the users himself, or whether they were unblocked by an aide. There is also no publicly available data on the number of Twitter accounts Trump or his staff have blocked. 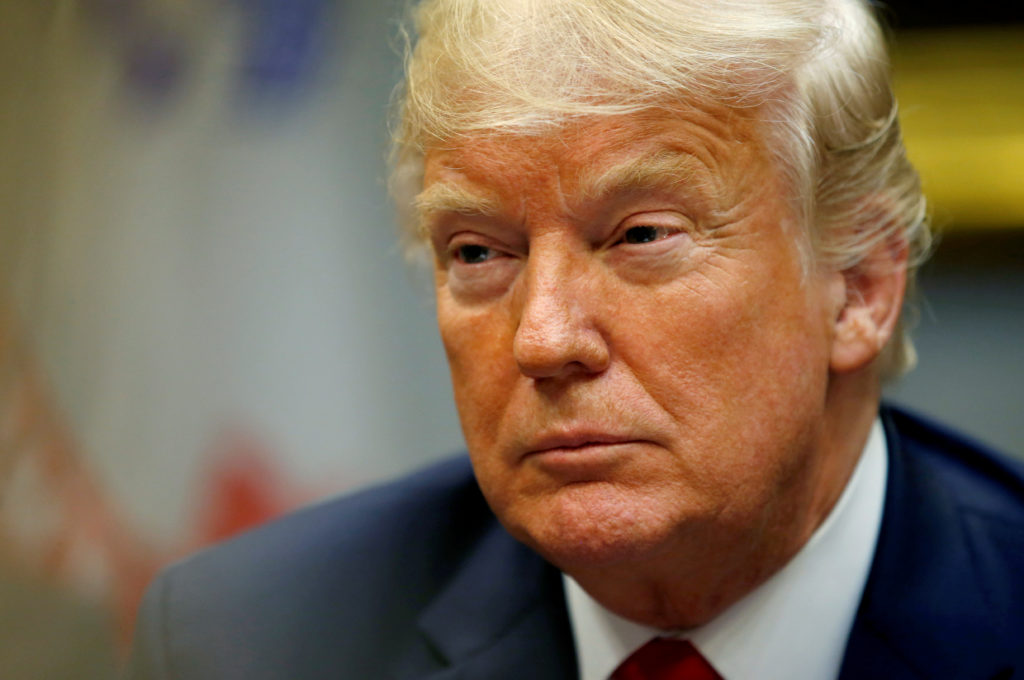 President Donald Trump at an event at the White House on August 29, 2018. Trump’s Twitter account this week unblocked several followers, the latest move in a legal battle over the president’s use of the social media platform. REUTERS/Leah Millis

In a court briefing field earlier this month, the Justice Department called the ruling “fundamentally misconceived” because “the @realDonaldTrump account belongs to Donald Trump in his personal capacity and is subject to his personal control, not the control of the government.”

The Justice Department, which is appealing the ruling that blocking Twitter followers was unconstitutional, declined to comment for this story. The White House did not respond to requests for comment. The Knight Institute must respond to the appeal by Oct. 12. A court date has not been set.

After those seven users were unblocked in June, The Knight Institute asked the White House to unblock 41 additional users and sent those requests to the Justice Department for review.

That request appears to have led to the White House’s decision Tuesday to unblock several more of Trump’s Twitter followers — people like the Huffington Post blogger Ostroy whose accounts were blocked by Trump after posting critical remarks about the president..

Ostroy said his account was blocked by Trump during the health care debate last year, after he tweeted that the president and Republicans were working “behind closed doors killing #Obamacare.”

"Kill healthcare?" Are u f'ing kidding? U & Repubs r behind closed doors killing #Obamacare & leaving 23-million w/o care. Shame on u #trump

In an interview before his account was unblocked, Ostroy said he considered Trump’s block “a badge of honor” at the time, even though he disagreed with the action.

“This is a recurring theme with this administration, it believes they’re above the law” said Ostroy, who says he remains blocked by the president’s daughter and senior advisor Ivanka Trump, as well as Trump’s former lawyer Michael Cohen.

“When so many people in this country have fallen victim to Donald Trump’s reprehensible attempt to strip them of their constitutional rights, winning this battle feels like a major victory for democracy and the rule of law,” Ostroy added.

While Ostroy and groups like The Party for Reason and Progress prevailed, others said they’re still waiting to be unblocked.

Jon Soltz, a veteran and co-founder of VoteVets.org, said his group has been blocked by Trump’s Twitter account for more than a year.

“Veterans of the United States shouldn’t have to bring action against the president to get unblocked,” said Soltz, whose group’s account was not among the 41 blocked accounts that the Knight Institute sent to Justice Department for review. “We want him to do it because he’s matured as a president.”

Danny Zuker, an executive producer of ABC’s Modern Family, submitted his account to the Justice Department for review but said late Tuesday that he remains blocked by Trump.

Dani Bostick, a psychotherapist in Colorado Springs, also submitted her account to the Knight Institute and Justice Department. Bostick said Tuesday she was still waiting to get unblocked

“I am not unblocked and am disappointed,” Bostick said. “Especially since I kept my tweets to him well within the Twitter terms of service.”