May spokesman James Slack said Britain First seeks to divide communities through its use of “hateful narratives which peddle lies and stoke tensions.” He said “it is wrong for the president to have done this.” 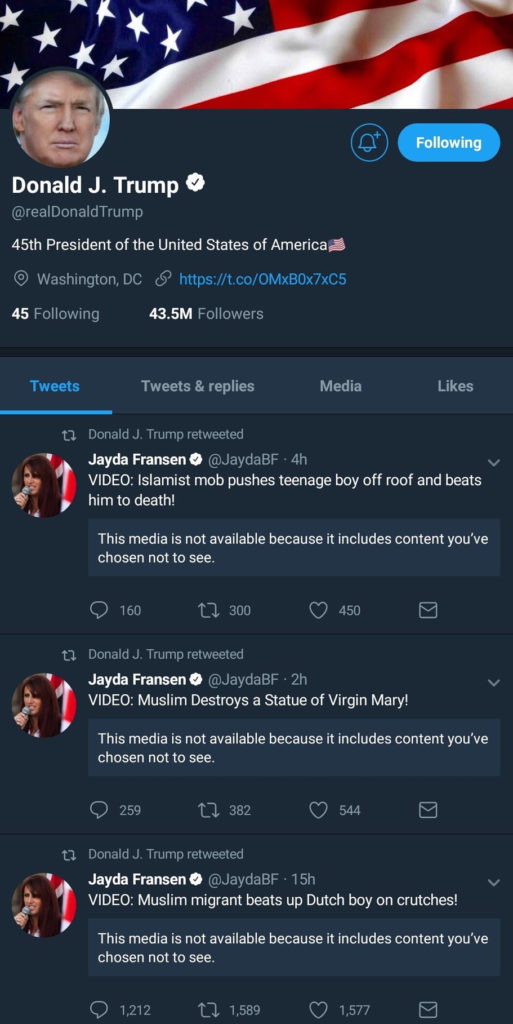 But May’s office said an invitation for Trump to pay a state visit to Britain was not being withdrawn, amid calls from opposition politicians for the visit to be canceled.

Trump did not offer any explanation for why he retweeted the videos. White House spokeswoman Sarah Huckabee Sanders later defended his early-morning posts, saying he wants to “promote strong borders and strong national security.”

Asked if the president had a responsibility to verify the content, Sanders said: “Whether it’s a real video, the threat is real and that is what the president is talking about.”

Sanders said that May and other world leaders “know that these are real threats.”

Britain First is a group that opposes multiculturalism and what it calls the “Islamization” of Britain. It has run candidates in local and national elections, with little success, and has campaigned against the construction and expansion of mosques. Fransen picked up nearly 10,000 Twitter followers in the hours following Trump’s retweets.

The Council on American-Islamic Relations strongly condemned Trump’s tweets. Nihad Awad, the group’s executive director, said in a statement that Trump is “clearly telling members of his base that they should hate Islam and Muslims.”

Awad addressed Trump in his own tweet, saying the council has recorded 3,296 anti-Muslim incidents this year and yet “we haven’t heard a peep from you. Some president.”

Arab American Institute Executive Director Maya Berry said in a statement that Trump’s “words and beliefs normalize and lend credence to hate, putting Americans at risk of violence on a daily basis.”

The American Civil Liberties Union, in a tweet, said, “Trump’s prejudice against Muslims reveals itself at every turn_with today’s tweets meant to gin up fear and bias, with statements like ‘Islam hates us,’ and with every version of the Muslim ban.”

Former Ku Klux Klan leader David Duke welcomed the videos, tweeting: “Trump retweets video of crippled white kid in Europe being beaten by migrants, and white people being thrown off a roof and then beaten to death, He’s condemned for showing us what the fake news media WON’T. Thank God for Trump! That’s why we love him!”

One video from 2013 showed a radical Islamist in Egypt throwing a 9-year-old boy off a roof. The video was filmed in Egypt days after the overthrow of Islamist President Mohammed Morsi by Egypt’s military. The perpetrators of the roof violence were later sentenced to death for killing the boy and another man.

Another shows a man — said to be a supporter of Syria’s al-Qaida affiliate then known as the Nusra Front — smashing a blue and white statue of the Virgin Mary. The video appeared on the internet in October 2013, in the midst of a civil war in Syria, and was reported by the Middle East Media Research Institute, MEMRI.

The third video shows two young men fighting near a river bank. It was originally posted to a Dutch viral video site in May 2017 and picked up by Dutch media the following day. Two 16-year-old boys were arrested, according to De Telegraaf, and police removed the video. The boys’ religion was not included in any of the reports.

It’s not the first time Trump has retweeted inflammatory content or posts from controversial Twitter accounts. He has shared messages from accounts that appeared to have ties to white nationalist groups. He has retweeted a conservative Trump supporter who used social media to draw attention to “pizzagate,” an unfounded conspiracy theory that claims Democrats harbored child sex slaves at a pizza restaurant. He has also retweeted doctored videos, including one that appeared to show him hitting Hillary Clinton with a golf ball.

Throughout his presidential campaign, Trump offered anti-Muslim commentary, saying he would “strongly consider” closing mosques and insisting that “Islam hates us.” As president he has sought to ban travel from majority-Muslim countries. He said earlier this year that “we have to stop radical Islamic terrorism.”

After Trump retweeted the videos, Fransen quickly responded on Twitter, saying: “DONALD TRUMP HIMSELF HAS RETWEETED THESE VIDEOS AND HAS AROUND 44 MILLION FOLLOWERS! GOD BLESS YOU TRUMP! GOD BLESS AMERICA!”

Fransen has been charged with causing religiously aggravated harassment through leaflets and videos that were distributed during a criminal trial earlier this year. She has separately been charged with using “threatening, abusive or insulting words or behavior” in a speech she made in Northern Ireland in August. She is currently free on bail.

She was convicted last year of religiously aggravated harassment and fined after hurling abuse at a Muslim woman wearing a hijab.

Trump’s retweets were condemned by Brendan Cox, whose British lawmaker wife Jo Cox was murdered last year by an attacker with far-right views.

Cox tweeted: “Trump has legitimised the far right in his own country, now he’s trying to do it in ours. Spreading hatred has consequences & the President should be ashamed of himself.”

Trump’s tweets were also condemned by TV host Piers Morgan, who tweeted: “Good morning, Mr President @realDonaldTrump – what the hell are you doing retweeting a bunch of unverified videos by Britain First, a bunch of disgustingly racist far-right extremists? Please STOP this madness & undo your retweets.”