On election night in 1960, Richard Nixon stepped in front of the cameras at his campaign headquarters to deliver a brief concession speech. The final votes were still being tallied, but the outcome was no longer in doubt.

Standing in front of a large chalkboard displaying the results of the race, Nixon congratulated his Democratic opponent, John F. Kennedy, and pledged to give the next president his “wholehearted support.”

In the half-century since, the concession speech has evolved into a major event. John Kerry used Boston’s historic Faneuil Hall as the backdrop for his concession speech in 2004. Mitt Romney conceded the 2012 race on a flashy stage decorated with American flags and images of the Statue of Liberty.

And yet, despite these changes, the core message behind the concession speech has remained the same. It typically goes something like this: the American people have spoken, the election was fought fair and square, and now it’s time to move forward as a nation.

This year, things could go quite differently.

Donald Trump has refused to say that he will accept the election results on Nov. 8, and has claimed falsely that the race is rigged. The claim has gained traction with many Trump supporters, including some who have warned of a violent revolution if he doesn’t win.

Robert Dallek, a historian and expert on the American presidency, said that it was anyone’s guess what Trump might say if he goes down in defeat to Hillary Clinton, because the Republican nominee is so “mercurial and erratic.”

“Nobody knows what Trump is going to do. I don’t know if he knows what he’s going to do,” Dallek said. He added that it was unprecedented for a major-party nominee to question the entire electoral system.

“In this election, I think the concession speech is becoming more significant, because of Trump’s attitude,” Dallek said. “We’ve never had someone come out and say, ‘Let’s take to the hills and fight.’”

A tradition slow in the making

The concession speech is seen as standard procedure now, but that wasn’t the case in the earliest days of the republic.

Part of it was timing. Before 1845, when Congress passed a law mandating that every presidential election take place on the Tuesday after the first Monday in November, states were free to hold their votes on different days.

The patchwork system meant that results didn’t come in at the same time each election, so there was no “obvious turning point” for the runner-up to make a formal concession, said Barbara Perry, the director of presidential studies at the University of Virginia’s Miller Center.

Technology also played a role. In the late 18th and early 19th centuries, there were no means, other than in-person conversation, for two candidates to communicate in the hours after the race was decided—and no real-time way to broadcast a concession to voters.

That changed with the rise of the telegraph, telephone, and wire news services, and, later, the spread of radio and television. “The tradition of contacting an opponent on election night solidified in the early 1900s,” Perry said.

The practice took hold slowly, over more than a century. But the idea of conceding a defeat with grace — or, conversely, not gloating over victory — has always resonated with the American public, Perry said.

She pointed to Abraham Lincoln’s second inaugural address, delivered two months before the Civil War ended, in which he called on a divided nation to come together “with malice toward none, with charity for all.”

The idea of conceding a defeat with grace — or, conversely, not gloating over victory — has always resonated with the American public.

“I do think it’s a deep-seated part of the American spirit. Both on the battlefield and on the metaphorical battlefields of athletics and politics,” Perry said. “It’s what you teach Little Leaguers or kids playing soccer,” she added. “When the game is over, no matter how hard fought it is, or if it goes into five overtimes, they line up and shake hands.”

By the time that Nixon conceded to Kennedy in 1960, delivering a short, gracious concession speech was a routine part of the runner-up’s responsibilities. Acting like a sore loser was frowned upon.

On election night in 1976, Gerald Ford’s voice was so hoarse from campaigning that he decided not to give a concession speech. But instead he asked his wife, Betty Ford, to read the telegram he sent to Jimmy Carter earlier that evening, after the race was called.

“Dear Jimmy, it is apparent now that you have won our long and intense struggle for the presidency,” the message began. “I congratulate you on your victory.” Ford went on to write, “I believe that we must now put the divisions of the campaign behind us, and unite the country once again in the common pursuit of peace and prosperity.”

The friendly telegram, which Betty Ford read aloud to the press as her husband and the rest of their family looked on, seems quaint by today’s hyperpartisan political standards. At one point during the reading, a sad and exhausted-looking Gerald Ford sighed deeply, in a visible effort to maintain his composure. 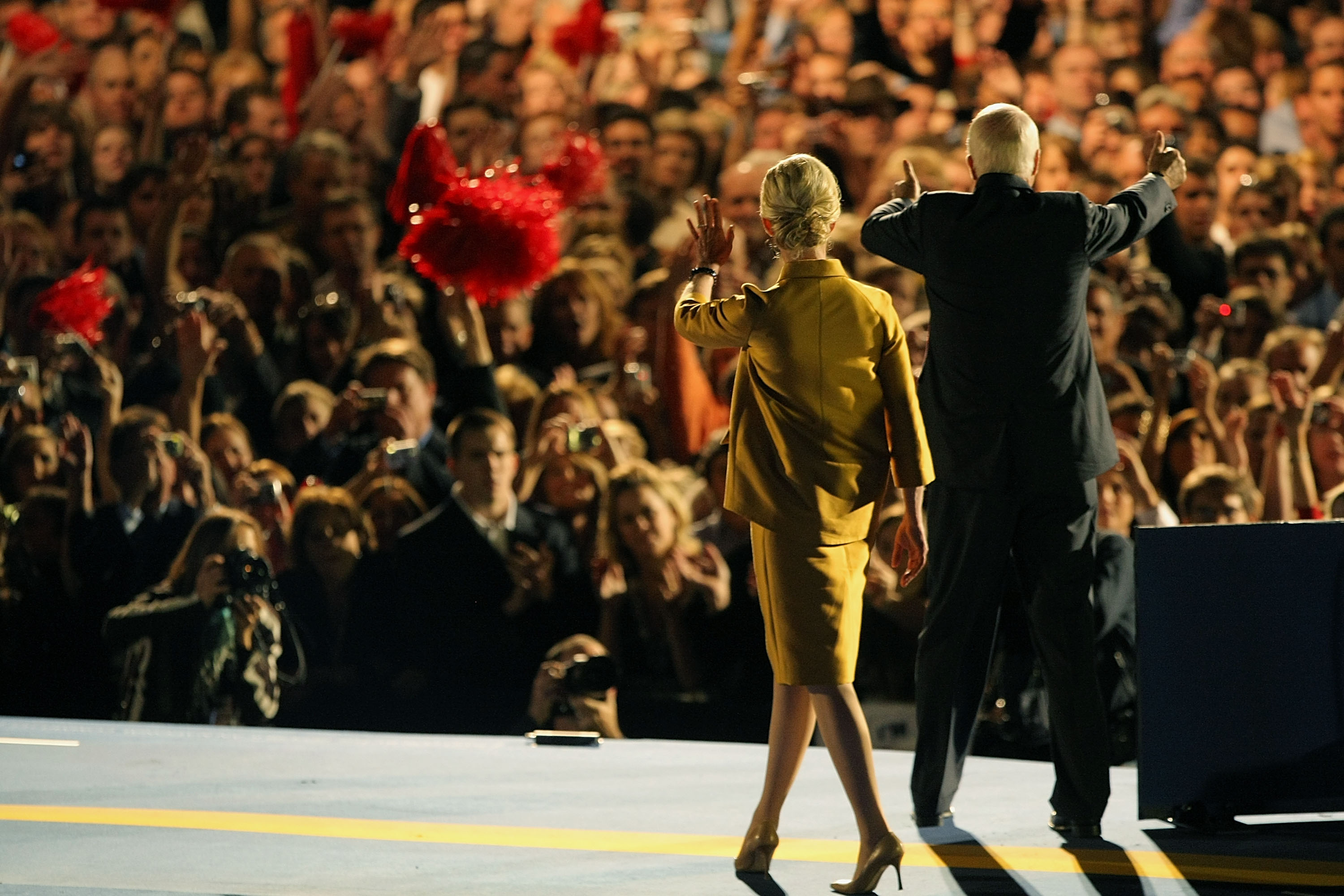 John McCain and his wife, Cindy McCain, greeted supporters at his concession speech in Phoenix, Arizona in 2008. Photo by Doug Pensinger/Getty Images

More recently, campaigns have turned the concession speech into a larger and less intimate production.

Michael Dukakis paved the way with his 1988 speech. It included music and an (‘80s-era) electronic light show. The event more closely resembled a campaign rally, and it set the tone for future concessions.

John McCain conceded to Barack Obama in 2008 on a big, floodlit stage in a park in Phoenix, Arizona. The setting for Romney’s concession in 2012 was even grander.

Heading into election night that year, Romney was so confident he would win that he didn’t write bother writing a concession speech ahead of time. Nevertheless, when it came time to concede, he stuck to the script.

At times the speech betrayed Romney’s disappointment with losing, but his respect for the electoral process was also evident.

“I so wish that I had been able to fulfill your hopes to lead the country in a different direction,” Romney told his supporters. “But the nation chose another leader. And so Ann and I join with you to earnestly pray for him and for this great nation.”

On December 13, 2000, after a Supreme Court ruling effectively ended one of the closest and most contentious elections in U.S. history, Al Gore gave his concession speech indoors, standing behind a blank podium.

“Let there be no doubt, while I strongly disagree with the court’s decision, I accept it,” Gore said. “I also accept my responsibility, which I will discharge unconditionally, to honor the new president elect and do everything possible to help him bring Americans together.”

Gore’s message lacked the pomp and circumstance of modern concession speeches. But Dallek, the presidential historian, said it stands out as the prime example of the country’s “tradition of peaceful transfer of power.”

“Conceding the election after that contested result in Florida was a demonstration of a regard for the national interest,” Dallek said.

This year, supporters on both sides are awaiting the closing chapter of the campaign with trepidation.

Clinton has given no indication that she would stray from tradition if she loses. Her supporters speculated that a Clinton concession speech would feel similar to the one she gave in 2008, after losing a divisive Democratic primary battle to Obama.

That speech is best remembered for Clinton’s declaration that, thanks to her primary supporters, the “highest, hardest glass ceiling” now had “about 18 million cracks in it.” But the rest of the speech — delivered before a large crowd at the National Building Museum in Washington, D.C. — was also remarkably forward-looking. 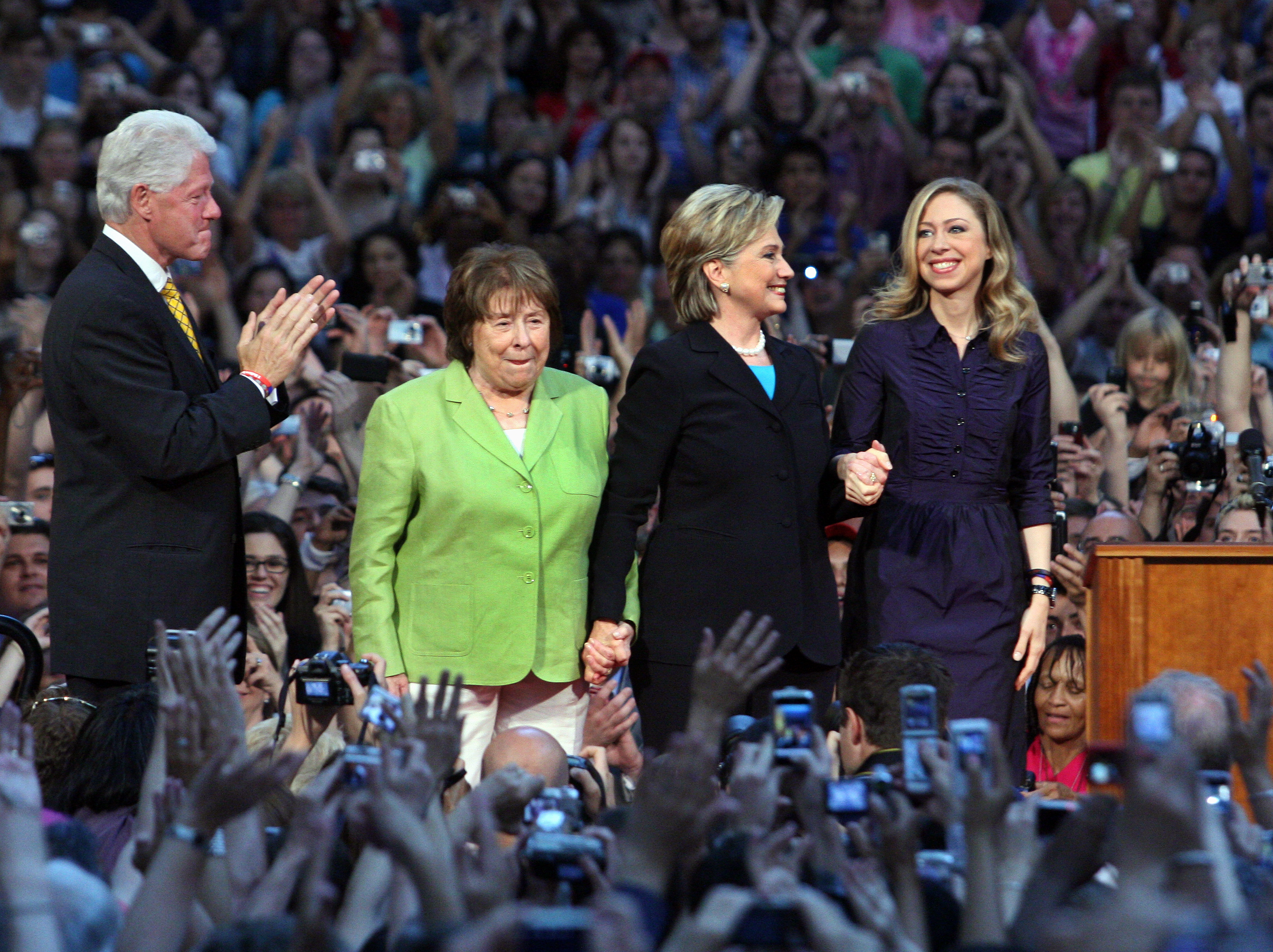 Hillary Clinton with her husband, former President Bill Clinton, her mother, Dorothy Rodham Clinton and daughter, Chelsea at her side before giving her primary concession speech in 2008. Photo by Richard A. Lipski/The Washington Post/Getty Images

Jerry Crawford, an attorney who served as the Midwest co-chairman of Clinton’s 2008 campaign, said that taking the “high road” positioned her for another shot at the White House.

“From that moment, Clinton was arguably the favorite for the presidency in 2016,” at least on the Democratic side, Crawford said. “If she had been bitter and caustic, then that wouldn’t have happened.”

Clinton also won praise from Democrats by immediately going to work on behalf of the party’s nominee. “She was on the phone with me two days later, asking me to do everything I could do to elect Barack Obama,” Crawford said.

Predicting Trump’s response if he comes up short on election night is more difficult.

Some of his fiercest supporters refused to entertain the possibility of a Trump loss, or guess at what his concession message might be, even though he entered the last days of the campaign trailing Clinton in the polls.

“I’m not even going to go there, because I think Hillary’s going to be giving the concession speech,” said Cindy Costa, a Republican National Committeewoman from South Carolina.

Robert Graham, the chairman of the Arizona Republican Party, said he thought that, in the event of a loss, Trump would grudgingly accept the final outcome but stop short of calling on the nation to support Clinton’s presidency.

“If there’s no obvious fraud or rigging of the polling stations, I believe that he’ll come out and give a traditional concession, in the sense that he’ll thank the American people for giving him a shot,” Graham said.

“But on the flip side of it, there’s going to be no love lost. He’s not going to be the guy who says, ‘We all need to get out and support Hillary Clinton,’” Graham added.

Democrats were less convinced that Trump would bow to tradition if Clinton won the election. And they pointed out that a defiant concession speech would represent a significant break from the past.

Tad Devine, who served as a senior adviser on Al Gore and John Kerry’s campaigns, recalled participating on a conference call between Kerry and his closest political aides the day after the 2004 election. Kerry was holed up in his Beacon Hill home with his running mate, John Edwards, and their wives. Kerry had waited to concede while the results from Ohio came in, but it was apparent that morning that he would lose.

As the advisers huddled in a room at the Copley Square Hotel in Boston, going over the returns with Kerry, it did not take him long to make a final decision, said Devine, the chief strategist for Bernie Sanders’ presidential campaign.

“It was not an emotional discussion,” Devine said. “Just listening to him, it was very businesslike.” Devine wondered if Trump was capable of taking a similar approach.

“If Trump were gracious and noble [in defeat], and stood there and talked about the rule of law, he could go a long way toward convincing people to step back from the edge,” Devine said.

On the other hand, Devine said, “if he wants to light a match, and put it to the fuse and walk away on election night, he can do that.”

Left: Richard Nixon giving his concession speech in Los Angeles on election night in 1960. Photo courtesy of the Bettman Archive and Getty Images