Trump says he and Mexican president discussed wall, not payment

MEXICO CITY — Standing alongside the president of Mexico, a measured Donald Trump on Wednesday defended the right of the United States to build a massive border wall along its southern flank, but he declined to repeat his frequent promise to force Mexico to pay for it.

Trump, the U.S. presidential candidate who is widely despised across Mexico, also sidestepped his repeated criticism of Mexican immigrants following a closed-door meeting at the official residence of the country’s president, Enrique Pena Nieto. Trump and Pena Nieto, who has compared the New York billionaire to Adolf Hitler, addressed reporters from adjacent podiums flanked by a Mexican flag.

“We did discuss the wall. We didn’t discuss payment of the wall,” Trump said.

In his announcement of his presidential candidacy last year, Trump derided Mexico as a source of rapists and criminals coming to the U.S., and his presence on Wednesday sparked anger and protests across the capital city. A former Mexican president bluntly told the celebrity businessman that, despite Pena Nieto’s hospitality, he was not welcome.

“We don’t like him. We don’t want him. We reject his visit,” former President Vicente Fox told CNN, calling the trip a “political stunt.”

Pena Nieto was less combative as he addressed reporters alongside Trump. He acknowledged the two men had differences, but he described their conversation as “open and constructive.” They shook hands as the session ended. 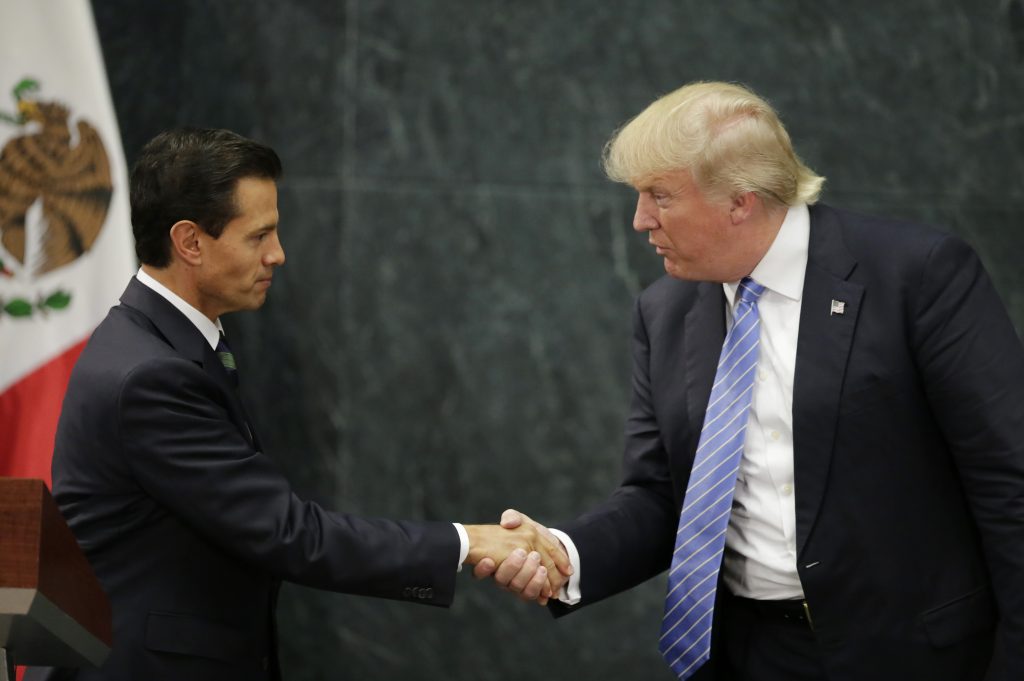 The trip, a politically risky move for Trump 10 weeks before America’s presidential Election Day, came just hours before the Republican nominee was to deliver a highly anticipated speech in Arizona about illegal immigration. That has been a defining issue of Trump’s presidential campaign, but also one on which he’s appeared to waver in recent days.

After saying during his Republican primary campaign he would use a “deportation force” to expel all of the estimated 11 million people living in the United States illegally, Trump suggested last week he could soften that stance. But he still says he plans to build a huge wall — paid for by Mexico — along the two nations’ border. He is under pressure to clarify just where he stands in a speech that’s been rescheduled several times as he and his staff has sent varied and conflicting messages on the issue.

“The American people are going to see more clearly that there’s one candidate in this race who’s prepared to take the steps necessary to end the flood of illegal immigration,” Trump’s running mate, Indiana Gov. Mike Pence, said Wednesday on CNN. Trump will also make clear, Pence later told CBS, “that there will be no path to legalization, no path to citizenship. People will need to leave the country to be able to obtain legal status or obtain citizenship.”

The buildup to the speech was abruptly interrupted Tuesday night by the news that Trump would visit Mexico, accepting on short notice an invitation offered last week by Pena Nieto. The newspaper El Universal wrote in an editorial that Trump “caught Mexican diplomats off guard.”

Campaigning in Ohio earlier in the day, Democrat Hillary Clinton jabbed at Trump’s Mexican appearance as she promoted her own experience working with foreign leaders as the nation’s chief diplomat.

“People have to get to know that they can count on you, that you won’t say one thing one day and something totally different the next,” she told the American Legion in Cincinnati. “And it certainly takes more than trying to make up for a year of insults and insinuations by dropping in on our neighbors for a few hours and then flying home again.”

He has promised, if elected, to deport millions of immigrants who are in the United States illegally, force Mexico to build a wall to secure the nearly 2,000-mile border and renegotiate the NAFTA trade agreement to make it more favorable to the United States.

As summer winds down, the presidential campaign ramps up. Both Donald Trump and Hillary Clinton highlighted racial issues this week, while Trump appeared to soften on immigration. Video by PBS NewsHour

Pena Nieto made his invitation to both Trump and Clinton, who met with him in Mexico in 2014. The inclusion of Trump puzzled many in Mexico, who said it wasn’t clear why their own unpopular president would agree to meet with someone so widely disliked in his country.

Mexico City-based security analyst Alejandro Hope suggested that Pena Nieto “wanted to invite Hillary, but that meant inviting both of them, and nobody thought Trump would accept first.”

Pena Nieto has been sharply critical of Trump’s immigration policies, particularly the Republican’s plans to build a wall and have Mexico pay for it. In a March interview, he said that “there is no scenario” under which Mexico would do so and compared Trump’s language to that of dictators Hitler and Benito Mussolini.

Trump responded to Vicente Fox’s criticism on Twitter earlier in the day, saying the former president had, like Pena Nieto, invited him to come. Fox shot back with a tweet of his own, saying he had invited Trump to “come and apologize to all Mexicans. Stop lying! Mexico is not yours to play with, show some respect.”