One of Trump’s favorite targets, former Florida Gov. Jeb Bush, finally threw in the towel, suspending his campaign after a dismal finish. “Thank you for the opportunity to run for the greatest office on the face of the earth,” an emotional Bush told his supporters.

Two freshmen senators — Ted Cruz of Texas and Marco Rubio of Florida — were battling for second place, which would give them bragging rights but might not get them any delegates in the march to the nomination.

In a family-affair victory speech, Trump ticked off his policy promises, vowing to terminate President Barack Obama’s health care law and get Mexico to pay for a wall at the border.

“We’re going to start winning for our country because our country doesn’t win anymore,” said Trump, with his wife, Melania, and daughter Ivanka at his side.

Their likely finish undercut the value of some coveted South Carolina endorsements. Rubio had the backing of Gov. Nikki Haley and Sen. Tim Scott; Cruz got the support of former Gov. Mark Sanford, now a House member.

Exit polls showed 4 in 10 voters angry about how Washington is working, and more than half saying they felt betrayed by politicians in the Republican Party.

“I don’t like politicians,” said Jim Jaruszewicz, a 37-year-old radiology technician who voted for Trump. “I don’t trust politicians.”

Trump’s victory capped a week in which he called rivals liars, blamed House Speaker Paul Ryan for the GOP’s loss in the 2012 presidential race, and even tangled with Pope Francis.

He was backed by nearly 4 in 10 of those who are angry at the federal government, and a third of those who feel betrayed. He did best with men, older voters, those without a college degree and veterans. 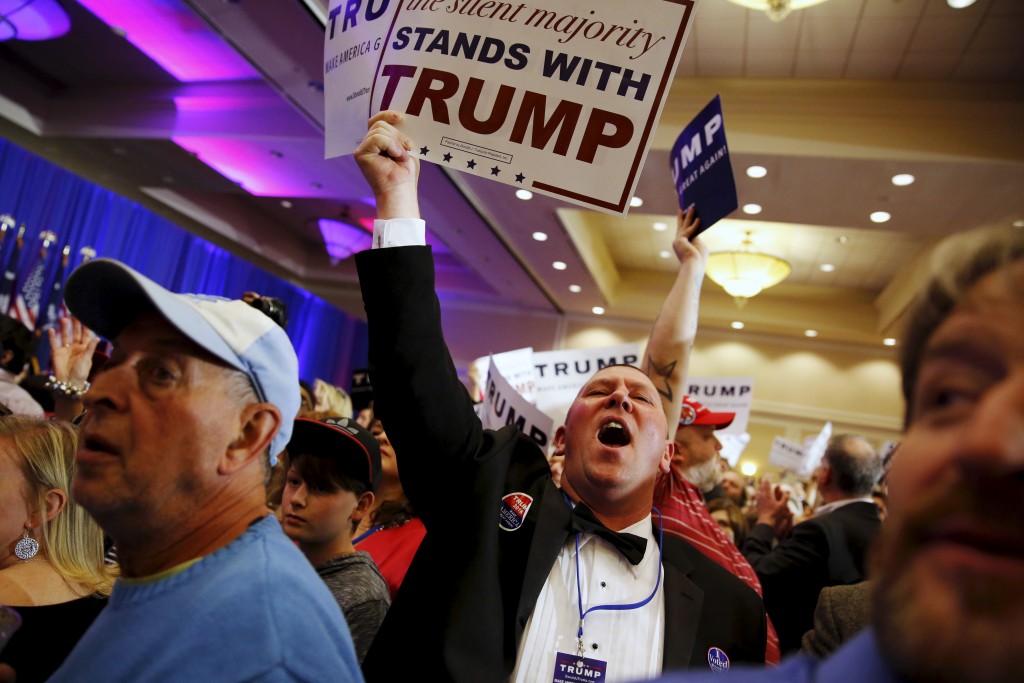 Supporters of U.S. Republican presidential candidate Donald Trump celebrate the close of the polls as they watch election results at a rally in Spartanburg, South Carolina February 20, 2016. Photo by Jonathan Ernst/Reuters

About three-quarters of Republican primary voters support a temporary ban on Muslims who are not U.S. citizens from entering the United States. Nearly 4 in 10 of those voters backed Trump, while a third who oppose such a ban preferred Rubio.

Trump won a majority of the delegates in the South Carolina primary — at least 38 of the 50 — and has a chance to win them all.

Trump leads the overall race for delegates with 55. Ted Cruz has 11 delegates, Marco Rubio has 10, John Kasich has five, Jeb Bush has 4 and Ben Carson has three.

It takes 1,237 delegates to win the Republican nomination for president.

While the real estate magnate scored a decisive win in New Hampshire, his second-place finish in Iowa to Cruz illustrated gaps in his less-than-robust ground operation, and questions remain about the extent to which he can translate leads in preference polls and large rally crowds into votes.

Trump’s win Saturday could answer some of those questions, adding momentum going into the collection of Southern states that will vote March 1.

The election followed days of hostility between the campaigns and their allies at events and in television ads, automatic calls and mailers.

At his final election-eve rally Friday night in North Charleston, Trump told the widely discredited story of Gen. John Pershing, who was said to have halted Muslim attacks in the Philippines in the early 1900s by shooting the rebels with bullets dipped in pigs’ blood.

The exit polling of voters was conducted for The Associated Press and the television networks by Edison Research.