Trump signed an executive order to keep the Guantanamo Bay prison open. Will anything change?

During his first State of the Union address, President Donald Trump announced that he had signed an executive order to keep the U.S. detention facility at Guantanamo Bay, Cuba, open.

America must “continue to have all necessary power to detain terrorists, wherever we chase them down, wherever we find them. And in many cases, for them, it will now be Guantanamo Bay,” Trump said.

But despite Trump’s high-profile announcement, experts said his executive order likely won’t have a big impact on the prison, which has been a flash point in the debate over national security and terrorism since George W. Bush’s presidency.

“This is more of a political bone thrown to his base rather than something that’s going to be a change in policy,” said John Bellinger III, a senior fellow at the Council on Foreign Relations.

What’s in the executive order?

Along with keeping Guantanamo Bay open, Trump’s executive order included a request for an interagency review of current U.S. policy on housing detainees who were captured in armed conflict.

The order also refers to the Authorization for Use of Military Force, known as the AUMF, that Congress passed in 2001. It allowed the U.S. to go after al-Qaida and “associated forces” who were deemed responsible for the 9/11 attacks, and detain members of terrorist groups at Guantanamo Bay.

Trump’s executive order listed the Islamic State of Iraq and Syria, known as ISIS, as an associated force under the status of forces agreement, opening the door to detain ISIS members at Guantanamo.

Some legal experts have argued that the U.S. does not have legal authority to hold an ISIS fighter in military detention because the original AUMF only applied to al-Qaida and the Taliban, and was written in the years before the rise of ISIS.

The order also revoked the executive order signed by former President Barack Obama on his second day in office, which called for shutting down the Guantanamo Bay prison. Obama had vowed as a candidate to close the prison but failed to deliver on the promise as president. Since taking office, Trump has made reversing Obama-era policies a top priority.

“As with everything else with what Obama did, Trump wants to reverse that signature Obama made nine years ago,” Bellinger said.

Obama’s executive order had called for the prison to close in a year, citing the large number of detainees who had been there for long periods of time. The Obama administration argued for years that many detainees were eligible for release or transfer into the U.S. court system.

How many people have been detained at Guantanamo?

Roughly 780 people have been detained at the prison since it opened in 2002. Today, 41 detainees remain housed at the facility. Of those, 26 are in indefinite detention and 10 are in active military commission cases. An additional five detainees have been cleared for transfer, including some who were cleared of any terrorist activity and have been awaiting their release for years.

The last detainees to leave Guantanamo were three men who were resettled to the United Arab Emirates on Jan. 19, 2017, in the final days of the Obama administration. Their release took place two weeks after then-President-Elect Trump tweeted that he was not planning on releasing any more detainees from the prison.

What happens to prisoners after they’re released

In his State of the Union address, Trump claimed incorrectly that “hundreds and hundreds” of detainees that were released from the prison would re-engage in terrorist related activities.

According to a report by the Director of National Intelligence, only 17 percent of the 728 detainees who have been transferred or repatriated from Guantanamo since the prison opened in 2002 have been “confirmed” of re-engaging in terrorist activity. The report found that the majority of the detainees who resumed terrorist activities after leaving the prison did so before the Obama administration established its detainee review policy in 2009. Of the 196 detainees the Obama administration transferred out of the prison, the DNI report found only 4 percent resumed terrorist activities. 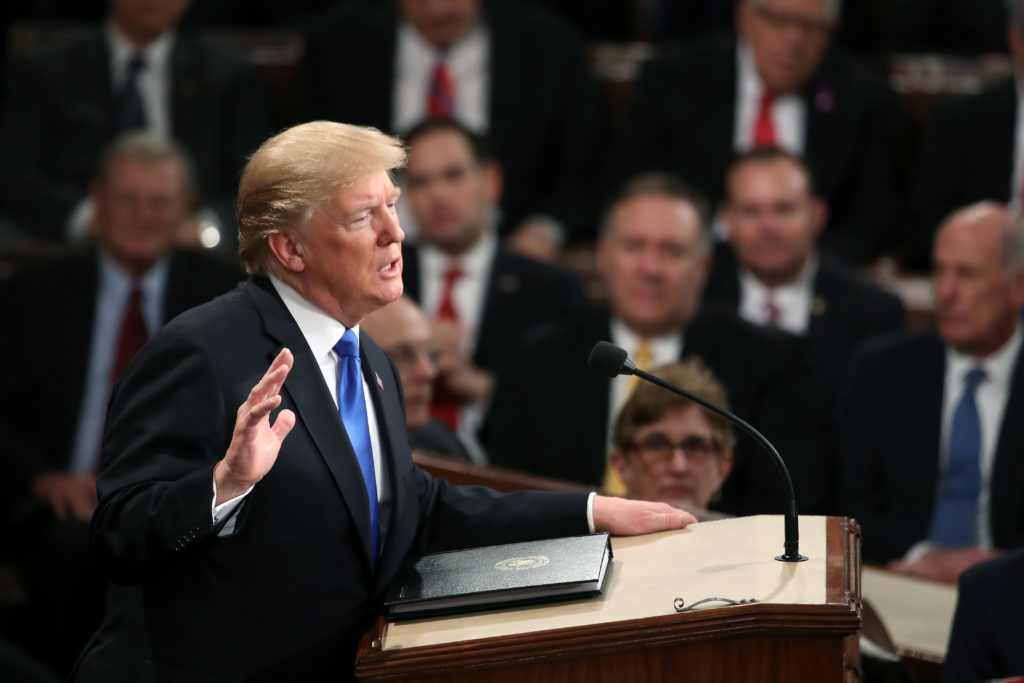 President Donald Trump announced his executive order on the Guantanamo Bay prison at his first State of the Union on Jan. 30, 2018. (Photo by Mark Wilson/Getty Images)

But those figures are up for debate, given the difficulties of tracking and confirming the activities of detainees after they’ve left the prison. The office of the Director National Intelligence, which oversees the government’s intelligence agencies, defines “confirmed” instances of former detainees returning to terrorist activity based on a “preponderance of information,” including biometric data and other intelligence reporting.

Getting placed on the list of “re-engaged” detainees only requires two sources for confirmation, according to J. Well Dixon of the Center for Constitutional Rights.

“Recidivism implies that someone did something wrong initially, that they committed some offense,” Dixon said. “That’s never been proven with almost all the men in Guantanamo.”

When the prison was established, the Bush administration argued that it was a vital tool in combating terrorism. The Guantanamo prison is “a necessary part of protecting the American people,” Bush said in 2006. But Dixon and other critics have also claimed that Guantanamo serves as a recruiting tool for terrorists.

On Tuesday, Trump cited former ISIS leader Abu Bakr al-Baghdadi as an example of someone who engaged in terrorist activity after being released from the prison, though reports have illustrated that Baghdadi’s time at a U.S. military camp Bucca along the Kuwait border may have deepened his extremism.

Has Trump sent anyone to Guantanamo?

The Trump administration has not yet sent anyone to the military prison. In fact, the U.S. hasn’t sent a new detainee to the prison since 2008. But Trump expressed interest in doing so after a deadly truck attack in New York City last year. When asked if he would send the suspect, Sayfullo Saipov, an Uzbek immigrant who has U.S. citizenship, to Guantanamo, Trump said, using the prison’s moniker, “I would certainly consider that, yes. Send him to Gitmo.”

But putting a U.S. citizen in military custody would almost certainly be met with significant legal push back, experts said. The move likely would require the citizen to be held as an enemy combatant, which would permit the individual not be read their Miranda rights and to be interrogated without a lawyer present, Bellinger said. “The Bush administration tried a couple times to send citizens into military custody and it didn’t work well for them,” Bellinger said.

Trump later walked back his statement on sending the New York truck attack suspect to Guantanamo.

It remains unlikely that the U.S. would send a captured ISIS suspect to the prison any time soon, Bellinger said, as the move would invite legal challenges. Mark Fallon, the author of “Unjustifiable Means” and a former chief investigator at the Defense Department’s Criminal Investigation Task Force, believes that sending anymore captured combatants to the prison would be reductive to the country’s national interests.

“Guantanamo is a symbol of torture and injustice around the world,” Fallon said. “When I see the President saying he’ll load up Guantanamo with more people [it’s] dangerous rhetoric that could only drive foreign fighters to the battlefield.”

The basis for the legal challenge to ISIS combatants being sent to Guantanamo lies with the current AUMF policy that was enacted before the creation of ISIS. But Alberto Mora of Human Rights First doesn’t think legal challenges would be fruitful.

Mora said he would be watching closely to see what comes out of the 90-day review Trump ordered of Guantanamo policy, which will be carried out under Secretary of Defense James Mattis.

“What I think Mattis and his team will find after that period is that our current detainee policy has failed,” Mora said.