“Beginning today the United States of America gets back control of its borders,” Trump declared during a visit to the Department of Homeland Security. “We are going to save lives on both sides of the border.”

Trump cast his actions as fulfillment of a campaign pledge to enact hard-line immigration measures, including construction of a wall paid for by Mexico. With the families of Americans killed by people living in the U.S. illegally sitting in the audience, Trump said, “When it comes to public safety, there is no place for politics.”

Trump cast his actions as fulfillment of a campaign pledge to enact hard-line immigration measures, including construction of a wall paid for by Mexico. With the families of Americans killed by people living in the U.S. illegally sitting in the audience, Trump said, “When it comes to public safety, there is no place for politics.”

Funding for the border wall project is murky. While Trump has repeatedly promised that Mexico will pay for it, U.S. taxpayers are expected to cover the initial costs and the new administration has said nothing about how it will compel Mexico to reimburse the money. One of the executive actions Trump signed Wednesday appears to signal that he could restrict aid to Mexico.

In an interview with ABC News earlier Wednesday, Trump said, “There will be a payment; it will be in a form, perhaps a complicated form.”

While Trump has repeatedly said the border structure will be a wall, his spokesman Sean Spicer said more generally Wednesday the president was ordering construction of a “large physical barrier.”

Mexican President Enrique Pena Nieto, who has insisted his country will not pay for a wall, is to meet with Trump at the White House next week.

The orders Trump signed Wednesday also increase the number of border patrol and Immigration and Customs Enforcement agents to be hired. And the president ordered the end of what Republicans have labeled a catch-and-release system at the border. Currently, some immigrants caught crossing the border illegally are released and given notices to report back to immigration officials at a later date. 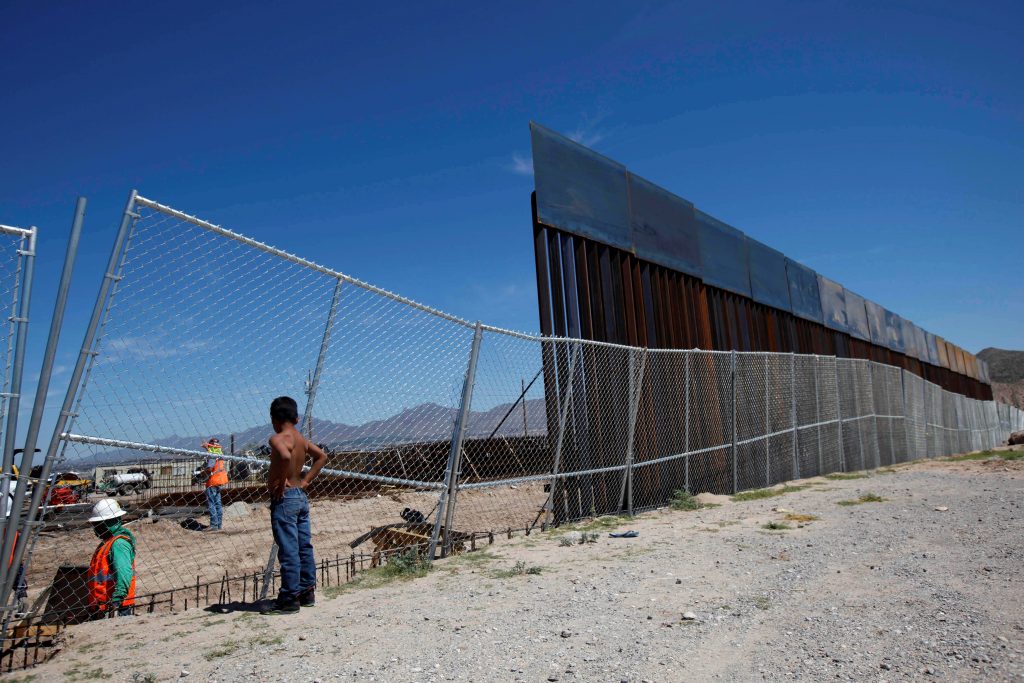 A boy looks as U.S. workers build a section of the U.S.-Mexico border wall at Sunland Park, U.S. opposite the Mexican border city of Ciudad Juarez, Mexico. Photo by Jose Luis Gonzalez/Reuters

Later in the week, Trump is expected to sign orders restricting the flow of refugees into the United States. His current proposal includes at least a four-month halt on all refugee admissions, as well as a temporary ban on people coming from some Muslim-majority countries, according to a source from a public policy organization that monitors refugee issues. The person was briefed on the details of that proposed action by a government official and outlined the plan to The Associated Press.

The public policy organization source insisted on anonymity in order to outline the plans ahead of the president’s official announcements.

Trump campaigned on pledges to tighten U.S. immigration policies, including strengthening border security and stemming the flow of refugees. His call for a border wall was among his most popular proposals with supporters, who often broke out in chants of “build that wall” during rallies.

In response to terrorism concerns, Trump controversially called for halting entry to the U.S. from Muslim countries. He later turned to a focus on “extreme vetting” for those coming from countries with terrorism ties.

To build the wall, the president may rely on a 2006 law that authorized several hundred miles of fencing along the 2,000-mile frontier. That bill led to the construction of about 700 miles of various kinds of fencing designed to block both vehicles and pedestrians.

The Secure Fence Act was signed by then-President George W. Bush, and the majority of that fencing in Texas, New Mexico, Arizona and California was built before he left office. The last remnants were completed after President Barack Obama took office in 2009.

The Trump administration also must adhere to a decades-old border treaty with Mexico that limits where and how structures can be built. The 1970 treaty requires that structures cannot disrupt the flow of the rivers, which define the U.S.-Mexico border along Texas and 24 miles in Arizona, according to The International Boundary and Water Commission, a joint U.S.-Mexican agency that administers the treaty.

Trump’s order to crack down on sanctuary cities — locales that don’t cooperate with immigration authorities — could cost individual jurisdictions millions of dollars. But the administration may face legal challenges, given that some federal courts have found that local jurisdictions cannot hold immigrants beyond their jail term or deny them bond based only a request from immigration authorities.

"I guess those mayors (of sanctuary cities) will have to find money somewhere else" other than the federal government, @KellyannePolls says pic.twitter.com/uCAivebla5

It appeared as though the refugee restrictions were still being finalized. The person briefed on the proposals said they included a ban on entry to the U.S. for at least 30 days from countries including Iran, Iraq, Libya, Somalia, Sudan and Yemen, though the person cautioned the details could still change.

There is also likely to be an exception for those fleeing religious persecution if their religion is a minority in their country. That exception could cover Christians fleeing Muslim-majority nations.

As president, Trump can use an executive order to halt refugee processing. Bush used that same power in the immediate aftermath of the Sept. 11 attacks. Refugee security vetting was reviewed and the process was restarted several months later.

Zoll reported from New York. AP writer Alicia A. Caldwell in Washington contributed to this report.