WASHINGTON — President Donald Trump signed an order Thursday that paves the way for imposing tariffs on as much as $60 billion worth of Chinese imports to punish Beijing for what he said is the theft of American technology and Chinese pressure on U.S. companies to hand it over.

“It is the largest deficit of any country in the history of our world,” Trump said of the U.S.-China trade imbalance, blaming it for lost American jobs.

He said his action would make the country stronger and richer.

China has already warned that it will take “all necessary measures” to defend itself, raising the prospect of a trade war between the world’s two biggest economies.

The White House said Thursday that Trump would direct the Office of the U.S. Trade Representative to publish a list of proposed tariffs for public comment within 15 days. USTR has already identified potential targets: 1,300 product lines worth about $48 billion. The president is also asking Treasury Secretary Steven Mnuchin to come up with a list of restrictions on Chinese investment.

Financial markets skidded Thursday on the risk of growing commercial conflict between the U.S. and China and the possibility that China will impose retaliatory tariffs on U.S. products. Dozens of industry groups sent a letter last weekend to Trump warning that “the imposition of sweeping tariffs would trigger a chain reaction of negative consequences for the U.S. economy, provoking retaliation; stifling U.S. agriculture, goods, and services exports, and raising costs for businesses and consumers.”

The administration moves on Thursday mark the end of a seven-month U.S. investigation into the hardball tactics China has used to challenge U.S. supremacy in technology, including, the U.S. says, dispatching hackers to steal commercial secrets and demanding that U.S. companies hand over trade secrets in exchange for access to the Chinese market. The administration argues that years of negotiations with China have failed to produce results.

“It could be a watershed moment,” said Stephen Ezell, vice president of global innovation policy at the Information Technology & Innovation Foundation, a think tank. “The Trump administration’s decision to go down this path is illustrative that previous strategies have not borne the hoped-for fruit.”

Business groups mostly agree that something needs to be done about China’s aggressive push in technology — but they worry that China will retaliate by targeting U.S. exports of aircraft, soybeans and other products and start a tit-for-tat trade war of escalating sanctions between the world’s two biggest economies.

“The sanctions are a very big deal,” says Mary Lovely, a Syracuse University economist and senior fellow at the Peterson Institute for International Economics. “The Chinese see them as a major threat and do not want a costly trade war.”

Chinese officials warned of potential retaliation and expressed hopes that the U.S. would avoid taking actions that would hurt both countries. 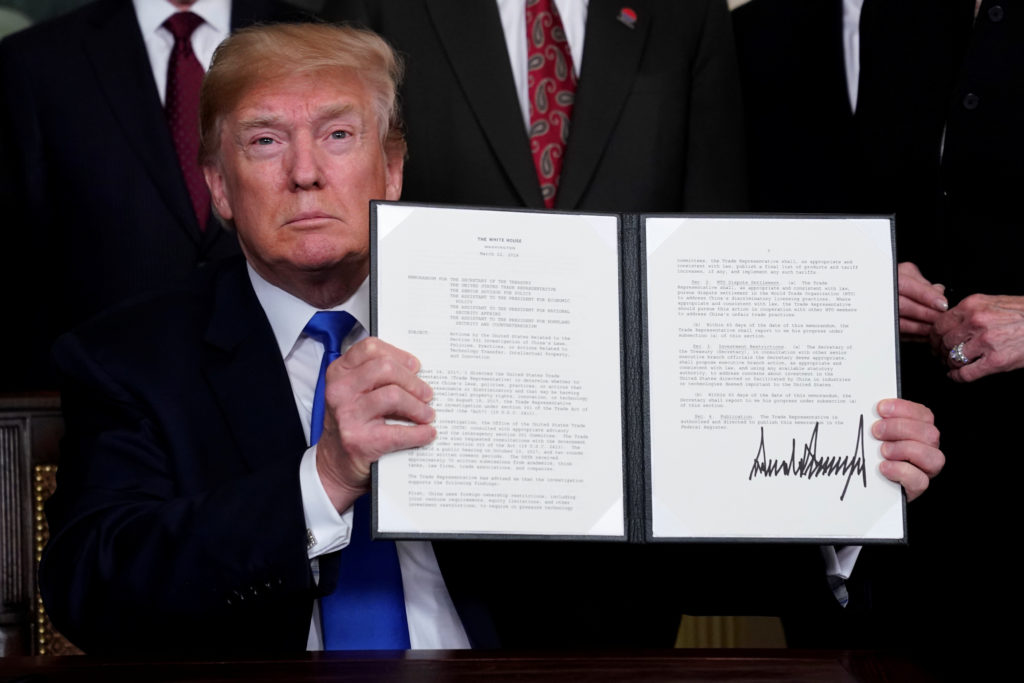 The move against China comes just as the United States prepares to impose tariffs of 25 percent on imported steel and 10 percent on aluminum — sanctions that are meant to hit China for flooding the world with cheap steel and aluminum but will likely fall hardest on U.S. allies like South Korea and Brazil because they ship more of the metals to the United States.

Trump campaigned on promises to bring down America’s massive trade deficit — $566 billion last year — by rewriting trade agreements and cracking down on what he called abusive commercial practices by U.S. trading partners. But he was slow to turn rhetoric to action. In January, he imposed tariffs on imported solar panels and washing machines. Then he unveiled the steel and aluminum tariffs, saying reliance on imported metals jeopardizes U.S. national security.

To target China, Trump has dusted off a Cold War weapon for trade disputes: Section 301 of the U.S. Trade Act of 1974, which lets the president unilaterally impose tariffs. It was meant for a world in which large swaths of global commerce were not covered by trade agreements. With the arrival in 1995 of the World Trade Organization, which polices global trade, Section 301 fell largely into disuse.

At first it looked like Trump and Chinese President Xi Jinping were going to get along fine. They enjoyed an amiable summit nearly a year ago at Trump’s Mar-a-Lago resort in Florida. But America’s longstanding complaints about Chinese economic practices continued to simmer, and it became more and more apparent that the U.S. investigation into China’s technology policies was going to end in trade sanctions.

Chinese Premier Li Keqiang this week urged Washington to act “rationally” and promised to open China up to more foreign products and investment. “China has been trying to cool things down for weeks. They have offered concessions,” Lovely says. “Nothing seems to cool the fire. I fear they will take a hard line now that their efforts have been rebuffed. … China cannot appear subservient to the U.S.”

Left: U.S. President Donald Trump, surrounded by business leaders and administration officials, prepares to sign a memorandum on intellectual property tariffs on high-tech goods from China, at the White House in Washington, D.C., on March 22, 2018. Photo by Jonathan Ernst/Reuters