WASHINGTON — President Donald Trump skipped town for the weekend, but that didn’t stop demonstrators from making him the focus of competing rallies in the nation’s capital that highlighted the stark political divisions in the United States.

Kicking off a Saturday of diverse demonstrations, about two dozen protesters gathered in Lafayette Square, a park just across Pennsylvania Avenue from the White House, to demand that Trump take strong action against Russian leader Vladimir Putin in retaliation for Moscow’s interference in the 2016 U.S. election.

They carried signs that said “We’re not PUTIN up with it!” and “Protect American Democracy.” After their rally, marchers headed to the home of the Russian ambassador a few blocks away.

Nearby, on the National Mall close to the Washington Monument, a larger pro-Trump event got underway. Organizers, on the event’s website, appealed for people to “help send a message to Congress, the media & the world” that “we stand united to defend American culture & values.”

The pitch to would-be participants: “If you stand for patriotism and freedom, this rally is for you!” 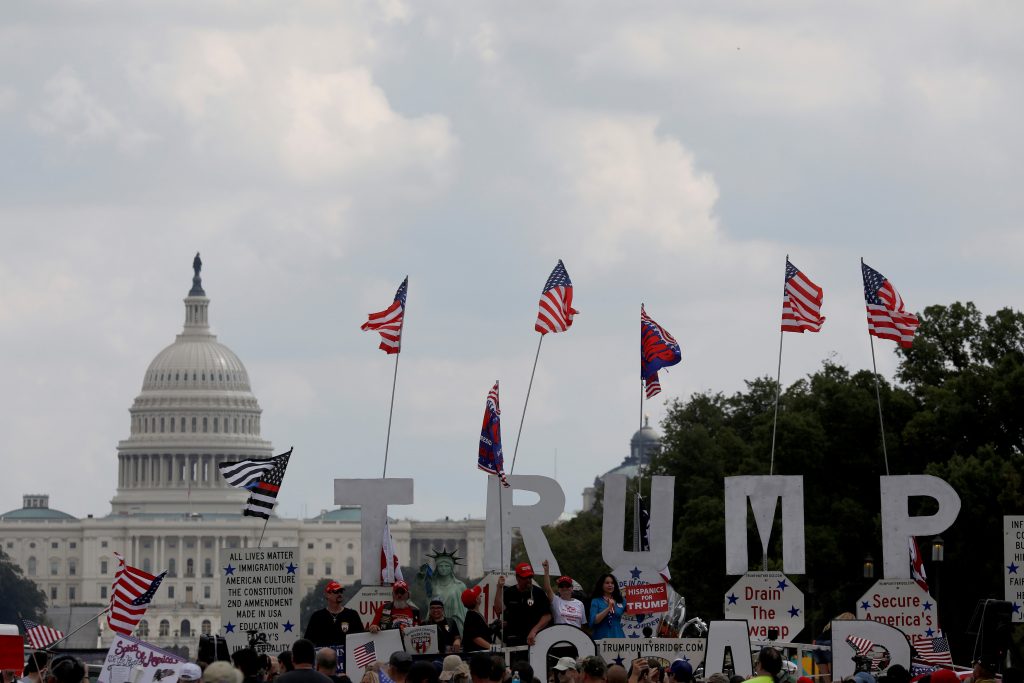 Activists gather on the Trump Unity Bridge during the Mother of All Rallies demonstration promoting the “protection for traditional American values and an America First agenda” on the National Mall in Washington, U.S., September 16, 2017. Photo by Aaron P. Bernstein/Reuters

Trump was spending the weekend at his golf club in New Jersey before attending the U.N. General Assembly next week.

Later, in front of the Lincoln Memorial, thousands of juggalos, as supporters of the rap group Insane Clown Posse are known, readied for a concert and rally. They intended to push their demand that the FBI rescind its classification of juggalos as a “loosely organized hybrid gang.”

The rap duo has developed an intensely devoted fan base over the course of a 25-year career.

A 2011 report by the Justice Department’s Gang Task Force placed the juggalos, who favor extensive tattoos and outlandish face paint, in the same classification as overtly violent gangs such as the Bloods and the Crips.

The rap group and its fans claim to be a nonviolent community subject to largely class-based discrimination by law enforcement. The band, along with the ACLU, sued the FBI in 2014 seeking to change the classification but with little success so far.

Left: Pro and anti-Trump demonstrators debate during the Mother of All Rallies demonstration on the National Mall in Washington, D.C., on Sept. 16, 2017. Photo by Aaron P. Bernstein/Reuters