WASHINGTON — President Donald Trump is in the final stretch of a 44-city blitz for the midterm elections, but the America he’s glimpsed from the airport arrivals and his armored limousine is hardly a reflection of the nation as a whole.

The president has mostly traveled to counties that are whiter, less educated and have lower incomes than the rest of the United States, according to Census Bureau data. It’s a sign that he is seeking to galvanize the same group of voters that helped carry him to victory in 2016.

Trump has largely eschewed the big metropolises for smaller cities. He has been to Tampa, Nashville, Cleveland and Houston — where the arenas could accommodate his crowds. But he’s primarily been jet-setting to smaller places such as Elko, Nevada (population 20,078). Or, Mosinee, Wisconsin (population 4,023). Or, Belgrade, Montana (population 7,874). 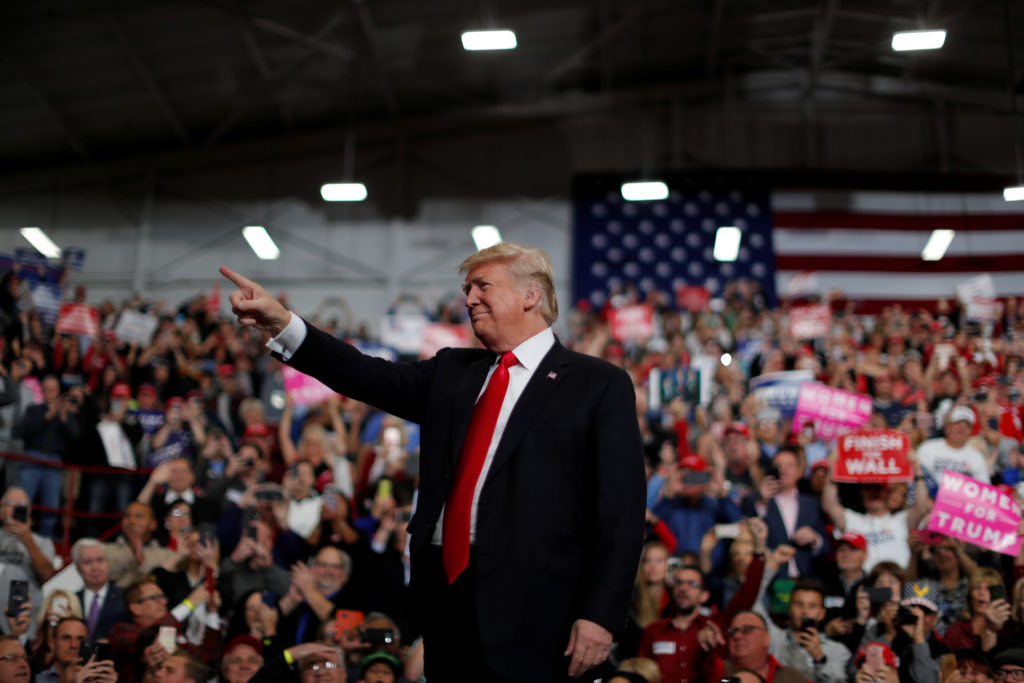 When Trump stops at Belgrade on Saturday, historical records suggest he will be the second president to visit the Montana town named after Serbia’s capital city. In 2009, Barack Obama held a town hall in Belgrade to promote the Affordable Care Act.

Since March, Trump has crisscrossed the country like a salesman with a set territory. The majority of his trips have been to just nine states. They are Ohio, Pennsylvania, Tennessee, Florida, Missouri, Montana, Indiana, West Virginia and Nevada.

Trump won eight of those states in 2016, but not Nevada. And this year, seven of them feature a major Senate race with a Democratic incumbent. The former casino magnate has visited one city twice for the midterms: Las Vegas.

Here is a portrait of the America that the president is seeing:

Trump has journeyed to counties where it’s slightly more of a struggle to reach and stay in the middle class.

Out of his scheduled rallies, 74 percent are in counties with median incomes that fall below the national level. But he’s brought tidings of a 49-year low unemployment rate and accelerated economic growth to places that mostly lag the median U.S. household income of $55,032.

In September, Trump went to Wheeling, West Virginia. The typical household income in the county surrounding Wheeling is $41,986, or about $13,000 below the national level. The metro area has lost 818 jobs in the 12 months that ended in August, according to the Bureau of Labor Statistics. And for West Virginia, coal mine jobs have declined this year after a hiring bump in 2017.

READ NEXT: Achieving the American Dream may depend on where you live

“Your state is booming like never before,” Trump told the crowd in Wheeling. “And our great coal miners are back to work.”

Trump has visited a few affluent counties. He stopped by Rochester, Minnesota, where incomes are high because of the presence of the world-renowned Mayo Clinic. And during a special congressional election in August, the president campaigned in Delaware County, Ohio, where the median household income of $94,234 is just shy of being double the national average.

Just 18.1 percent of the adults in Elko County, Nevada hold a college degree. That’s compared to 30.3 percent nationwide. Of the 43 places Trump is visiting, 28 have a below-average share of college graduates.

Elko’s economy is unique because it relies on mining gold, instead of the office and health care jobs that often require a college diploma. The county has five active gold mines, according to the Nevada Commission on Mineral Resources. This makes it something of an outlier in country where mining metal ore accounts for 0.03 percent of all jobs.

Trump went to Elko in part to help push for the re-election of Republican Sen. Dean Heller, who is in a tight race against Democratic Rep. Jacky Rosen. Heller flattered the president — and provided the lone reference to the local economy — by telling him, “I think everything you touch turns to gold.”

When Trump has gone to more educated counties, it’s often because they have a major college campus and venues where people can gather. Missoula is home to the University of Montana and 41.8 percent of its adults are college graduates. The University of Missouri is in Columbia, where 46.8 percent of adults hold college degrees.

Other than his rallies at big cities, Trump has generally been in communities that are overwhelmingly white. The U.S. population is 73.3 percent white, but almost three-fourths of the places where the president has stumped for midterms are above that average.

In the county surrounding Council Bluffs, Iowa, 88.7 percent of the population is non-Hispanic whites. Trump told the crowd at his rally that Democrats would allow Central American gangs such as MS-13 to immigrate freely into the United States, a claim disputed by Democratic lawmakers.

“They want to turn America, these Democrats — and that’s what they want — into a giant sanctuary for criminal aliens and the MS-13 killers,” Trump said.

The biggest outlier in Trump’s schedule may be his rally Sunday in Macon, Georgia. Its county is 53.9 percent black, making it the lone place being visited by the president where minorities make up the majority of the population.

Trump is going there to promote the gubernatorial candidacy of Republican Brian Kemp. He is running against Democrat Stacey Abrams, who is trying to become the first black female governor in U.S. history.