Trump vows to ‘open up the water’ in drought-stricken California

FRESNO, Calif. — Presumptive Republican presidential nominee Donald Trump told California voters Friday that he can solve their water crisis, declaring that: “There is no drought.”

Speaking at a rally in Fresno, Calif., Trump accused state officials of denying water to Central Valley farmers so they can send it out to sea “to protect a certain kind of three-inch fish.”

“We’re going to solve your water problem. You have a water problem that is so insane. It is so ridiculous where they’re taking the water and shoving it out to sea,” Trump said to cheers at a rally that drew thousands.

Trump said he spent 30 minutes before the rally meeting with more than 50 farmers who complained to him about their struggles.

“They don’t understand — nobody understands it,” he said, adding that, “There is no drought.”

Trump appeared to be referring to water that runs naturally from the Sacramento River to the San Francisco Bay and then to the ocean. Some farmers want more of that flow captured and diverted to them. The three-inch Delta smelt is a native California fish on the brink of extinction. The smelt has become an emblem in the state’s battles over environmental laws and water distribution. 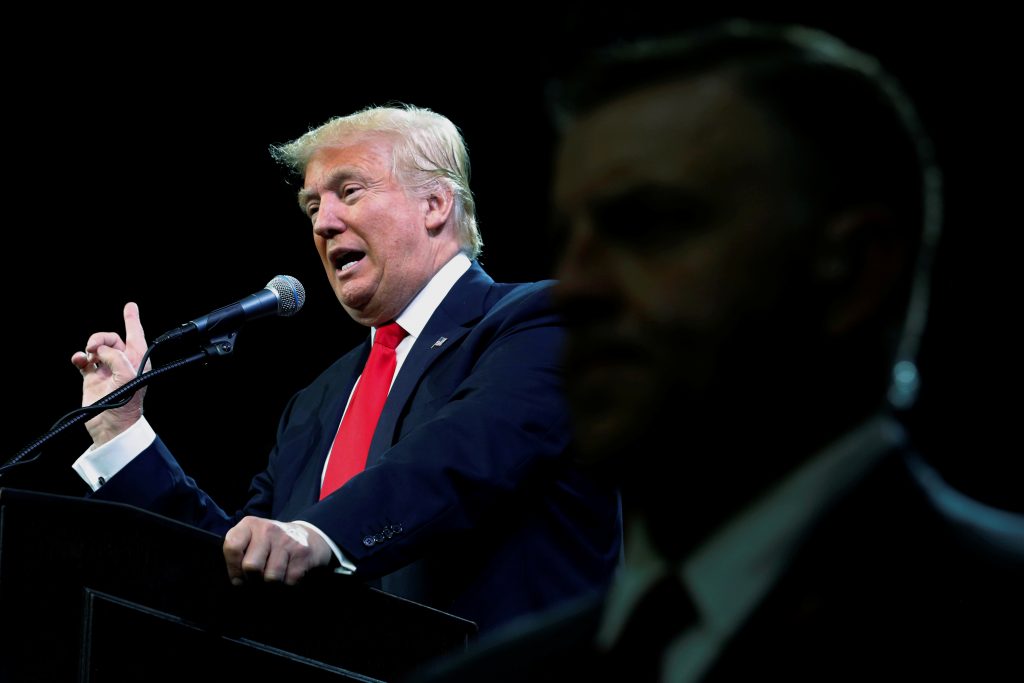 Politically influential rural water districts and well-off corporate farmers in and around California’s Central Valley have been pushing back against longstanding federal laws protecting endangered fish and other species, saying federal efforts to make sure endangered native fish have enough water is short-changing farmers of the water they want and need for crops.

Water authorities say they can’t do it because of the water rights of those upstream of the farmers, and because of the minimum-water allowances needed by endangered species in the bay and by wildlife in general.

The farm lobby, a heavyweight player in California’s water wars, also is seeking federal and state approval for billions of dollars in new water tunnels, dams, water distribution plans, and other projects.

Trump says that, “If I win, believe me, we’re going to start opening up the water so that you can have your farmers survive.” California is the country’s No. 1 agriculture producer. The state’s five-year drought is raising the stakes in water disputes among farmers, cities and towns, and environmental interests. California last year marked the driest four-year period in its history, with record low rainfall and snow.

Trump’s appearance drew several hundred protesters who marched around the arena where he was speaking.

Trump is also scheduled to appear Friday at a rally in San Diego, where police are also taking precautions to prevent the kind of violence that has occurred at previous protests against the billionaire businessman-turned-politician.

A count by The Associated Press found Thursday that Trump has reached the required number of delegates to officially clinch the Republican nomination.