Trump’s cabinet could change the face of U.S. energy policy

President Obama surrounded himself with officials who backed his energy and climate agenda. Under his tenure, the departments of the Interior, Energy, State and the Environmental Protection Agency pushed plans to grow wind and solar power, reduce the nation’s dependence on foreign oil and fight climate change.

All of that is about to change. President-elect Donald Trump’s nominees to lead energy and climate-related agencies like EPA hold views that could not be more different from the Obama administration.

The contrasts between Obama and Trump’s energy and environment teams are stark. It’s still too early to know what policies Trump’s cabinet picks would support if they get confirmed by the Senate. But they have histories of public statements that make clear where they stand.

Here’s a guide to the things Trump’s cabinet picks have said on issues from natural gas fracking to wind energy to climate change science. 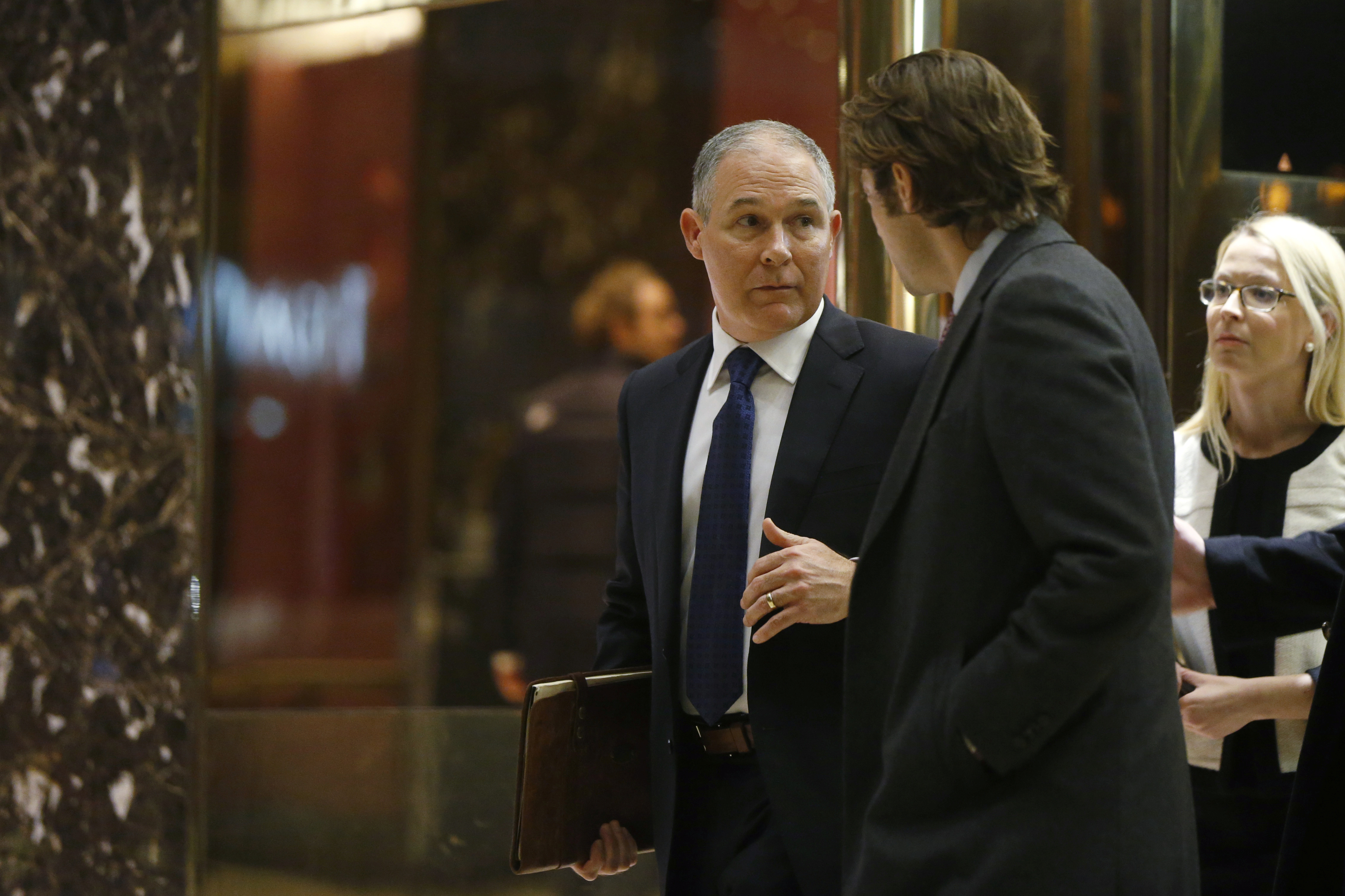 As Oklahoma’s attorney general, Pruitt joined other state attorneys general in suing the Obama administration over the Clean Power Plan, a federal rule aimed at curbing carbon emissions from power plants (which produce a third of the country’s emissions, more than any other source). Pruitt also joined a lawsuit to block an EPA rule on methane emissions, and has devoted his tenure in office to fighting the agency.

“Scientists continue to disagree about the degree and extent of global warming.”

“Scientists continue to disagree about the degree and extent of global warming and its connection to the actions of mankind. That debate should be encouraged — in classrooms, public forums, and the halls of Congress,” Pruitt wrote.

Last June, Pruitt retweeted a story with the headline: “GOP AGs warn Dems that if climate skeptics can be prosecuted for ‘fraud,’ so can alarmists.”

Pruitt slammed EPA regulations in his statement accepting the nomination earlier this month.

“The American people are tired of seeing billions of dollars drained from our economy due to unnecessary EPA regulations, and I intend to run this agency in a way that fosters both responsible protection of the environment and freedom for American businesses,” Pruitt said. 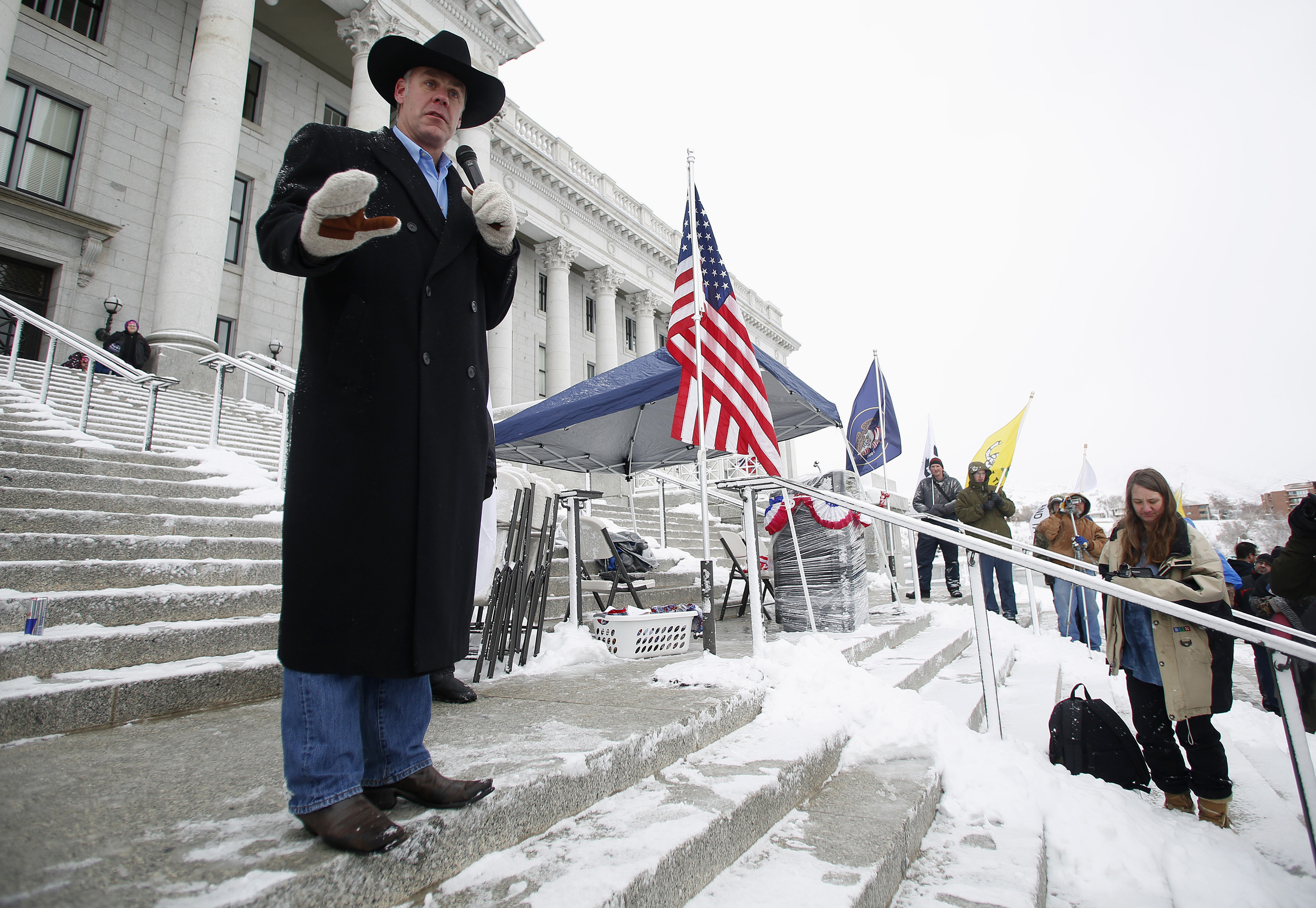 Rep. Ryan Zinke would be the next in a long line of Interior secretaries from Western states. Photo by Jim Urquhart/Reuters

Freshman Rep. Ryan Zinke, Trump’s pick to lead the Interior Department — which oversees oil and gas development on public lands — has a mixed record of public comments on energy and climate change.

In a 2014 debate during his failed bid for lieutenant governor of Montana, Zinke, who was elected to Congress last year, cast doubt on the evidence that climate change is real and driven by human activity.

“It’s not a hoax, but it’s not proven science either,” Zinke said. “But you don’t dismantle America’s power and energy on a maybe. We need to be energy independent first. We need to do it better, which we can, but it is not a settled science.”

In Congress, Zinke has backed the Land and Water Conservation Fund, a federal program that protects public lands and water. But he received a score of three percent — out of 100 — from the League of Conservation Voters for his voting record on environmentally-friendly legislation.

Last July, Zinke resigned as a delegate to the Republican National Convention after the GOP’s platform called for the transfer of federal lands to the states. (Despite the move, Zinke did speak at the RNC). “Most Republicans don’t agree with it and most Montanans don’t agree with it,” Zinke said at the time about giving states control over federal lands. “What we do agree on is better management.”

Accepting the Interior nomination this week, Zinke said he would “work tirelessly to ensure our public lands are managed and preserved in a way that benefits everyone for generations to come.” 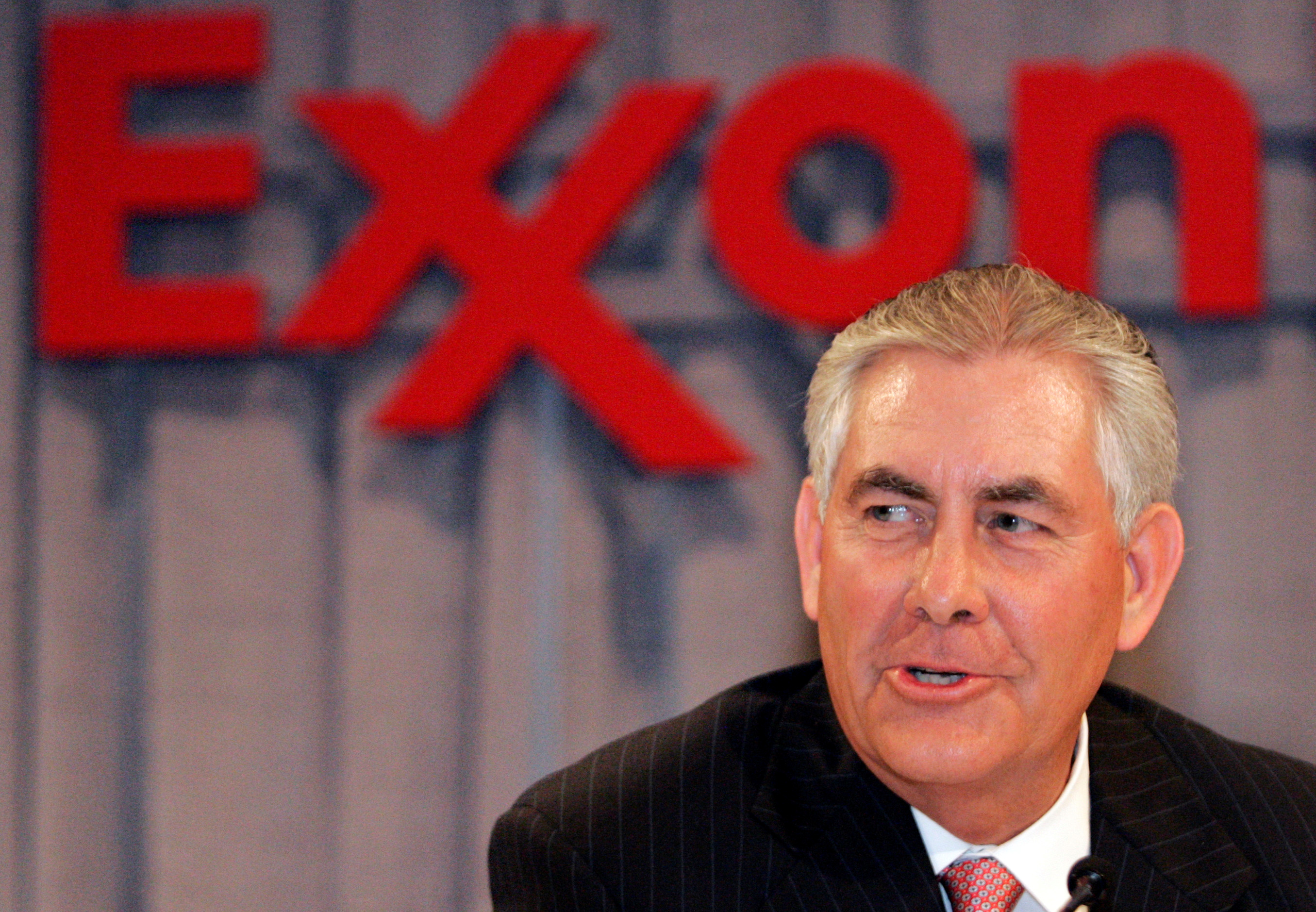 As Secretary of State, Tillerson would be a key player in international climate negotiations and some domestic energy projects, such as cross-border oil and gas pipelines.

In a keynote speech at an energy conference earlier this year, Tillerson said the “risks of climate change are real and warrant serious action.”

The “risks of climate change are real and warrant serious action.”

Last month, ExxonMobil came out in support of the Paris climate agreement, an ambitious deal to curb global greenhouse gas emissions reached by 195 countries. “ExxonMobil supports the work of the Paris signatories, acknowledges the ambitious goals of this agreement and believes the company has a constructive role to play in developing solutions,” the company said in a statement.

But the statement came as ExxonMobil faces a lawsuit from the attorneys general of New York and Massachusetts claiming the company hid and deceived investors over decades about the dangers of climate change.

Tillerson has also said he supports the Keystone XL Pipeline, a project critics say symbolizes the fossil fuel industry’s refusal to act on climate change. If he gets confirmed, Tillerson would replace John Kerry, a Keystone foe who has spent decades working on climate change action.

Since Tillerson took over the world’s leading energy company in 2006, Exxon Mobil’s political action committee has donated more than $7 million to Republican candidates, many of them outspoken climate change skeptics who support industry-friendly bills in Congress. 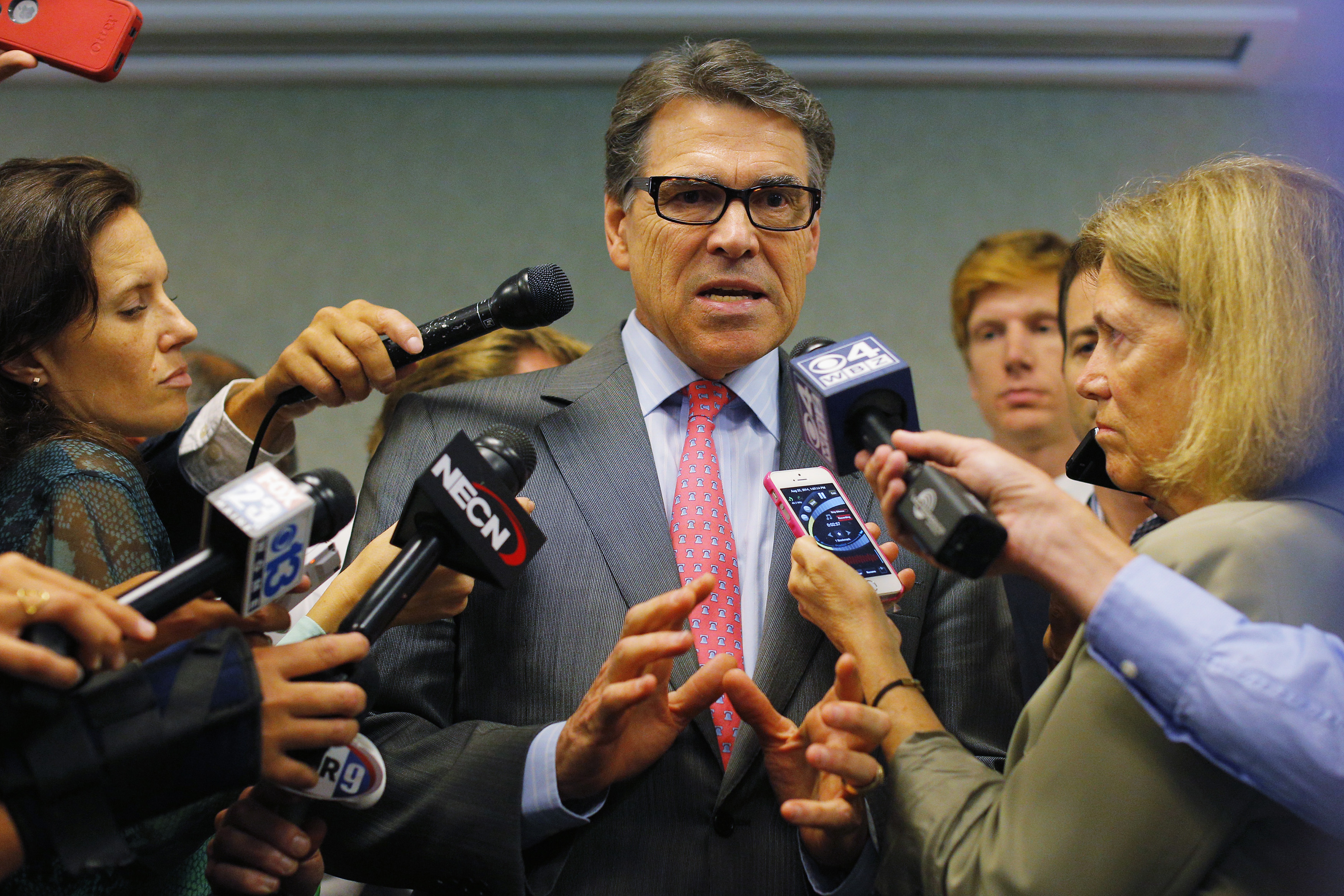 At a presidential debate in 2012, Rick Perry forgot to name the Energy Department on a list of agencies he wanted to eliminate. Photo by Brian Snyder/Reuters

During his tenure as governor of Texas from 2000 to 2015, Perry oversaw an expansion of oil and gas development. But under Perry the Lone Star State also became the country’s leading wind power developer — a point Trump transition officials noted when Perry was nominated for Energy Secretary earlier this week.

While Perry’s energy record is complex, his position on climate change is unambiguous. Perry — who ran for president in 2012 and again in 2016 — has consistently questioned the existence of climate change. At a 2011 event in New Hampshire, Perry said the climate has been in flux “ever since the earth was formed.”

“There are a substantial number of scientists who have manipulated data so that they will have dollars rolling into their projects,” Perry said. Other examples of Perry’s climate skepticism abound.

Perry’s main task at the Energy Department would be overseeing the county’s nuclear weapons, storage and scientific research programs. But Perry would have a hand in energy policy as well; under Obama, the department has backed renewable energy development and other initiatives to reduce domestic emissions.

And of course if Perry is confirmed, he would take over an agency he vowed to eliminate during a disastrous 2012 debate performance that sunk his presidential ambitions. Perry said he would cut three federal agencies. He listed Commerce and Education, but couldn’t remember Energy.