What could Trump’s election commission do with voter data?

The Presidential Advisory Commission on Election Integrity met for the first time Wednesday, as President Donald Trump again pushed his unfounded claim that widespread voter fraud took place in the 2016 election. The voter fraud commission’s first formal meeting came three weeks after Kansas Secretary of State Kris Kobach — one of the panel’s vice chairmen, along with Vice President Mike Pence — penned a letter to all 50 states requesting that they turn over key voter information.

So far, at least 24 states have said they’ll comply with the request, though there is no evidence of Mr. Trump’s claims that “millions” of people voted illegally last year and cost him the popular vote. Seventeen states and the District of Columbia have refused to comply with the request, which sparked a flurry of lawsuits from groups like the American Civil Liberties Union. At the meeting Wednesday, Trump suggested that the states that haven’t complied have something to hide. “What are they worried about? There’s something. There always is,” Trump said.

As more states and advocacy groups wade into the debate, here is a closer look at the commission, how voter records are collected and stored across the country, and how the White House could potentially use the data to its advantage.

Is there evidence of widespread vote fraud?

When Trump issued an executive order establishing the commission in May, it came with a mandate to investigate “improper and fraudulent” voter registration and voting.

Trump lost the national popular vote to Hillary Clinton by 2.8 million votes, and in the months since the election he has repeatedly claimed that undocumented immigrants and others voted illegally to tip the popular vote in Clinton’s favor.

But most election experts agree that voter fraud is so rare in the United States that it doesn’t impact electoral outcomes at the state or federal level. “As attorney general of Arizona for eight years, I uncovered only one or two isolated instances of voter fraud, virtually none in the overall context,” Terry Goddard, a former attorney general of Arizona, said in an interview.

Indeed, a review of the 2016 presidential election found just four cases of documented voter fraud out of more than 134 million ballots cast.

Every state is required to make public some voter data. The Help America Vote Act of 2002 required states to produce a list of registered voters, known as a voter file, with a minimum set of data points on each voter, such as the voter’s name, address and voting history. An individual’s voting history typically consists of a list of the elections in which they voted, and often specifies the party primary, but does not divulge specific ballot choices.

No state designates full or partial Social Security numbers as part of the public record, and no state has agreed to provide that data to the commission. The commission requested the full names, addresses, birth dates, political affiliations and voting histories of every registered voter in the country.

Rules about who may retrieve and use the data also varies from state to state. Generally, the information is not permitted to be used for commercial purposes or allowed to be republished online.

Some states, such as North Carolina and Ohio, allow anyone to access voter files on their state election websites. Others, like Virginia and New Hampshire, only allow data to be accessed by political candidates and political action committees.

Fees for data requests also vary widely. In Pennsylvania, voter roll information can be purchased by anyone for $20, while South Dakota charges $2,500 and Wisconsin charges $12,500. In Minnesota, voter information can be purchased for $46 and is available to the state’s registered voters for political and election-related purposes, as well as to law enforcement officials. 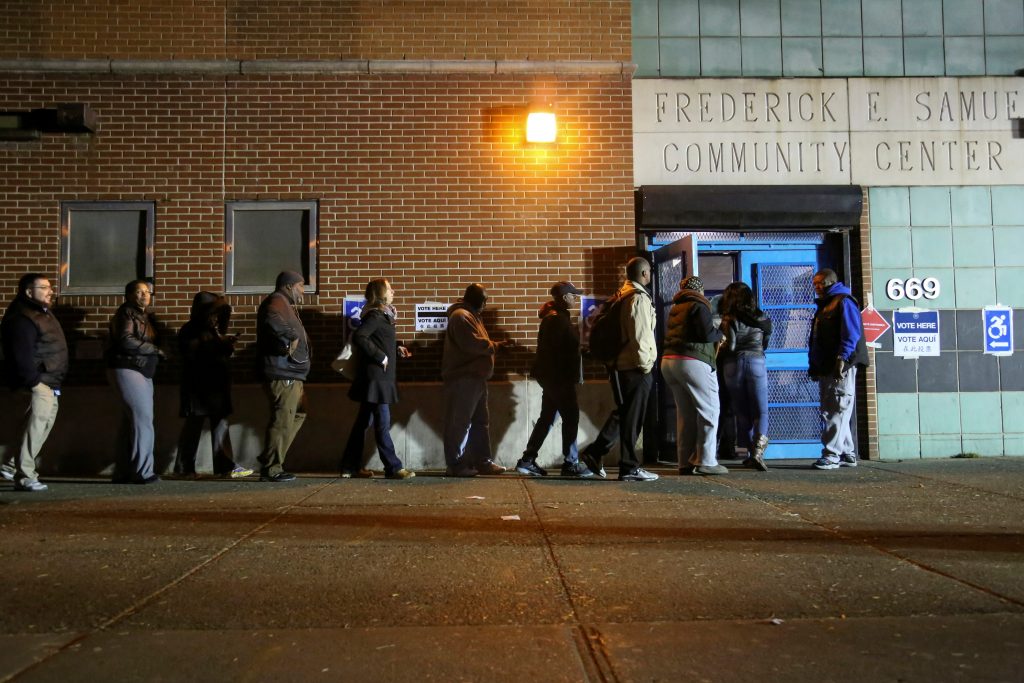 Voters line up to cast their ballot on election day at a polling station in Harlem, New York, on November 8, 2016. Photo by REUTERS/Bria Webb

Should the U.S. have a centralized voter database?

Currently, the country’s voter roll information system is highly decentralized, as every state and the District of Columbia maintain their own registered voter database. The voter fraud commission’s data request underscored a debate about whether it makes more sense for the U.S. to have a single, centralized system.

But critics of the idea have argued that a consolidated database could be more vulnerable to hacking than 51 separate databases. The issue is in the spotlight now as federal and congressional investigators examine Russia’s meddling in the 2016 election. Last month, Bloomberg reported that Russian hackers infiltrated the voting systems of 39 states in the 2016 election, a larger number than was previously reported.

“There are some good reasons to have a federal monetary system. There are some good reasons to have federal regulation of telecommunications,” said Goddard, the former Arizona attorney general. But until the voter fraud commission “comes up with some evidence [supporting voter fraud], why should our country spend billions of dollars and go to a huge effort to make a change that we don’t need to make?”

Spencer Scharff, the chief voter protection attorney for the Arizona Democratic Party during the 2016 election cycle, said that a centralized voter database would be advantageous only if it made voter registration and voting more accessible.

“We should be working to make registering to vote and the voting process easier,” Scharff said.“That’s how democracy should work. Unfortunately, I do not think that is the commission’s goal.”

Many secretaries of state have cited concerns about voter suppression as one of their main reasons for opposing the commission’s request. The American Civil Liberties Union has already filed four suits against Kobach over a Kansas law he supported, the Secure and Fair Elections Act, and has won every case.

Voting rights advocates — including Jason Kander, the founder of Let America Vote and a Democratic U.S. senate candidate in Missouri in 2016 — have also voiced concern that some of the information that states might submit (even if it is already publicly available in those states) could be used to suppress certain people from voting.

If the Trump administration were to create a publicly accessible federal voter database containing that information, states, candidates and political action committees could potentially use the information to target particular demographic groups, Goddard said.

“If voter fraud is their rationale and no fraud exists, then the new ‘voter protection’ obstacles they want will put us back in the same thicket that the courts encountered in the fifties when there were reading tests and Constitutional exams to keep blacks from voting in the South,” he said.

In addition to concerns about targeted voter suppression, voters’ anxiety about identifying information becoming public has led to a boom of recent requests from individuals seeking to cancel their voter registration. For example, 3,394 Coloradoans cancelled their registration between June 28 and July 13.

Another complaint in the salvo of lawsuits, this one by the Electronic Privacy Information Center, claims the commission violated the E-Government Act of 2002, which required that federal agencies establish adequate data protections before collecting personal information.

The commission’s request has also raised constitutional questions concerning the federal government’s right to collect voter information from the states. Under the Tenth Amendment, states have the right to control their own electoral processes.

“It’s ironic that Kobach in particular and many others who are now calling for database consolidation were states’ rights advocates in the last decade, saying any federalization would be an infringement on the states’ rights to control their elections,” Goddard said. “Now, they’re taking the opposite position.”