Who could replace John Bolton as Trump’s national security adviser?

John Bolton’s ouster as national security adviser created a vacancy for one of the hardest positions to fill in Washington: a loyal counselor who shares President Donald Trump’s unconventional worldview, but also has the professional stature to implement an agenda that’s anathema to many in the foreign policy establishment.

Bolton, a former U.S. ambassador to the United Nations, lasted longer than his two predecessors. But his departure raised fresh questions about whether anyone has the unique blend of skills to succeed in the job under Trump — and whether any seasoned foreign policy hands even want to try.

The conflicting qualifications for the job became clear after Trump’s election in 2016, when he tapped retired Lt. Gen. Michael Flynn to help carry out campaign promises to challenge the status quo within NATO, improve relations with adversaries like Russia, and pull out of numerous international agreements. Flynn was fired after just three weeks after lying about his contacts with Russia, and his replacement, retired Lt. Gen. H.R. McMaster, also struggled in the role.

In the search for the next adviser, “you’re probably looking for a rainbow-colored unicorn at this point.”

In the search for the next adviser, “You’re probably looking for a rainbow-colored unicorn at this point,” said Michael Leiter, who served as director of the National Counterterrorism Center under Presidents George W. Bush and Barack Obama. Leiter added, “I think there are people who will take the job, but I’m not sure there are people who will best serve the president and fill the challenging role of national security adviser.”

The White House said Tuesday that Bolton’s deputy, Charles Kupperman, would take over as acting national security adviser. Trump said he would name a replacement next week for the position, which does not require Senate confirmation.

Trump, who entered office without prior foreign policy experience, “in particular needs a national security adviser who not only shares his agenda, but is tactically experienced enough in the ways of Washington,” said Flynt Leverett, a professor of international affairs at Penn State University.

“It’s hard to identify particular individuals” who fit the bill, added Leverett, who served as the senior Middle East adviser on the National Security Council under Bush. 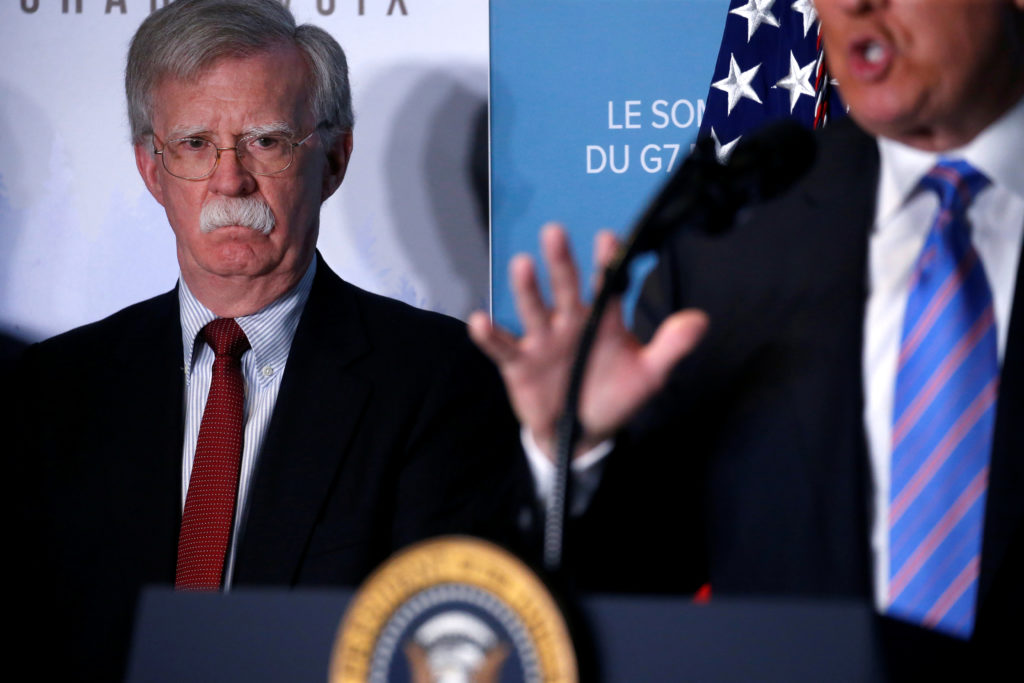 When Bolton joined the White House in April 2018, he was widely seen by Trump allies and Republican lawmakers as a veteran foreign policy expert who could project a sense of stability on matters of national security after Flynn and McMaster’s tumultuous stints.

But Bolton’s hawkish views did not go over well with a president who has questioned America’s involvement in costly foreign conflicts.

Bolton wanted a hardline approach to Iran, including withdrawing the U.S. from the Iran nuclear agreement, and reportedly supported the idea of military action after Iran shot down a U.S. drone earlier this year. Secretary of State Mike Pompeo also supported a strike, but Trump canceled the plans at the last minute. Last month, at the Group of Seven summit in France, Trump said he would be willing to renegotiate a nuclear deal with Iran.

Bolton also appeared at odds with Trump on denuclearization talks with North Korea, another one of the president’s signature foreign policy issues.

In May, Bolton said a new round of North Korean ballistic missile tests violated UN resolutions, undermining Trump’s position that historic talks with North Korean leader Kim Jong Un had laid the groundwork for a deal.

Trump rebuked Bolton by dismissing the importance of the missile tests the next day.

“North Korea fired off some small weapons, which disturbed some of my people, and others, but not me,” Trump wrote on Twitter. Months later at the G7 summit, Trump expressed displeasure with the tests but maintained that they hadn’t run afoul of UN rules, underscoring the deep chasm between Trump and Bolton on how to approach a longtime adversary.

Sung-Yoon Lee, an expert on U.S.-North Korea relations at Tufts University, said Bolton’s influence over North Korea policy may have been stronger than appeared.

“No matter what you think of Bolton and his worldview, he was an influence in the White House that may have dampened Trump’s reckless outreach to North Korea,” he said.

Daniel Benjamin, the director of the John Sloan Dickey Center for International Understanding at Dartmouth College, argued the Trump-Bolton partnership was flawed from the start.

“Trump, for all his bellicose remarks, appears to want to avoid a war in the Persian Gulf, and wants to get out of Afghanistan at all costs. Both of those things are problematic for Bolton,” said Benjamin, a former ambassador-at-large and senior counterterrorism official at the State Department. He added that he thinks Bolton regarded what Trump was trying to do with North Korea “with great skepticism.” 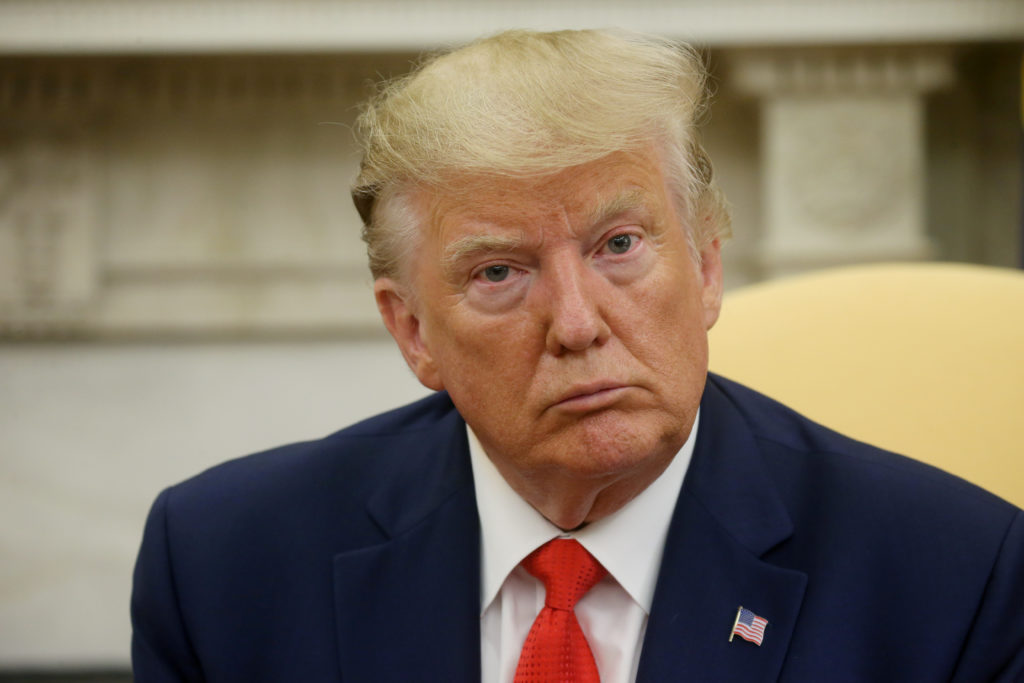 President Donald Trump answers questions from the news media in the Oval Office of the White House in Washington, on September 11, 2019. REUTERS/Leah Millis

Others argued that Trump deserved some credit for pushing out an adviser with a history of calling for more U.S. military action abroad.

“I think those instincts should be acknowledged and, even to some extent, encouraged,” said Shadi Hamid, a senior fellow at the Brookings Institution.

But after three national security advisers in less than three years, Bolton’s firing also signaled that Trump is not willing to let others control his decision-making, Hamid said. “This idea that the people around him can shape him and push him in a particular direction is simply not founded,” he said.

“This isn’t the time for training wheels for the national security adviser. I would argue for someone who has experience.”

Several of the people reportedly on the shortlist to replace Bolton are more closely aligned with Trump. Stephen Biegun, the United States special representative for North Korea, has not clashed with the president on that issue. Another potential contender for the job, Fred Fleitz, a former National Security Council staffer and chief of staff to Bolton, is seen as a steady policy hand.

But simply agreeing with Trump’s agenda is one thing. Figuring out how to coordinate policy between the White House and various government agencies is perhaps a harder challenge.

Creating a smooth interagency workflow eluded McMaster, Bolton’s predecessor, who was fired in early 2018 only 13 months into the job. He had clashed with senior administration figures such as then-Defense Secretary James Mattis and John Kelly, the former White House chief of staff.

Apart from the actual job duties, any candidate who takes the position will run the risk of falling out of favor with Trump and eventually being forced out in highly public fashion. The list of national security, defense and other senior administration officials who were ousted over their disagreements with Trump is long. Mattis and former Secretary of State Rex Tillerson were also shown the door.

“We’re all accustomed to” constant turnover in the Trump administration, “but it doesn’t make for effective policy,” said Andrew Weiss, a Russia expert at the Carnegie Endowment for International Peace.

Yet despite the challenges involved, national security adviser remains a prominent position that carries a lot of cachet, not to mention influence in shaping America’s role on the world stage.

Left: John Bolton's departure as national security adviser has set in motion a job hunt to fill one of the hardest jobs in Washington under President Donald Trump File photo by REUTERS/Leah Millis