“Progress in arms control is not an end in and of itself,” page 73 of the 74-page strategy says, adding that new advances in arms control are “difficult to envision.” Such agreements can foster cooperation and confidence among nuclear weapons states and reduce the risk of miscalculation that could lead to war, it notes — while accusing Russia of undermining those aims by violating numerous treaties.

The new U.S. posture focuses heavily on what the administration sees as an overdue modernization of the nuclear arsenal, the laboratories and plants that support the arsenal, and the far-flung communications and early warning systems that enable the Pentagon to command and control the weapons. It asserts that Russian strategy and doctrine emphasize the potential coercive and military uses of nuclear weapons, and calls for two new U.S. capabilities in response — a sea-launched nuclear cruise missile and a “low-yield” warhead for submarine-launched ballistic missiles.

But the diminution of arms control as a central part of the nuclear strategy may be just as striking.

When the Obama administration did its own reset of the strategy in 2010, it argued the world could be made safer if the U.S. reduced the role of nuclear weapons in defense strategy. It was hardly a novel idea: Republican and Democratic administrations embraced nuclear arms reduction efforts for decades, even during tense points of the Cold War. The Trump administration, for its part, says it’s “willing to engage in a prudent arms control agenda” while dismissing the idea of marginalizing nuclear weapons as a defense tool.

Criticism of the new strategy, including its lukewarm approach to arms control, is likely to arise at a House hearing Tuesday where Defense Secretary Jim Mattis will make his first public statements since the report’s release last week. 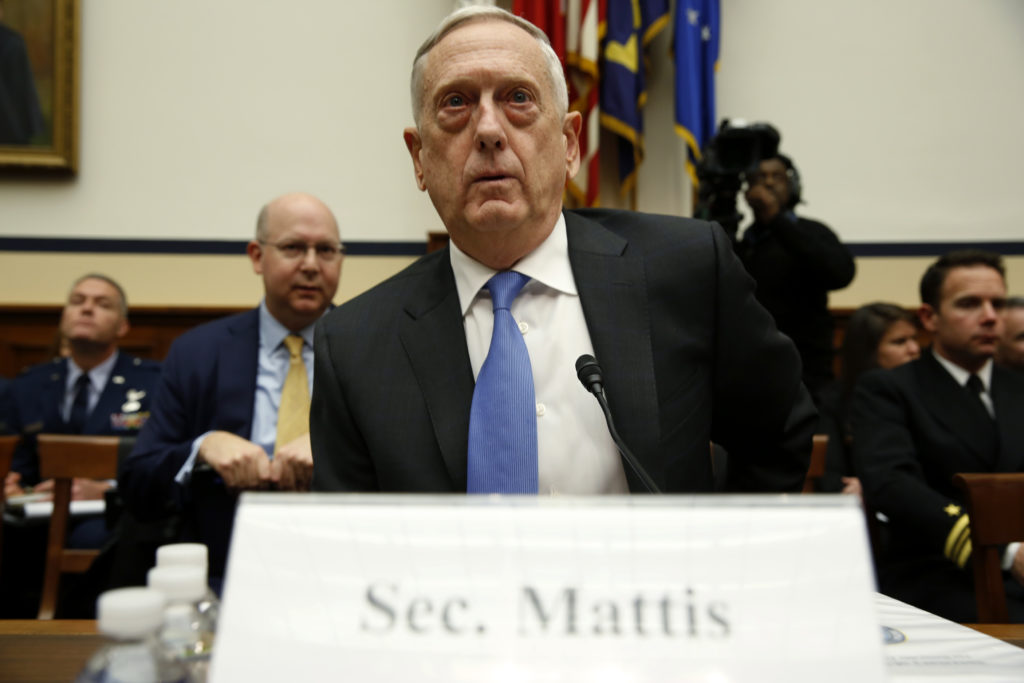 Defense Secretary Jim Mattis arrives to testifies before the House Armed Services Committee on “The National Defense Strategy and the Nuclear Posture Review” on Capitol Hill in Washington, D.C. Photo by Joshua Roberts/Reuters

Russia was quick to assail what it deemed an “anti-Russian” nuclear strategy. In a statement Monday, its Foreign Ministry called the review’s assertions frightening, “utterly hypocritical” and dangerous. It asserted that Russia would consider using nuclear weapons in only two scenarios: in response to an attack involving nuclear or other weapons of mass destruction, and in response to a non-nuclear assault that endangered the survival of the Russian nation.

It took aim at the Pentagon’s proposal to develop a nuclear cruise missile that could be launched from a ship or submarine. Such a weapon existed for years but was withdrawn from active service by the administration of President George H.W. Bush in the early 1990s and retired by the Obama administration.

Bringing a version of the missile back would be a response to Russia’s alleged violation of the 1987 Intermediate-range Nuclear Forces treaty, the Pentagon said, adding that it might reconsider if Moscow returned to compliance and “corrects its other destabilizing behaviors.”

“That is a proposal that is very clearly designed to look like an arms control proposal, but to guarantee that it won’t be accepted,” Acton said. He broadly described the U.S. strategy’s approach to arm control as worrying, including its silence on whether the U.S. wants to exercise an option in the New START treaty to extend its terms for five years. The deal is scheduled to expire in 2021.

Russia is questioning U.S. compliance with the treaty, whose limitations on long-range nuclear weapons took effect Monday. The Foreign Ministry said Russia is well within the treaty’s limitations of 1,550 strategy nuclear warheads and 700 deployed launchers.

The ministry took note of a State Department statement saying the U.S. reached the treaty limits last August, but it suggested the U.S. may have cheated by “reconfiguring” some B-52 bomber aircraft and missile launchers aboard Ohio-class submarines to non-nuclear status. It didn’t provide details but said the changes were done in such a way that Russia is unable to confirm that the reconfigured B-52s and sub-based launchers are truly non-nuclear.

The State Department insisted the U.S. is fully adhering to its commitments.

“In order to meet the central limits of the treaty, the United States developed and utilized conversion procedures in full compliance with its treaty obligations,” it said.

Left: A 2003 aerial photo of the Pentagon in Arlington, Virginia. Photo by Andy Dunaway/USAF via Getty Images

Is the U.S. prepared to defend against a North Korean missile?