Vulnerable House and Senate Republicans began the 2020 election cycle navigating the impeachment of an unpopular president at a time when the economy showed signs of slowing down.

And that was before the coronavirus pandemic.

President Donald Trump’s much-criticized handling of the public health crisis could make things even harder for Republicans in moderate House districts and the small handful of battleground states that will determine control of the Senate.

The economic damage from the virus has added another challenge, weakening the president’s strongest argument for reelection, potentially hurting Republicans in down-ballot races whose electoral fates are linked to Trump’s performance at the top of the ticket — and giving Democrats an opening to argue they would do a better job of seeing the country through the current crisis

More than 74,000 people in the United States have died from COVID-19. The unemployment rate jumped to 14.7 percent in April, a level not seen since the Great Depression. More than 30 million Americans have filed jobless claims since states began shutting down their economies in response to the crisis in mid-March.

The combination of the pandemic and a cratering economy is especially worrisome for Senate Republicans, who hold a slim 53-47 seat advantage in the Senate. Democrats need to flip just three seats and win the White House in the general election to control the Senate, or win four seats if Trump gets reelected.

The most vulnerable Republican incumbents are Sens. Susan Collins of Maine, Martha McSally of Arizona, Cory Gardner of Colorado, and Thom Tillis of North Carolina. All four races are rated a toss-up by the Cook Political Report.

Recent polls show the Democratic challenger leading by a narrow margin in Maine and North Carolina. Mark Kelly, the astronaut and husband of former Democratic Rep. Gabby Giffords, has a comfortable lead over McSally in Arizona, and former Gov. John Hickenlooper has opened up a double-digit lead over Gardner in Colorado.

“At this point, I think it’s closer than we would like to see,” Loraine Pellegrino, the former president of the Arizona Federation of Republican Women, said of the state’s Senate race. Democrats are “fielding a very formidable candidate and [McSally] is going to have to work hard. That’s the reality.”

In addition to the four main Senate battleground states, Democrats are also targeting Iowa and Montana, where the Republicans up for reelection in November — Joni Ernst in Iowa, and Steve Daines in Montana — have aligned themselves closely with Trump, and where the races have tightened in recent months.

Collins provides perhaps the best example of the risks Republicans face in running with Trump as the party’s standard bearer. Collins was elected to the Senate in 1996 and built a reputation over two decades for being a moderate, independent-minded Republican.

That reputation has been damaged in the past three years under Trump. Collins voted against the GOP’s efforts to repeal the Affordable Care Act in 2017. But she joined Senate Republicans in passing a tax overhaul, approving the appointment of Justice Brett Kavanaugh to a seat on the Supreme Court, and rejecting the articles of impeachment against Trump earlier this year.

Just last month, in an interview with a Maine newspaper, Collins praised Trump’s early response to the coronavirus pandemic, singling out his decision to ban travel from China. Health experts have criticized the travel ban and other aspects of Trump’s response, including the inability to ramp up testing.

“At this moment it’s very clear what [the 2020] election is about. It’s about the pandemic, responses to the pandemic, and who’s responsible,” said Amy Fried, the chair of the political science department at the University of Maine.

By refusing to distance herself more from Trump, Collins risks alienating voters fed up with the way the federal government has handled the crisis, Fried said. “Collins is in a difficult situation,” she added. “Even if she were to in some way try to separate herself from Trump, that could be seen as politically expedient.” 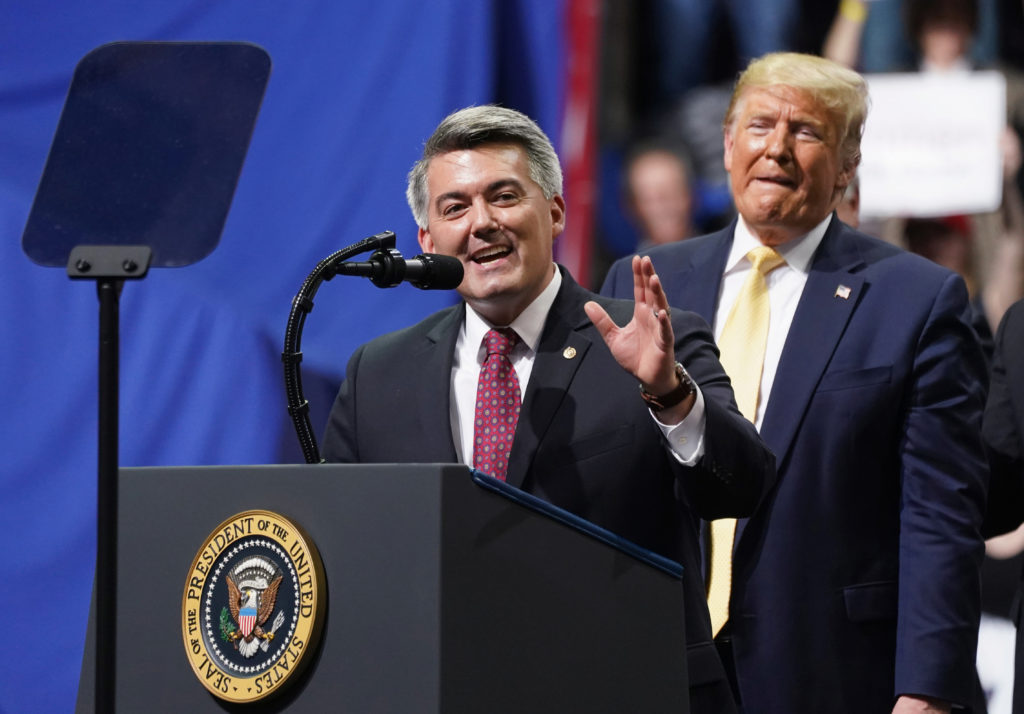 The same is true for Gardner in Colorado. Gardner was considered a possible swing vote in the Senate impeachment trial, but he stuck by Trump and has continued to do so during the current crisis.

Gardner “could have said on hydroxychloroquine, ‘I’m following the advice of the best medical people in Colorado,’” Ridder said, referring to the drug Trump has touted as a possible treatment for COVID-19 despite a lack of evidence and concerns from public health officials. But “Gadner hasn’t taken that kind of independent stance. He hasn’t said anything negative about Donald Trump,” Ridder added.

READ MORE: What you need to know about hydroxychloroquine and coronavirus

In digital ads and virtual town halls Democrats have been careful not to come across as overly partisan during a public health crisis while still striking a contrast with their Republican opponents.

Democratic Senate candidates are “taking the opportunity to talk about their campaigns and what they’re doing, and how they can be helpful,” said Helen Kalla, the rapid response director for the Democratic Senatorial Campaign Committee. At the same time, she said, the contrast was clear.

Republicans acknowledged that the pandemic changed the dynamics of the 2020 election cycle.

“If the economy continues to crater, I think that presents serious problems for the president,” said Michael McAdams, the press secretary for the National Republican Congressional Committee, the House GOP’s campaign arm.

McAdams added that he thinks “hands down Republicans win the issue of the economy overwhelmingly” and “Republicans and President Trump have shown they have the ability to steer the economy back to the record highs we saw before the pandemic,” McAdams said.

For the time being, Trump’s approval rating has remained steady during the pandemic. Polls show most of his criticism is coming from Democratic voters, not the president’s Republican base. And Democrats will have their own challenges in flipping the Senate and retaining control of the House.

Democrats have a 233-196 seat advantage in the House. (There are five open seats and Rep. Justin Amash of Michigan, who had been a Republican, joined the Libertarian Party this year). But the party has to defend 30 seats in districts Trump won in 2016. In contrast, Republicans hold just three House seats in districts Hillary Clinton carried in the last presidential election.

Republicans are targeting moderate Democrats who flipped GOP districts in the 2018 midterms, with a message that will focus in part on the House vote to impeach Trump last year.

“A lot of these Democrats promised to be moderates,” but have compiled liberal voting records and backed impeaching Trump, McAdams said. “That’s going to be a really hard sell to make to voters that they won over in 2018.”

Pellegrino argued that the impeachment vote and the more recent attacks against Trump over the coronavirus would motivate Republican voters to turn out in November to support the party up and down the ticket.

“I know people that weren’t involved [in the 2020 election] before who are now, because they don’t like the treatment of the president” during the coronavirus, she said.

After this article was published, McAdams reached out to clarify that Republicans believe they have a stronger economic record to run on than Democrats. The article reflects that view.