Reset it and forget it. A pattern in the Trump campaign

Donald Trump’s economic speech in Detroit on Monday was the latest in a growing line of “resets” for his presidential campaign.

Resetting as a strategy isn’t new. Most White House bids feature one or two such resets: moments when a campaign undergoes a staff shakeup, changes messages or makes some other adjustment to try and regain momentum after a difficult stretch.

READ MORE: The hidden sexism that could sway the election

But Trump’s campaign has attempted an unprecedented number of resets this year, according to presidential historians and political consultants following the election, in an effort to bounce back from a seemingly never-ending string of controversial statements and policy proposals.

“There have been resets in numerous campaigns when things didn’t go well, but usually it’s a measured response to changes in the polls,” said Dan Carter, a historian and professor emeritus at the University of South Carolina.

Trump’s reboots usually take the form of a scripted, highly choreographed speech, often timed to counteract weeks of negative press coverage and criticism from elected officials in both parties.

“This is something quite different,” Carter said. With Trump, each reset “is a response by his campaign to his impulsive behavior and inability to keep on track with any theme other than being politically incorrect.”

Trump’s reboots usually take the form of a scripted, highly choreographed speech, often timed to counteract weeks of negative press coverage and criticism from elected officials in both parties.

Trump staged his first major reset in April, when he delivered a prepared speech on foreign policy in a hotel ballroom in Washington, D.C., that was aimed at silencing critics in the Republican Party who claimed he lacked a basic grasp of global affairs.

Though the speech contained few policy details, supporters hailed it as a turning point in the primaries — a moment when Trump took strides to become a more credible presidential candidate.

But in the weeks that followed, Trump resumed giving controversial, stream-of-consciousness speeches, and making inflammatory statements on Twitter, to the dismay of Republican leaders and donors around the country.

That cycle has repeated itself throughout Trump’s campaign. In June, Trump fired his campaign manager, Corey Lewandowski, and replaced him with Paul Manafort, a veteran political operative who was hired to instill a sense of discipline to the campaign.

But despite Manafort’s influence, Trump continued veering off message in the weeks leading up to the Republican National Convention. He fought openly with Republicans in Congress, and criticized a judge’s Mexican heritage, comments that House Speaker Paul Ryan called “racist.” Trump also struggled to smoothly roll out his vice presidential pick, Indiana Gov. Mike Pence, before the convention.

Trump supporters billed his RNC speech as yet another reset, but he attacked Sen. Ted Cruz in a press conference the very next day, and has not stopped stirring controversy since. The latest example was Tuesday, when Trump said at a rally that “Second Amendment people” could take action against Clinton if she becomes president.

“Once you get certainly into August and September it’s hard to change people’s attitudes for the better.”

The speech in Detroit on Monday came on the heels of a particularly rough period for Trump in which he picked a fight with the parents of a soldier who was killed in Iraq, and briefly withheld his endorsement of Ryan and Sens. John McCain and Kelly Ayotte.

Trump’s poll numbers have gone down significantly as a result over the last two weeks. At the start of the Republican convention in late July, he trailed Clinton by 43.8 to 40.6 percent, according to Real Clear Politics’ average of national polls. Clinton’s average lead in national polls through Monday had grown to 7.5 points.

“There is a school of thought, and I do subscribe to it, that the fundamentals of a presidential race get set in the summer,” said Matt Mackowiak, a Republican strategist. At this point in the election, Mackowiak said, it would take a significant amount of “money and some type of outside factor to turn Trump’s image around.”

Presidential candidates in the past have tried to recast their campaigns with varying degrees of success. 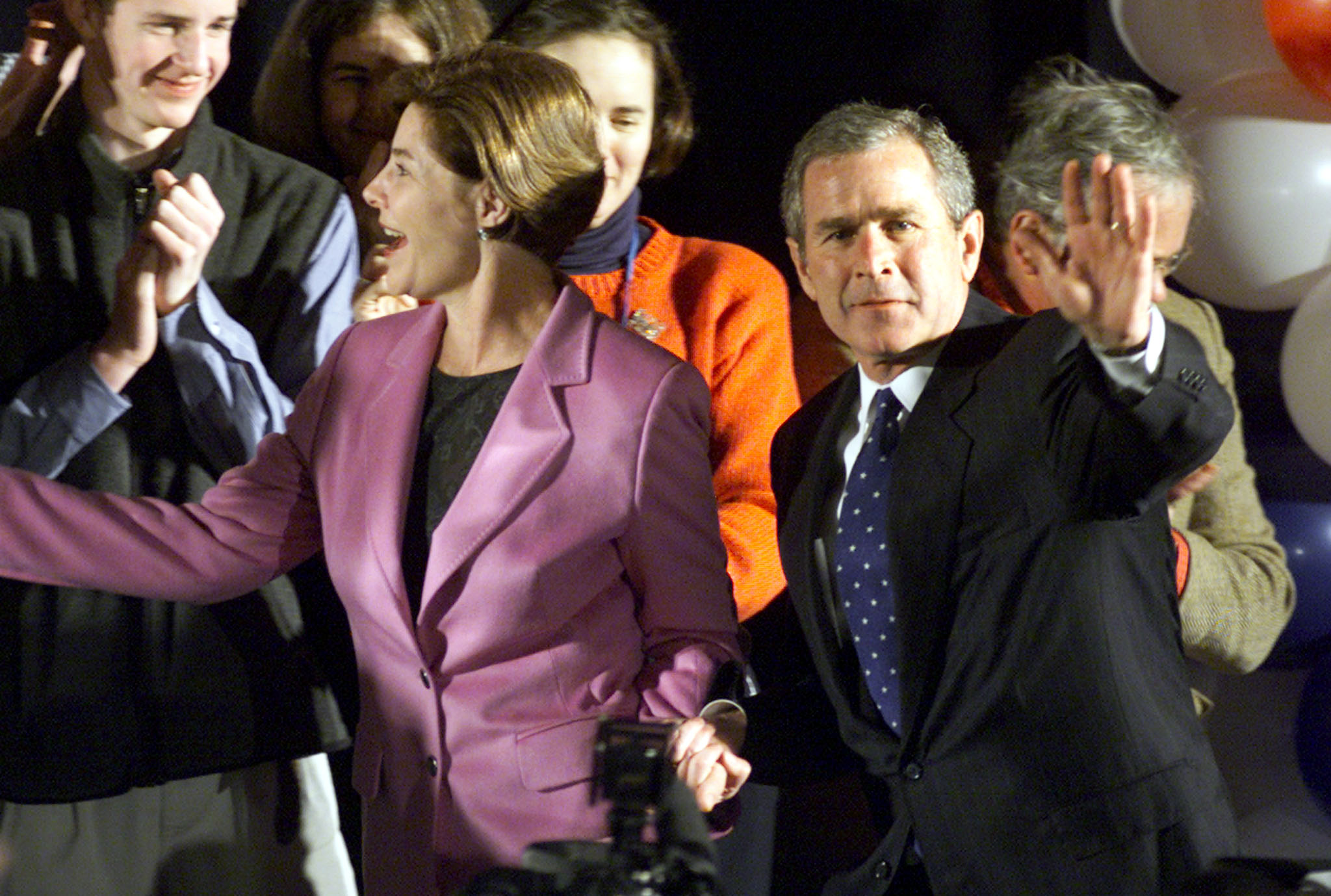 George W. Bush at rally after finishing second in the New Hampshire primary on February 1, 2000. Bush reset his campaign after the loss and went on to win the presidential election. File photo by REUTERS

In 1968, Hubert Humphrey repositioned himself to the left of President Lyndon Johnson on the Vietnam War, in a year when liberal voters clamored for an anti-war candidate. The move helped Humphrey win the Democratic nomination, but he lost the general election to Richard Nixon.

Three decades later, George W. Bush reset his campaign in South Carolina after losing the New Hampshire primary by 19 points to McCain. Bush debuted a reform-themed campaign slogan, and launched aggressive new ads against McCain, which helped him win the state and go on to secure the Republican nomination.

“That was a classic” reset, said Roy Fletcher, a former senior campaign adviser to McCain. The Bush team “just turned on a dime. It was extremely nimble.”

Whether Trump’s campaign can show the same nimbleness now is an open question. Supporters argued this week that as voters begin paying more attention to the race, many would be willing to give him a second, or a third or fourth, look.

“Trump is going to make mistakes. He’s never run for office,” said Cindy Costa, a member of the Republican National Committee who is backing Trump. “The speech that he gave in Detroit is an indication that he got on message and pretty much stayed there,” she added.

Others said there may be no magic reset button for Trump to turn his candidacy around, with just three months left to go before Election Day.

“Once you get certainly into August and September it’s hard to change people’s attitudes for the better,” said Carter. “You can change them for the worse, you can reset in a negative way, but it’s very hard to get a positive reset.”

Mackowiak said the issue was the messenger, not the message. “I’m extremely discouraged right now,” he said. “You can reset your strategy. You can’t change your candidate.”

Left: Donald Trump speaks to the Detroit Economic Club earlier this week. The speech was the latest in a long line of "resets" for his campaign. Photo by Eric Thayer/REUTERS