Anne Barber, a retired public school teacher from Georgia, does not approve of foul language, but she does support President Donald Trump and his immigration policies. So the president’s remarks Thursday, in which he reportedly called African nations “shithole countries,” left Barber in an awkward position.

“Really, he shouldn’t have said it,” Barber said in a phone interview Friday. Still, she added, she agreed with Trump’s larger point. “I think Americans should come first.”

Billy Shreve, a county councilmember in Maryland, chalked the comments up to Trump’s past as a real estate developer and his years at a military boarding school as a teenager.

“You got the fact that he grew up in the construction business and went to military school,” said Shreve, who has a background in construction and said he related to Trump’s word choice. “It’s just common language. The snowflakes aren’t used to it.”

As news coverage of Trump’s latest offensive comments continued Friday, supporters faced an all-too familiar reality: trying to defend, excuse or distance themselves from remarks that many viewed as further proof that the president is racist.

READ MORE: Every moment in Trump’s charged relationship with race

Trump distanced himself Friday from the comments he made at a private White House meeting on immigration with congressional lawmakers the day before. At the meeting, Trump questioned why the United States should accept immigrants from “shithole countries” in Africa, according to several people who were in the room at the time.

Referring to Haitian immigrants, Trump reportedly said “take them out,” and also wondered why the U.S. wasn’t focused on accepting more immigrants from countries like Norway.

The White House did not deny Trump’s comments in a statement Thursday night. In a series of tweets Friday, Trump denied making the comment about Haitian immigrants. He also defended his language, though he didn’t mention the word “shithole” specifically. “This was not the language used,” Trump tweeted.

Sen. Dick Durbin, D-Ill., who attended the Thursday meeting, insisted Friday that Trump used the language in speaking about immigrants from Haiti and countries in Africa.

The incident highlighted Trump’s frequent tendency to make derogatory remarks about people of color. Last year, Trump said Haitian immigrants “all have AIDS,” and that Nigerian immigrants would not “go back to their huts” after visiting the U.S., according to a New York Times report. The White House later denied that Trump made those comments.

It also set off fresh questions of whether Trump’s racist language helps or hurts him politically, particularly among the largely white, conservative voters that helped him win the presidency.

But Trump supporters on Friday pushed back on the notion that racist comments appeal to his base, an argument that has been made countless times in articles, books and on cable T.V.

“It does not appeal to his base, that’s a wrong assumption,” Cindy Costa, a member of the Republican National Committee from South Carolina and a Trump supporter, said in a phone interview. “His base does not want a racist president, and he’s not a racist president.” 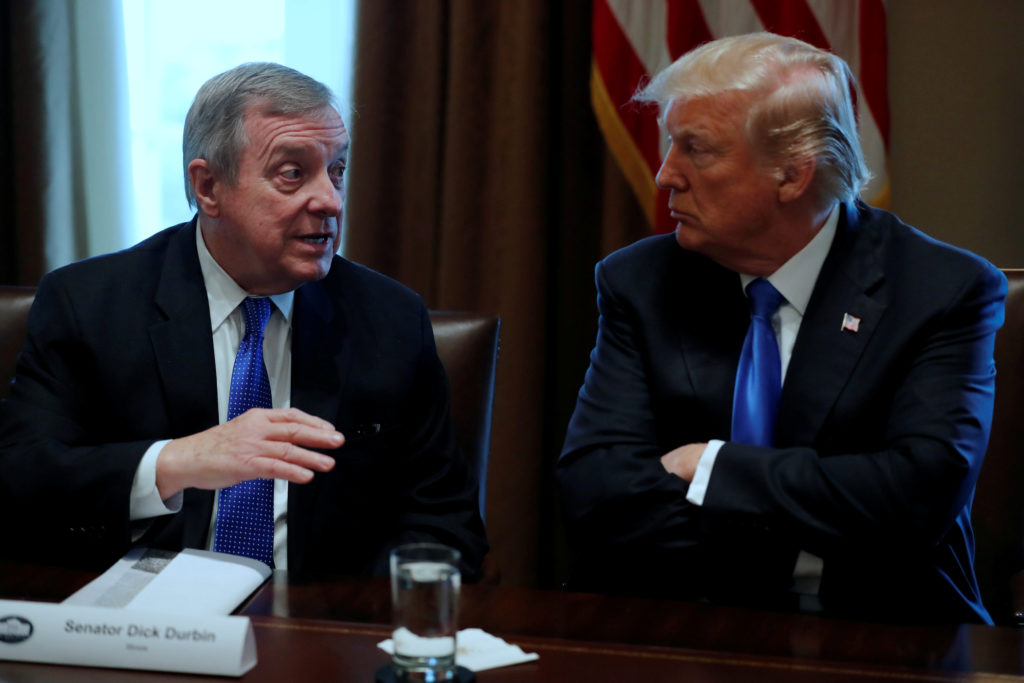 President Donald Trump, flanked by U.S. Senator Dick Durbin, D-Ill., listens during a bipartisan meeting with legislators on immigration reform at the White House on Jan. 9, 2018. In a follow-up bipartisan meeting held on January 11, Trump questioned why the United States would want to have immigrants from Haiti and African nations, referring to some as “shithole countries.” Photo by REUTERS/Jonathan Ernst/Files

Richard Jordan, a real estate investor and self-described “avid Trump supporter” in Georgia, agreed. “I don’t think necessarily that racial comments like that appeal to us,” he said. “What I believe is really driving us is the refreshing, unfiltered, kind of call-it-what-it-is language that’s non-political.”

Jordan added that he understood why Trump described developing countries like Haiti the way he did. In Haiti, “people are accustomed to living a certain lifestyle, and they’re not going to change that,” Jordan said. “Compared to how we live and what we take for granted in America, is that a shithole country? Some people can say that. I wouldn’t say that. But some people can.”

He added, “I don’t care how bad the media tries to twist Trump’s words, I’m going to vote for him in 2020 regardless.”

Indeed, many on the right blamed the firestorm created by Trump’s remarks on the media and Democratic lawmakers, who they said took the president’s words out of context in an effort to deflect attention away from his accomplishments.

“On the left, they look at everything through the prism of race and religion. It’s all about identity politics,” said John Hajjar, who served as the co-chair of the Middle Eastern Coalition for Trump during the 2016 election.

Hajjar said he supported Trump’s goal of limiting legal and illegal immigration to the country, though he thought Trump used “inappropriate language” at the White House meeting. Critics “really can only hang their hats on the fact that they do not like Donald Trump. They cannot hang their hats on his record.”

The reactions to Trump’s comments also underscored the different ways that people approach his presidency. Critics often focus on the rhetoric, while supporters focus on the policies Trump is putting in place, said Steve Gill, a former conservative radio talk show host in Tennessee.

“The vulgarity of the comments, if he actually said it and there is some dispute, is definitely something people find distasteful,” Gill said. “But a lot of the base accepts the content, even if they don’t embrace the way it’s said.”

Political strategists and pollsters said Friday that a single remark, however offensive it may be, won’t sway many Trump voters’ views of the president.

“Donald Trump represents what I call the middle finger segment of the electorate: people who are fed up with politicians and politics as usual,” said Dennis Goldford, a political scientist at Drake University in Des Moines, Iowa. “That really hardcore, immoveable Trump support is about a quarter of the electorate. Talking about ‘shithole countries’ is not going to change that.”

Every moment in Trump’s charged relationship with race

How African countries are reacting to Trump’s vulgar comments

Trump asks why U.S. would want to admit more immigrants from ‘s***hole countries’

Left: President Donald Trump, seen before signing a proclamation to honor Martin Luther King Jr. in the Roosevelt Room of the White House on January 12, 2018. Photo by REUTERS/Joshua Roberts