VALDOSTA, Ga. — The arena’s sound system had been blaring songs by Billy Joel and The Rolling Stones in a loop for half an hour when suddenly the music stopped and a rumbling male voice announced, without any warm-up, “Ladies and gentleman, the next president of the United States, Donald J. Trump.”

And there he was, the Republican front-runner, walking on stage at Valdosta State University in a dark suit and pale pink tie.

Most presidential candidates are introduced by surrogates who perform the role of an opening act, building anticipation for the main event.

Not Trump. As the following play-by-play reconstruction of his rally here shows, Trump takes an entertaining, highly unorthodox approach to the art of the campaign trail stump speech, one that combines two parts stand-up comedy routine, and zero parts substantive policy discussion.

In Valdosta, on the eve of today’s Super Tuesday primaries, Trump approached the podium as the crowd of 3,000-plus supporters cheered and snapped pictures of the real estate developer and former reality T.V. star.

Normal stump speeches start with a long (and boring) list of thank you’s to local elected officials and the institution hosting the event. Trump dispensed with all that.

The audience loved him back, and he launched immediately into a typical Trump speech, which started with him marveling at the size of the crowd. When he was finished, Trump seized on the latest CNN poll, which showed him with a 30-point lead over his Republican rivals. 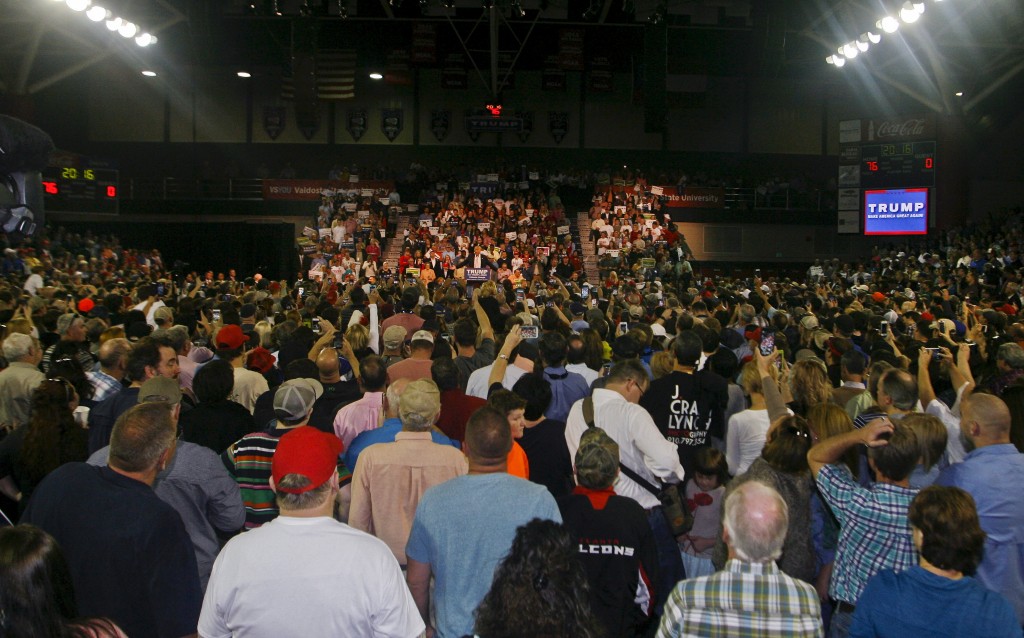 A packed venue at a Donald Trump campaign rally at Valdosta State University in Valdosta, Georgia on February 29. Photo by REUTERS/ Philip Sears

But Trump didn’t stop at the top-line numbers. He delved into subcategories as well, noting that he was leading among evangelicals, old voters, young voters, “higher educated” voters, and the “little bit less than highly educated, which is OK.”

“In other words,” Trump said, summing up, “we’re winning with everybody.”

Then Trump switched gears abruptly and announced that he had received the endorsement of NASCAR chief Brian France and several prominent race car drivers. (Head’s up: Trump jumps from topic to topic at random, often stitching them together with complete non sequiturs).

France and the rest of the NASCAR team joined Trump behind the podium. A few drivers made short speeches, and then the group dutifully exited stage left. 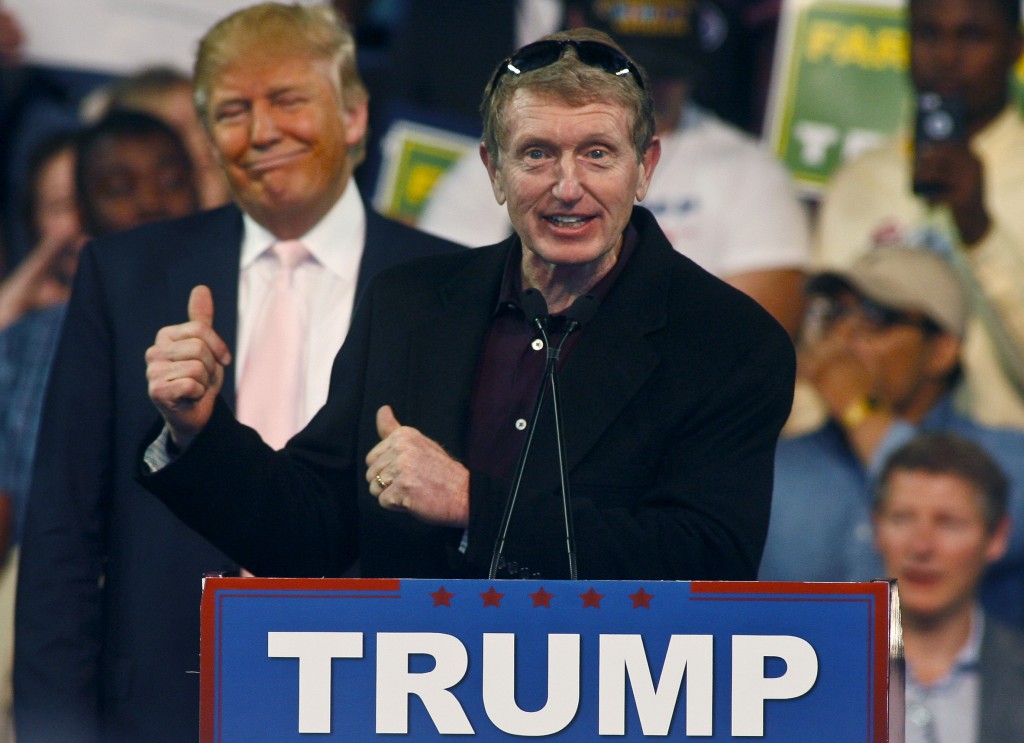 Once they were gone Trump took aim at the media: “20 percent are good, 80 percent are bad, and 40 percent are disgusting,” he said. But that doesn’t matter, Trump added, and instructed the crowd to turn and stare back at the television cameras positioned on a riser across from the stage, “because what we have going on is so special.”

From there, Trump sketched out his plans to lower prescription drug costs, save social security by cutting “waste, fraud, and abuse” in the federal budget, and fix America’s trade deficit.

At this point in his stump speech, which was indistinguishable from dozens of speeches this reporter has covered over the past several months, Trump turned his focus to his wealth. He reminded the audience that he was self-funding his campaign and that he couldn’t be bought by deep-pocketed donors.

Then, after an extended riff on trade, Trump said, out of the blue: “Now Mexico. Everybody talks about the wall. And by the way, who’s going to pay for the wall?” Trump paused, and the crowd shouted in unison: “Mexico!”

The segment on Mexico turned into an aside on the heroin epidemic in New Hampshire, from which he transitioned into an analysis of his recent war of words with the Pope.

It was just before the South Carolina Republican primary last month, he said, when news broke that Pope Francis had issued a statement suggesting that Trump’s anti-immigrant rhetoric was unChristian.

Trump explained what was going through his mind when an adviser told him that the Pope had decided to take him on.

“The Pope? That’s big league, let’s face it,” Trump said. “This can only happen to me. The Pope is hitting me just before the election in South Carolina.”

Trump concluded by noting that the Pope walked back his statement the next day, a concession that brought some measure of closure to their showdown.

Trump then sailed through another story about the nation’s trade woes, promised to repeal Obamacare and abolish the common core education standards, and crowed about a luxury hotel that one of his companies is building on Pennsylvania Avenue in downtown Washington, D.C.

“It’ll be one of the great hotels of the world,” Trump said and joked, if he loses his bid for the White House, he can always move with his family into the hotel down the street.

The joke prompted Trump to invite his family to join him on stage. There was a brief moment of confusion, and then a wave of disappointment swept through the crowd when Donald Trump Jr. emerged alone, without his popular sister Ivanka or step-mother Melania Trump.

In most cases, family members of presidential candidates give detailed testimonials at campaign events. But Donald Trump Jr. stuck to his father’s script, delivering an unusual — and unusually short — endorsement:

“He’s gonna fix the mess, he’s gonna cut the nonsense, he’s going to make America great again, and I couldn’t be more proud of him.”

Those were his remarks in their entirety. After his son left the stage, Trump shifted to the second amendment. Which turned out to be a bridge into a lengthy set piece on faith.

He touted his endorsement by the evangelical leader Jerry Falwell Jr., and then he swiftly pivoted to a defense of his proposal to ban Muslim immigrants from entering the U.S. He finished the bit with a call for religious protection.

READ MORE: Sanders supporters may soon have to choose between Clinton and Trump

“So, in finishing,” Trump said next, after the crowd’s applause died down. But he wasn’t able to finish, because he was interrupted by a protester shouting something inaudible.

Protesters are a common occurrence at Trump events. Trump stumbled when dealing with hecklers early on in the campaign, but he’s since become more adept at handling such disruptions.

On this day in Valdosta, Trump waited calmly as the man was escorted from the arena floor, and then he resumed his closing remarks.

Left: Trump takes a highly unorthodox approach to the art of the campaign trail stump speech. Photo by REUTERS/Philip Sears