Two weeks after the 2010 midterms, the results are receding into the past, and the new reality is settling in.

But before we go too far down the road of analyzing the shift in the American voting public – the conservative wave, tidal wave or tsunami, depending on which water metaphor you prefer – some words of caution from Patchwork Nation.

There is no question that the political realities in Washington changed dramatically on Nov. 2. The Republican Party, winning 60-plus seats, captured control of the House, and the GOP took six seats in the Senate.

But winning seats, and winning the larger philosophical debate with the voting public, are different battles.

If you step outside Washington and look closely at results through the Patchwork Nation framework, you may be left wondering how much the public’s political attitudes have actually changed. There is a danger in reading too much about the direction of the voting public out of the most recent Election Day – or in any election, for that matter.

As many have noted already, the people who actually voted two weeks ago were older and whiter than those who voted in other recent elections. But there’s more to the results than just race and age. Patchwork Nation has not fully examined all the House vote results by county yet – that data is still being crunched – but a look at the some of the Senate numbers shows the results do not look too far out of the ordinary.

Pennsylvania as a Test Case 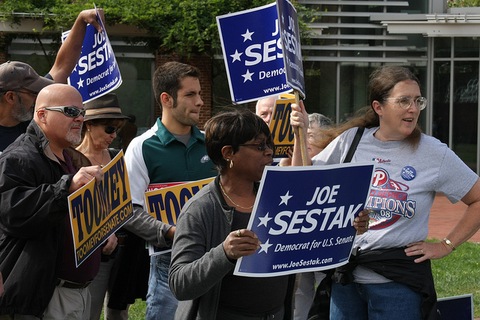 Democrats might find some solace in the turnout numbers. Turnout in the entire state was about a third off from where it was in 2008. But Philadelphia, a Democratic bastion, was down sharply – about 42 percent. If Philadelphia had turned out more of its vote, Sestak might have won. (Sestak carried 84 percent of the vote in the city.)

But Sestak’s real problem was in the wealthy Monied ‘Burb counties around Philadelphia – Berks, Bucks, Chester, Delaware, Lehigh, Montgomery and Northampton. President Obama carried all seven of those counties in 2008 by eight percent or more. Sestak carried only Montgomery and Delaware.

It is numbers like those that have the Obama camp worried about the need to reach out to political independents. The nation’s Monied-‘Burb counties are full of those voters – people who data and interviews show are less tied to any political affiliation and more focused on the economy than other voters.

In other words, in the context of the past three presidential races, Obama’s big win in these areas was something of an aberration.

Sestak still won the overall vote coming out of the seven Monied-‘Burb counties around Philadelphia by about 2,000 votes. The two counties he won are the most populous, and he won them big. But Pennsylvania’s Monied-‘Burbs vote, where those independent voters live, looked a lot more like 2000 or 2004 than 2008. And the vote in those counties is critical in Pennsylvania as it is in many other states.

Add it all up, and the GOP should be feeling pretty good about where things are headed, right? Not necessarily.

It’s hard to feel bad about the big wins the party had on Nov. 2, but nothing in the results from 2010 is conclusive of any trend. Counties like those in the Monied ‘Burbs swing – that is their nature. Considering the current economic volatility, nothing suggests they will settle.

There are two serious choices on most ballots, and therefore those who vote pick one or the other. The Election-Day vote measures a choice voters make on a particular day in a particular situation. It doesn’t measure depth of support or why people vote the way they do. That’s why Patchwork Nation is no fan of the red-blue map. Many of this year’s red counties could be blue again in 2012.

There is also the question of turnout in 2010. In a midterm in which the Republican base was fired up and the Democrats were demoralized, one might imagine this was about as good as the GOP could do with the Monied ‘Burbs in Pennsylvania and elsewhere.

Most important to remember, however, may be this: Two years ago there were more than a few stories about the great swing the electorate and the country’s new direction. Change the party names, and those headlines today don’t look unfamiliar.