NEW YORK — President Donald Trump, in a combative debut speech to the U.N. General Assembly, threatened the “total destruction'” of North Korea if it does not abandon its drive toward nuclear weapons.

Trump, who has ramped up his rhetoric throughout the escalating crisis with North Korea, told the murmuring crowd at the U.N. that “it is far past time for the nations of the world to confront” Kim Jong Un and said that Kim’s “reckless pursuit of nuclear weapons” poses a threat to “the entire world with an unthinkable loss of human life.

“Rocket man is on a suicide mission for himself and his regime,” Trump said about the North Korean leader. He said of the U.S.: “If it is forced to defend itself or its allies, we will have no choice but to totally destroy North Korea.”

Trump, who has previously warned of “fire and fury” if Pyongyang does not back down, claimed that “no one has shown more contempt for other nations and for the wellbeing of their own people than the depraved regime in North Korea.” And he scolded nations that he said have enabled and traded with North Korea, seeming to slight China, though he did not mention it by name.

Elected on the nationalist slogan “America First,” Trump argued that individual nations should act in their own self-interest, yet rally together when faced with a common threat. In addition to North Korea, Trump urged nations to join together to stop Iran’s nuclear program — he declared the Iran nuclear deal an “embarrassment” for the United States — and defeat the “loser terrorists” who have struck violence across the globe. 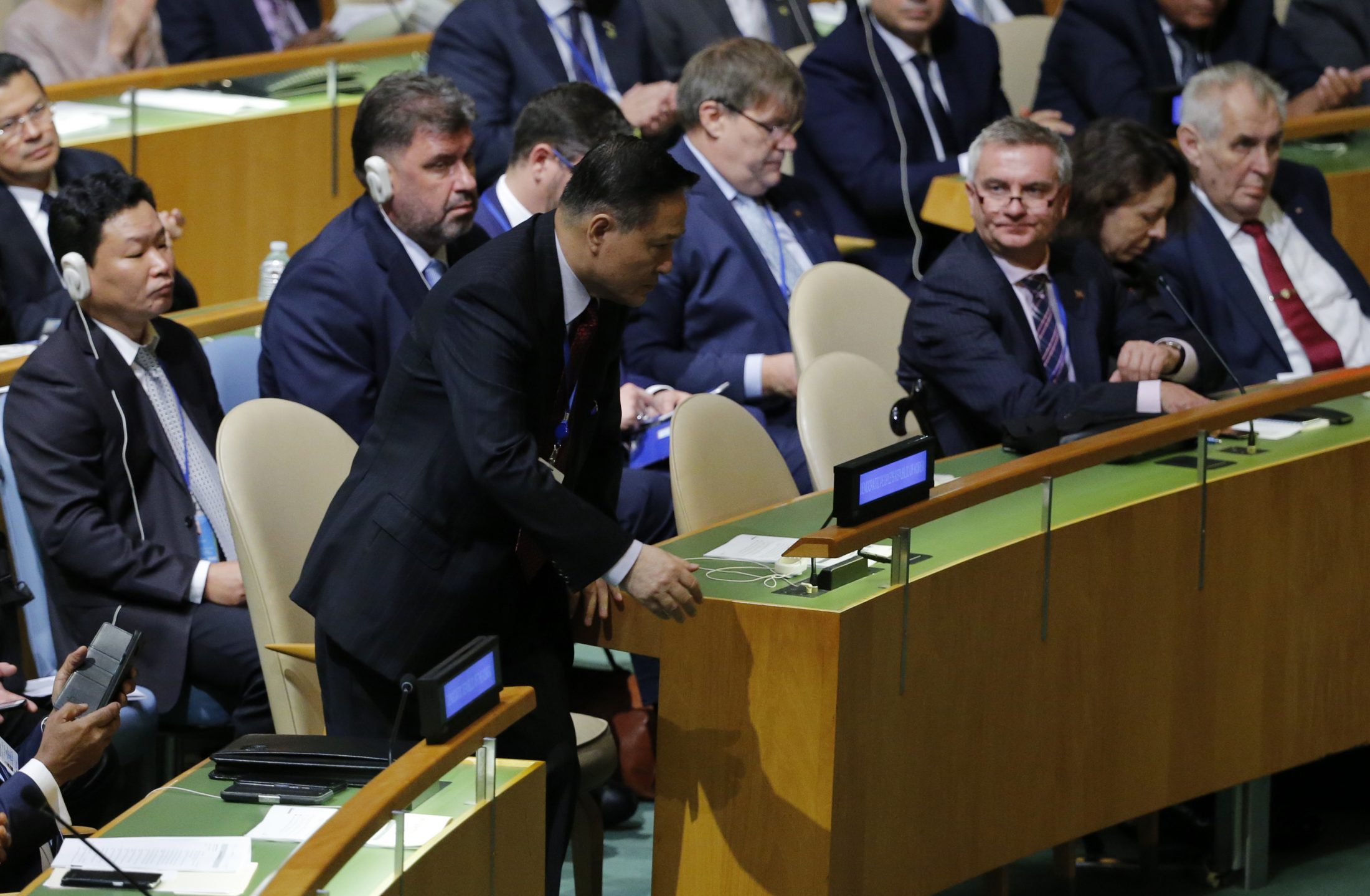 North Korea’s Ambassador to the U.N., Ja Song Nam, leaves his seat prior to the arrival of U.S. President Donald Trump to address the 72nd United Nations General Assembly at U.N. Headquarters in New York. Photo by Eduardo Munoz/Reuters

Addressing the General Assembly is a milestone moment for any president, but one particularly significant for Trump, a relative newcomer to foreign policy who has at times rattled the international community with his unpredictability. He has pulled the Unites States out of multinational agreements, considered shrinking the U.S. military footprint in the world and deployed bombastic language on North Korea that has been criticized by other world leaders.

Trump frequently belittled the U.N. as a candidate and some within his White House believe the U.N acts as a global bureaucracy that infringes on the sovereignty of individual countries. But the president stood before world leaders and a global audience and declared that U.N. members, acting as a collection of self-interested nations, should unite to confront global dangers.

“I will always put American first. Just like you, the leaders of your countries, should and always put your countries first,” said Trump, who assured the U.N. that the United States would not abdicate its leadership position in the world but needed other countries to contribute more.

“The U.S. will forever be a great friend to the world and especially to its allies,” the Republican president said. “But we can no longer be taken advantage of or enter into a one-sided deal in which the United States gets nothing in return

World leaders, many of whom will be seeing Trump in person for the first time, are bound to take the measure of the man and parse his every word for clues on how he views the U.S. role in the world and within the U.N.

“It’s a tremendous opportunity because the world wants to work with the United States if there’s any way to do so,” said Jon Alterman of the Center for Strategic and International Studies. “He has an opportunity to show surprising openness.”

“Such tremendous potential, and I think we’ll be able to do this,” he added.

In brief remarks to the U.N. on Monday, Trump chastised the world body’s bloated bureaucracy and budget, saying, “We are not seeing the results in line with this investment.”

But even with that scolding, Trump pledged to the U.N. that the United States would be “partners in your work” to make the organization a more effective force for world peace.

He praised the U.N.’s early steps toward change and made no threats to withdraw U.S. support. The president’s more measured tone stood in sharp contrast to the approach he took at NATO’s new Brussels headquarters in May, when he upbraided member nations for not paying enough and refused to back its mutual defense pact explicitly.

While running for office, Trump had labeled the U.N. weak and incompetent. He has suggested it was “not a friend” to the United States or democracy while deriding it as “a club for people to get together, talk and have a good time.”

He thundered often about putting “America first,” and has withdrawn from what he considered multilateral agreements that he found unfavorable to the United States, such as the Trans-Pacific Partnership trade deal. He also announced his intention to withdraw from the Paris climate accord, which would leave the U.S. one of only three countries outside the pact. Aides have since suggested Trump would be willing to renegotiate terms of the deal but European leaders have dismissed that approach.

Trump has also frequently questioned the value of a robust American presence around the world. When briefed on the government’s diplomatic, military and intelligence posts, the new president would often cast doubt on the need for all the resources.

Some aides have suggested that Trump employs “principled realism” — making global decisions based on the best outcome for the United States. The administration has also shied away from talk of nation-building or creating democracies through the use of the U.S. military.

But Trump has softened his rhetoric about the United Nations since taking office and cheered the recent Security Council resolution that approved new sanctions against North Korea. Potentially foreshadowing a Trump argument, Brian Hook of the State Department said Monday that the U.N. could be useful as a “force multiplier” to “bring a global approach to global threats.”

“The president has been working very well with the U.N. Security Council,” said Hook, who praised Trump’s ability to deal with the world body and “leverage it for the purposes the U.N. charter created, to save succeeding generations from the scourge of war.”