User Guide: How to Watch the NewsHour’s Election Coverage

Eighteen months of campaigning, highly energetic debates, hot button ballot initiatives and it’s all come down to this. Starting at 7 a.m. Tuesday, you’ll get the PBS NewsHour’s full Election Day coverage. Here’s how you can watch: 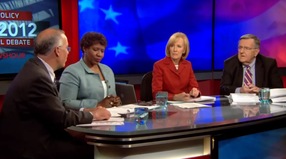 We’ll kick off our on-air coverage with the 6 p.m. ET regular nightly broadcast, and go right into special election coverage beginning at 7 p.m. on most PBS stations. The co-anchor duo of Gwen Ifill and Judy Woodruff will be joined by a cast of analysts including NewsHour regulars syndicated columnist Mark Shields and New York Times columnist David Brooks.

Jeffrey Brown will talk with Stuart Rothenberg of the Rothenberg Political Report and political editor Christina Bellantoni about what the exit polls are saying about the presidential race, and key House, Senate and gubernatorial races.

And correspondent Hari Sreenivasan will offer a deep dive into data through our Vote 2012 Map Center. He’ll also talk to PBS stations in the battlegrounds and states with competitive down-ticket races, including Colorado, Florida, Missouri, Nevada, New Hampshire, Ohio, Virginia and Wisconsin.

Live stream video: Starting Tuesday morning the live video stream (above) will be populated with the NewsHour’s best political coverage from this cycle, interviews with journalists and experts, and the entire politics team offering insight and analysis. That kicks off at 9 a.m. with Hari and Christina and runs all day. 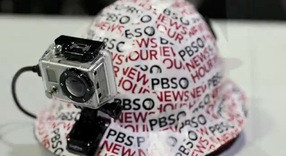 In the evening, we’ll show all of the broadcast coverage, along with special additional footage, in the live-stream video. You can add your comments there. We’ll also see the return of “hat cam,” with reporters donning it stationed at Republican and Democratic headquarters in Washington, D.C.

Live blog: Starting at 7 a.m. ET on Tuesday, our online team will be live blogging Election Day activities with the help of at least a dozen local PBS stations — from Juneau, Alaska, to the Virgin Islands. The coverage continues again at 7 a.m. on Wednesday, when we’ll live blog reaction to the election results.

Subscribe to the Morning Line for analysis in your inbox every day.