VATICAN CITY — Bernie Sanders issued a global call to action at the Vatican on Friday to address “immoral and unsustainable” wealth inequality and poverty, using the high-profile gathering to echo one of the central platforms of his presidential campaign.

The Democratic senator from Vermont cited Pope Francis and St. John Paul II repeatedly during his speech to the Vatican conference commemorating the 25th anniversary of a landmark teaching document from John Paul on social and economic justice after the Cold War.

Sanders arrived in Rome hours after wrapping up a debate in New York Thursday night, saying the opportunity to address the Vatican conference was too meaningful to pass up. The roughly 24-hour visit precedes Tuesday’s crucial New York primary, which Sanders must do well in to maintain a viable challenge to Democratic front-runner Hillary Clinton.

Pope Francis apologized that he couldn’t personally greet participants at the Vatican conference. No meeting with Sanders was expected.

But the trip gave Sanders a moment on the world stage, placing him alongside priests, bishops, academics and two South American presidents. Sanders has been at a disadvantage during his campaign against Clinton, President Barack Obama’s former secretary of state, on issues of foreign policy but he was peppered with questions from academics and ecclesiastics in a manner that might have been afforded a head of state.

Sanders trails Clinton in the Democratic primaries but the trip to the Vatican and his massive rally earlier this week with 27,000 people in New York City may have offered a glimpse of the senator’s aim to become a progressive leader, win or lose.

The discussions gave him a chance to expand on his core campaign messages about the need to reform banking regulations, campaign finance rules and higher education. Asked about inequality in public education, he said it was “beyond disgraceful” and cited challenging conditions in Detroit’s school system.

He told the audience that rather than a world economy that looks out for the common good, “we have been left with an economy operated for the top 1 percent, who get richer and richer as the working class, the young and the poor fall further and further behind.”

“We don’t choose to politicize the pope,” Sanders told attendees, “but his spirit and courage and the fact, if I may say so here, that his words have gone way, way, way beyond the Catholic Church.”

Sanders also warned that youth around the world are no longer satisfied with the status quo, which includes “corrupt and broken politics and an economy of stark inequality and injustice.” 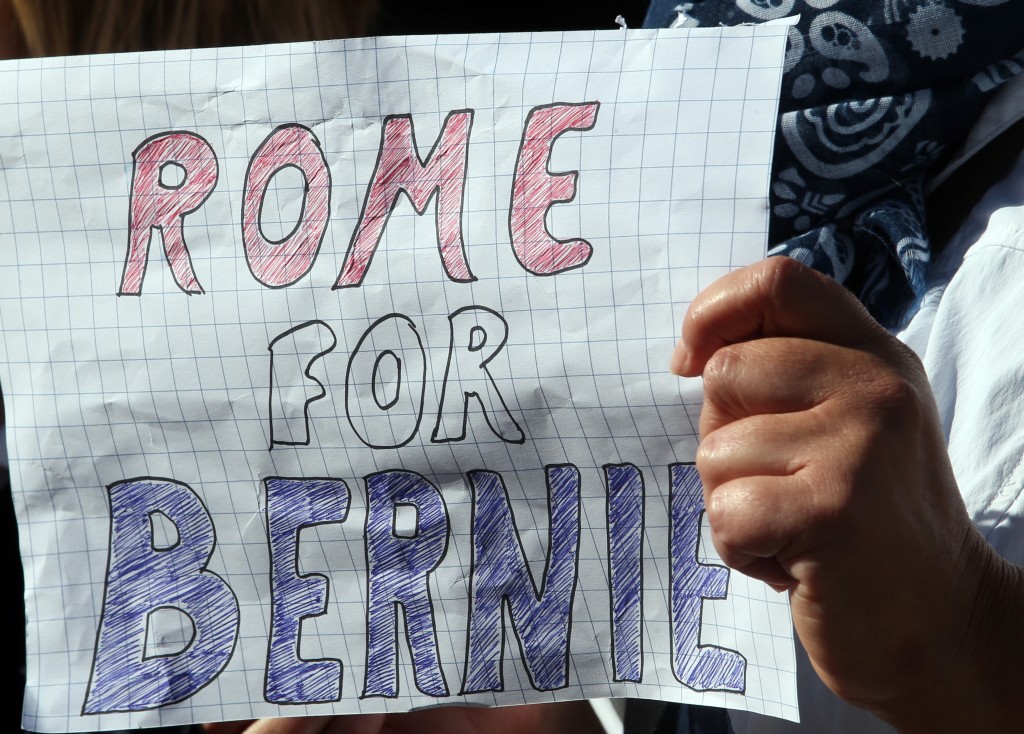 A supporter of Democratic presidential candidate Bernie Sanders holds a welcome sign at the Vatican. Photo by Stefano Rellandini/Reuters

During the meetings, he sat next to the other main guest of honor at the Vatican: Bolivian President Evo Morales, whose is renowned for his anti-imperialist, socialist rhetoric. President Rafael Correa of Ecuador also attended.

As he walked through Vatican City’s Perugino gate, Sanders was greeted about two dozen supporters, some of whom carried signs bearing Sanders’ name. “This is the first candidate I have seen in awhile, a matter of fact my entire life, that I feel like wants to make real changes,” said Kevin Jaksik, 29, of Austin, Texas, who now lives in Rome.

Back home, Clinton holds a significant delegate lead against Sanders, but the senator has vowed to stay in the campaign until the party’s July convention. His message calling for a political revolution to address wealth inequality and the influence of Wall Street on U.S. politics has galvanized many Democrats and independents.

Despite being enmeshed in an increasingly bitter campaign against Clinton, Sanders aides said the trip was not aimed at appealing to Catholic voters who comprise a large share of the Democratic electorate in New York and an upcoming contest in Pennsylvania.

Fact checking the debate: Clinton vs. Sanders on Wall Street

The Vatican has been loath to get involved in electoral campaigns and usually tries to avoid any perception of partisanship involving the pope. Popes rarely travel to countries during the thick of political campaigns, knowing a papal photo opportunity with a sitting head of state could be exploited for political ends.

As a result, the invitation to Sanders to address the Vatican conference raised eyebrows and allegations that the senator lobbied for the invitation.

The chancellor for the pontifical academy, Bishop Marcelo Sanchez Sorondo, has said he invited Sanders because he was the only U.S. presidential candidate who showed deep interest in the teachings of Francis.

The Rev. Matt Malone, editor of the Jesuit magazine America, said Sanders’ trip was unlikely to have much of an impact on Catholic voters, noting that conferences like the one Sanders is attending “happen all the time.”

“I don’t think that Bernie Sanders going to the Vatican is going to help Bernie with Catholics any more than Ted Cruz going to a matzo factory is going to help him with the Jewish vote,” said Malone, who served as a speechwriter to former Rep. Marty Meehan, a Massachusetts Democrat.

But there were other benefits. The trip offered his extended family a brief respite: Sanders was accompanied on the trip by his wife, Jane Sanders, and 10 family members, including four grandchildren.

Left: Democratic presidential candidate Bernie Sanders speaks with media and supporters during his visit to the Vatican. Photo by Stefano Rellandini/Reuters