This report is part of our ongoing Divided by D.C. project, exploring two governors, two visions, one election year. 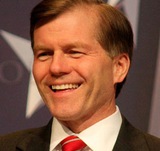 As we reported earlier, Democrats had blocked passage Tuesday because they hoped for $300 million to fund a Metro extension to Dulles International Airport. Democratic Sen. Charles J. Colgan changed his mind Wednesday.

Colgan said he had simply come to the conclusion that the need to pass a state budget outweighed the need to secure funding for the project.

“Nothing’s different,” he said when asked why his position had changed. “It’s just a new day.”

The budget had sailed through the House earlier but became stuck with the Democratic voting bloc on Tuesday.

Republican Gov. Bob McDonnell, who had blamed Democrats for imperiling state services, issued a statement lauding Colgan for his vote and said the longtime lawmaker had “courage,” “statesmanship” and “put policy ahead of politics.”

Budgets are generally a tapestry of compromises. No budget contains funding for every program that each legislator supports. Unfortunately, some Senate Democrats spent the session seeking multiple excuses to vote against the budget, going from committee assignments to education and healthcare funding and finally, yesterday and today, to one earmark for one rail project in one district. Meanwhile, thankfully, other leaders worked together to find common ground and get the job done. That work, based on cooperation and negotiation, built a positive and proactive budget that will benefit all Virginians.

McDonnell pointedly said in his statement that although the budget adds money to the higher education system, it includes no tax increases.

“This is a budget that ensures Virginia’s state government will live within its means, like our families and businesses do every day,” he said.

And addressing one political sticking point sure to resurface this year, McDonnell said the budget “reduces unfunded liabilities in our retirement system by nearly $9 billion by 2031, an historic achievement that ensures our dedicated state employees will receive the retirements they have been counting on.” The NewsHour will be tracking that as it develops.

The divide between Virginia senators illustrates how the state’s voters in the densely populated metro DC area and other large cities often align with Democrats, but the rural southern counties tend to be GOP strongholds.

See our Vote 2012 Map Center detailing the 2008 presidential results for a fuller picture.

We’ll continue to follow the Maryland General Assembly’s difficulties in passing a budget as another example of how national issues are playing out at the local level.