What to watch in Alabama’s GOP Senate primary runoff

Alabama is holding a Republican primary runoff Tuesday for the U.S. Senate seat that used to belong to Attorney General Jeff Sessions. Sen. Luther Strange, who was appointed to fill Sessions’ seat, is running against Roy Moore, a former chief justice of the Alabama Supreme Court. The victor Tuesday is all but assured of winning the general election in December, when the Democratic nominee will face a big disadvantage in staunchly conservative Alabama. Here is a guide to the race:

Proxy battle for the GOP

Tuesday’s special election has turned into a proxy battle between the establishment wing of the Republican Party, which is backing Strange, and the GOP’s far-right base, which has coalesced behind Moore. President Donald Trump and Vice President Michael Pence have campaigned for Strange, and he has also received support from groups allied with Senate Majority Leader Mitch McConnell, R-Ky. Moore has been endorsed by popular conservatives like former Alaska Gov. Sarah Palin.

Incumbent senators rarely lose re-election. But Strange, a former attorney general of Alabama, has held the seat for less than eight months. Moore neutralized whatever advantage Strange may have held by painting him as a loyal follower of McConnell, a deeply disliked figure among many conservative voters. Moore is also well known in Alabama for ignoring a federal judge’s order in 2003 to remove a religious statue from the state supreme court building.

Moore’s outsider strategy appears to have worked. He entered Tuesday with a double-digit lead in most polls and was widely expected to win, barring a come-from-behind upset by Strange. If Moore wins it might encourage other outsider candidates to challenge incumbents in Republican Senate primaries next year, a scenario McConnell would like to avoid as he prepares to defend his party’s control of the Senate.

Senate Republicans currently control 52 seats in the upper chamber. Since his appointment earlier this year, Strange has been a reliable vote for McConnell and GOP leadership. Moore, on the other hand, has vowed to shake up Washington by challenging the status quo. Moore would be another possible thorn in McConnell’s side, giving him one less sure-fire vote to count on at a time when he cannot afford to lose any more votes. If Strange stays in the Senate, McConnell would likely have an easier time passing tax reform — and taking another shot at health care down the line if Graham-Cassidy, the current GOP health care bill, goes down in defeat. With Moore, McConnell’s job would become that much more complicated.

The race is an important political test for Mr. Trump. In backing Strange, Trump, who ran as the ultimate outsider candidate, sided with the Republican establishment. The decision carried clear political risks, even before Moore started surging in the polls. Of the two candidates in the race, Moore more closely embodies the president’s brand of scorched earth politics. But Trump made the calculation early on that maintaining McConnell’s tenuous control of the Senate was worth the risk of angering some conservative primary voters. 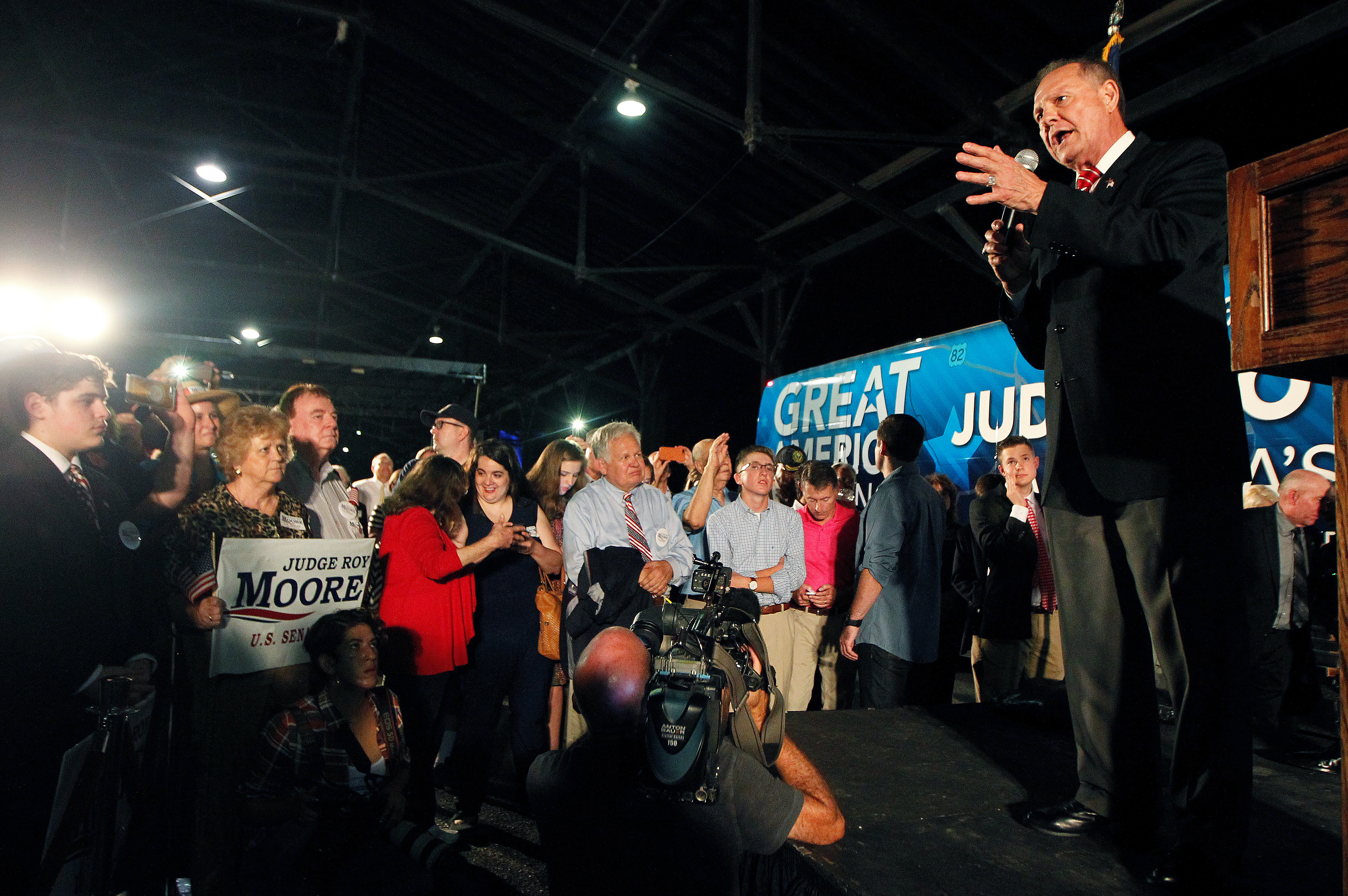 It was a pragmatic move by Trump, who is eager for Republicans in Congress to notch a major legislative victory. Republicans have failed to pass a health care overhaul — the latest effort took a big hit Monday, when Sen. Susan Collins, R-Maine, came out against the Graham-Cassidy bill — and the party will need all the votes it can muster to pass tax reform later this year. Keeping Strange in the Senate seemed like the best way to do that.

But now the decision is in danger of backfiring. Trump put some of his political capital on the line by endorsing Strange, and is facing the possibility that he’ll have nothing to show for it. If Moore wins, it could influence Trump’s strategy for making future GOP primary endorsements.

Republicans hold six of Alabama’s seven congressional districts. In 2016, Trump won at least 63 percent of the vote in every GOP congressional district in the state. Trump remains popular in Deep South states like Alabama, which he won overall by 28 points. But the 2016 map shows some areas of weakness for Trump. Hillary Clinton, his Democratic opponent in the presidential race, carried portions of central Alabama, as well as the county surrounding Birmingham, the state’s largest city.

It will be interesting to see how Republicans vote Tuesday in the moderate parts of the state that went for Clinton. To the extent that the race is a referendum on Trump, a low turnout there would confirm national poll numbers showing Trump’s inability to expand his appeal to moderates and independent voters. On the opposite end of the political spectrum, Trump did best last year in northern Alabama, around the city of Huntsville, and in the state’s southernmost counties, along the Florida panhandle. Those are good places to gauge Moore — and Trump’s — popularity with the party’s far-right base.

Since taking office, Trump has rarely acknowledged making mistakes. When the Senate failed to pass a health care bill in July, he lashed out at Republicans who voted against the proposal, though many privately blamed Trump for not doing more to sell the plan. But at a rally for Strange in Alabama last Friday, Trump admitted that his decision to support Strange may have come at a cost.

The comments underscored Trump’s willingness to quickly change course when it becomes politically expedient, as well as his penchant for deflecting blame. The president’s response to Tuesday’s special election could offer an early clue of how he plans to position himself going into the 2018 midterms, when Republicans will have to run on his record.