What to watch for on Election Day

After 19 months of campaigning, dozens of debates, and countless television ads, the 2016 election comes down to one final day. For Hillary Clinton and Donald Trump, the last few weeks have been all about getting out the vote in battleground states and among key voting blocs. As the day unfolds, we’ll be keeping a close eye on the returns, as well as the broader themes that have dominated the election. Here’s a guide to help get you through Election Day.

Where to look. And when to look there.

Four to 11 of the 50 states will decide this election. The Trump campaign considers these their core four battlegrounds: Florida, North Carolina, Ohio and Iowa. If Trump loses any of these, the campaign (and electoral math) indicate he cannot become president.

When will we have a sense of that? Starting around 8-9 p.m ET on Tuesday. North Carolina and Ohio polls close at 7:30 p.m. ET, and Florida is fully done voting at 8 p.m ET, when polls close in the state’s more conservative panhandle region. If Trump takes all of those states, next check results in Pennsylvania, Wisconsin and Michigan — his campaign would need at least one of those as well as another one or two states.

In addition to watching those battleground states, it’s worth keeping an eye on results in several key swing counties as well. The turnout in these bellwether counties, like Hamilton County, Ohio, (home of Cincinnati) and Clark County, Nevada (home to Las Vegas) will be critical. Trump has made an extended push in Nevada of late, but recently, early voting seems to have swung Clinton’s way. It could signal much about the presidential race, as well as the battle for control of the Senate. Republican Rep. Joe Heck and former Nevada attorney general Catherine Cortez Masto are locked in a close race for the open seat left by retiring Senate Minority Leader Harry Reid.

In 2012, minority voters made up 28 percent of the electorate, up from just 12 percent in the 1980 presidential election. This year, African-Americans, Hispanics and other minority groups will play an even larger role in deciding the final outcome.

Polls show that Donald Trump is on track to do worse with minority voters than Mitt Romney, who won 27 percent of the Hispanic vote and 6 percent of the black vote in 2012. Hillary Clinton is counting on support from Hispanic and black voters to push her over the edge. There are two separate things to watch for here as the exit polls come in on election night: percentage and raw turnout. Let’s take them one by one.

Clinton is counting on support from minority voters to push her over the edge.

In terms of percentage of support, Clinton’s support among black voters has hovered around 80 to 85 percent for several months. That’s in line with the recent historical average for Democratic nominees, though lower than Barack Obama, who won over 90 percent of the black vote twice. Clinton’s support among Hispanic voters is stuck around 66 percent, according to some polls — also slightly lower than the 72 percent that Obama won in 2012, but not by much.

Raw turnout is another story, however. Clinton’s share of the black vote could be just as high as Obama’s, but polls indicate that turnout could be lower, meaning she could end up with fewer votes overall. In 2012, 17.8 million African-Americans voted, according to census data. The question for Clinton is: will the same number vote this time around? Polls suggest a potential bright spot for Clinton with Hispanic voters. Some 13 million Hispanic voters are expected to vote — up from 11.2 million in 2012.

Watch for signs of enthusiasm (like extra long lines at polling locations, and early voting results) in predominantly black and Hispanic communities. They will give a snapshot of how Clinton’s day is going — and whether or not she can win the presidency.

The figurative temperature is more important than the literal one

Every Election Day, much is made of the weather. We are going to essentially ignore that this year, giving you only this link to the forecast. Instead we believe the figurative storms over this country are more important. And the temperature of voters at the polls.

We will be watching for signs of election distress, from accusations of voter fraud to long lines to voter intimidation to potential skirmishes among those waiting to cast ballots. There is seemingly no limit to where this could occur, but one starting place may be the 15 states with new voting laws. Also watch ProPublica’s “Electionland” website where journalists are collecting real-time reports from voters of problems in casting ballots.

The electorate is deeply divided when it comes to the race for the White House. But another picture of the country emerges if you look at state ballot initiatives. Voters in several states are considering a slew of liberal ballot measures, with several likely to pass. If that happens it would indicate that the country as a whole is shifting left on policies from marijuana legalization to gun control.

The various marijuana measures are among the most prominent ballot initiatives this cycle. Five states — California, Nevada, Arizona, Maine and Massachusetts — are voting to fully legalize pot. An additional four states — Florida, Arkansas, North Dakota and Montana — are voting to legalize medical marijuana. Legalization advocates say if a majority of the initiatives pass, the results would signal a tipping point in the national debate over marijuana legalization. Legalization has important implications for several policies areas, including health care and criminal justice reform that touch the lives of millions of Americans.

Minimum wage is also on the ballot in five states. Maine, Arizona, Colorado and Washington are voting on proposals to increase their state minimum wage limits. (South Dakota is considering a measure that would lower the minimum wage for employees under the age of 18). If voters back the minimum wage hikes, they would join several states that have already moved in that direction, and put more pressure on the federal government to follow suit. Whether Congress takes action on the issue next year depends on the next president, and the balance of power in the Senate. In recent years, Democrats have supported a federal minimum wage increase, while Republicans have opposed it.

An election of firsts 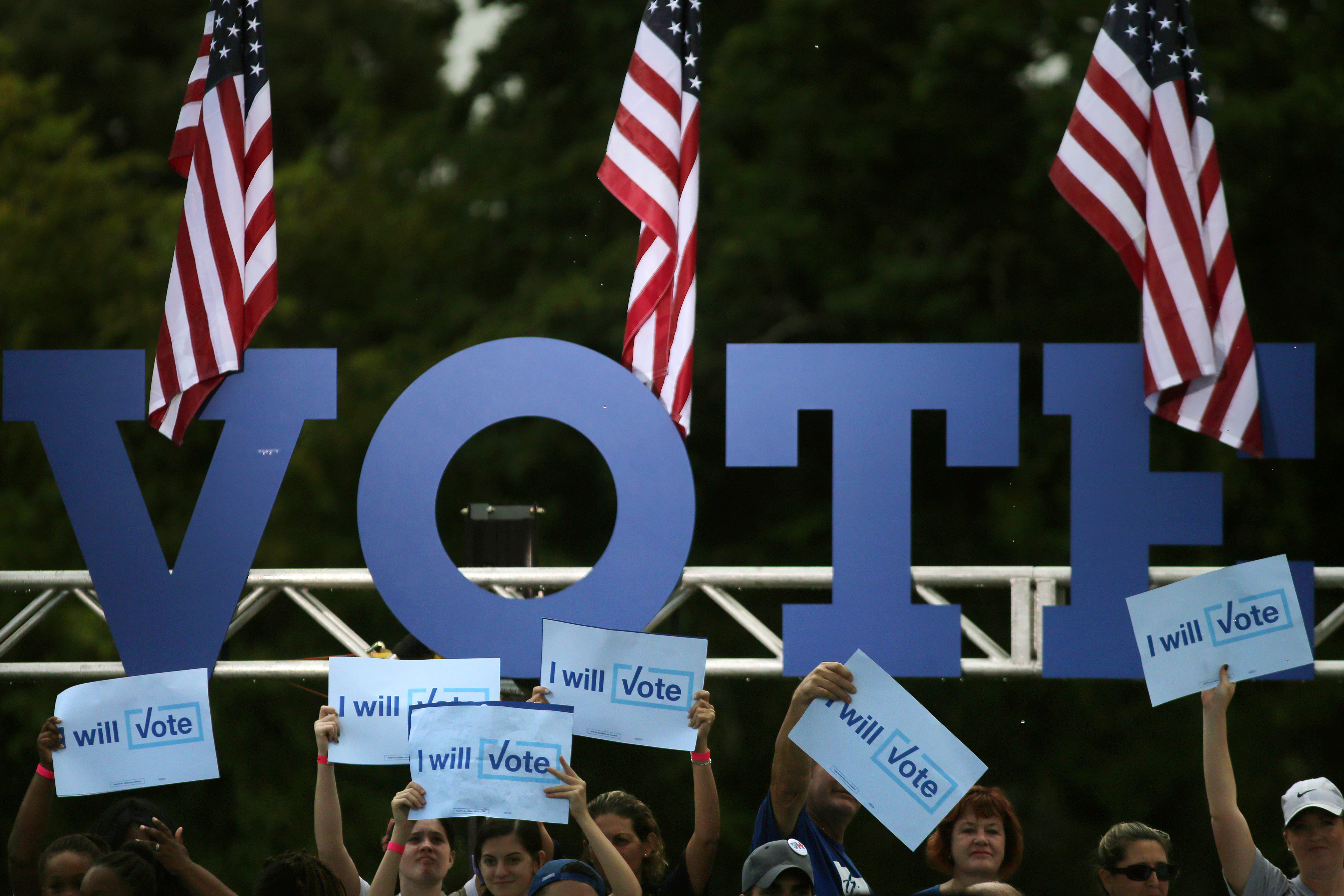 Clinton supporters held up signs at a rally in Florida on Saturday. Photo by Carlos Barria/REUTERS

If Trump wins, he would be the first president since Dwight Eisenhower who never held elected office before seeking the White House. A Trump win would represent a breakthrough for outsider candidates. And of course if Clinton wins, she would become the first female president— a major milestone in the country’s movement toward gender equality.

The last time a major barrier was broken, when Obama was elected president in 2008, millions of Americans responded with spontaneous celebrations that went on for hours after the last polls had closed. A large crowd gathered to celebrate in front of the White House, in Times Square, and elsewhere across the country. Whether you voted for Obama or not, the night held a special historical significance.

It’ll be interesting to see what happens this year, especially if Clinton wins. Will her supporters react to her achievement with the enthusiasm that greeted Obama’s victory eight years ago? Will Trump supporters acknowledge that Clinton made history? Or is the nation too divided to pause and process the moment? The election has fostered a national conversation about gender that is bound to continue long past Election Night. Whatever shape it takes, the public’s initial response, if Clinton wins, win will speak volumes about how far we’ve come as a country.